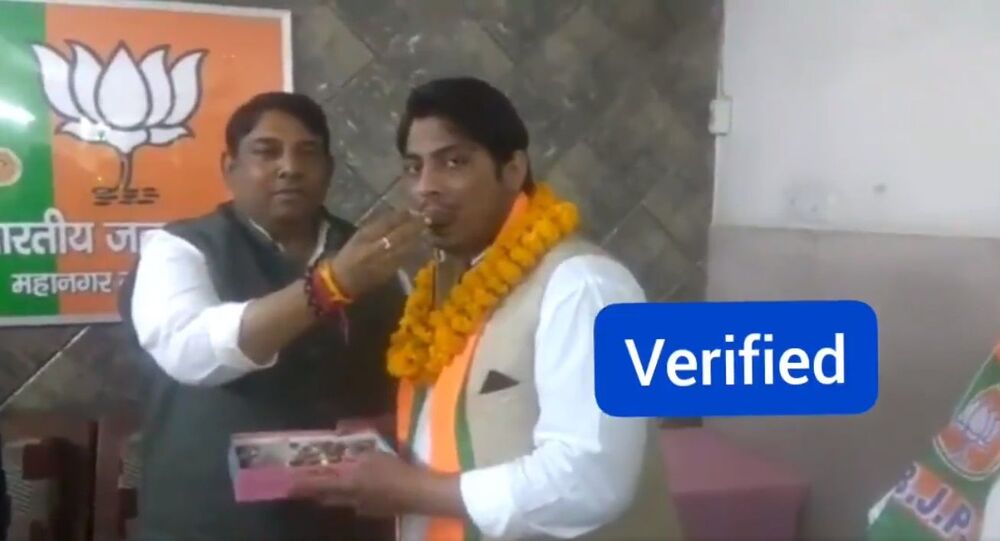 On 1 February, a man was arrested for brandishing a gun and firing three rounds of shots in the air in the Shaheen Bagh area of Delhi, where hundreds of Muslim women were protesting against the controversial Citizenship Amendment Act (CAA).

A 25-year-old man, who stunned everyone earlier this year by firing gunshots in the air at the site of a preaceful protest by women to oppose the amended Citizenship law, has joined India's federally ruling party the BJP. However, hours after his induction into the party, the BJP cancelled Gurjar's membership.

​On Wednesday, Kapil Gurjar joined the Bharatiya Janata Party (BJP) in the Ghaziabad district of Uttar Pradesh, which is located near the Indian capital of New Delhi.

A video of Gurjar wearing a saffron cloth, symbolic of the BJP and joining them surfaced on Twitter from the party's office.

After taking the political plunge, Gurjar said he had decided to join the BJP because the party works for Hindutva, popularly described as a form of nationalism followed by many Hindus in India.

When Gurjar was arrested in Delhi for firing in the Shaheen Bagh area in February, it was alleged that he and his father Gaje Singh had been members of Delhi's ruling Aam Aadmi Party (AAP) since 2019.

The Delhi Police also found some pictures on his phone of him with senior leaders of the AAP like Sanjay Singh and Aatishi along with his supporters.

Both the AAP and Gurjar's family, however, refuted the claim. At the time, the family had told the media that Kapil Gurjar's father had run in the Municipal Corporation of Delhi (MCD) election in 2012 on a Bahujan Samaj Party (BSP) ticket and lost but they have never been associated with AAP.

Netizens on Wednesday are not leaving any stone unturned to slam the BJP over Gurjar joining the party.

Earlier this year, various Muslim-majority protests, including the one in the Shaheen Bagh area, were being staged against the central government for having introduced a citizenship law that, according to them, "discriminates" against illegal Muslim immigrants.

Enacted in December 2019, the CAA grants citizenship to Hindus, Sikhs, Christians, Buddhists, Jains, and Parsis from Pakistan, Bangladesh, and Afghanistan, who arrived in India before 31 December 2014. The law, however, excludes Muslims, which angered many people, who view it as discriminatory and unconstitutional - something the federal government strongly denies.