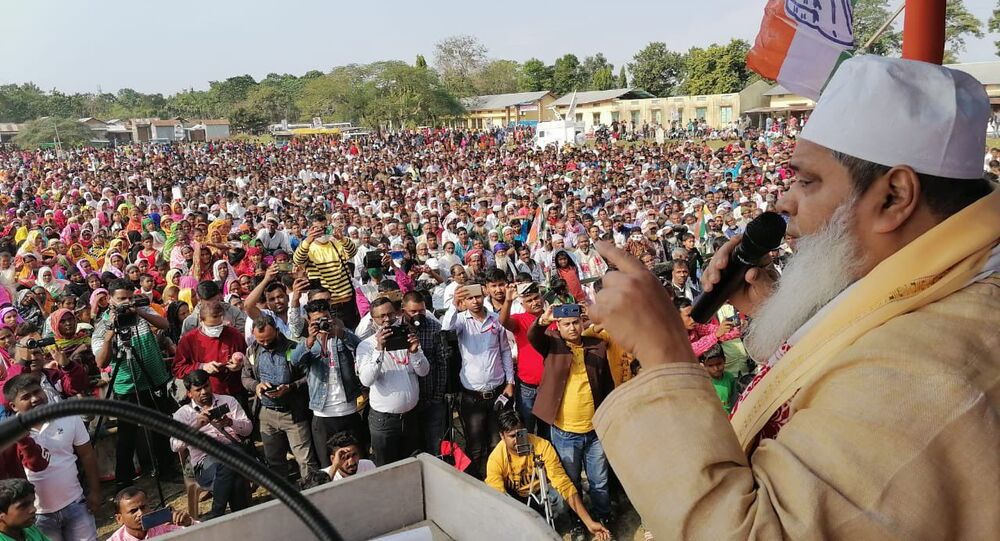 The issue of foreign funding from Chinese companies has become a sticking point in India since the beginning of the border standoff between the Indian Army and People's Liberation Army (PLA) in May this year. In recent months, several companies, including newspapers, have been criticised for accepting donations from Chinese companies.

Records unearthed by an Indian nonprofit on Wednesday have shown that a trust run by Badruddin Ajmal, the leader of the political outfit All India United Democratic Front (AIUDF), allegedly accepted donations from a Chinese government-linked company in 2013-14.

​Legal Rights Observatory (LRO), the group behind the complaint, informed Sputnik that the transaction is currently being probed by India's home ministry. India's rules prohibit NGOs from receiving donations from foreign companies for a "political purpose".

LRO has further called upon Ajmal to explain the reason why his NGO Markazul Ma'arif accepted donations from a Chinese company, citing reports of the alleged persecution of Uyghur Muslims by authorities in China's Xinjian province.

Ajmal, a parliamentarian in India's lower house, has a political following among Muslims in his home state of Assam.

According to government records, Markazul Ma'arif received a donation of more than $16,000 from Guangzhou-based Reem International Hong Kong Limited. Indian government records show that the donation was "institutional" in nature and was made for a "social" purpose.

Markazul Ma'arif describes itself as the "largest humanitarian NGO" in India's north-east region and claims to be involved in running educational institutions for economically backward sections of the society, among various activities.

Ajmal has featured among the world's 500 'Most Influential Muslims', in a list compiled by the Jordan-based Royal Islamic Strategic Studies Centre.

A representative from Markazul Ma'arif has said that the past donations received by the NGOs were "deliberately" being raked up by Ajmal's political opponents, mainly Indian Prime Minister Modi's Bharatiya Janata Party (BJP), ahead of the state election in Assam next year.

"The insinuation that we accepted money from foreign NGOs for a political reason is politically motivated and malicious in nature," he told Sputnik, adding that all the funds received from overseas were already on government records and in "accordance" with rules.

Over 35 percent of Assam's population professes Islam, making Muslims a deciding factor in election outcomes in the state.