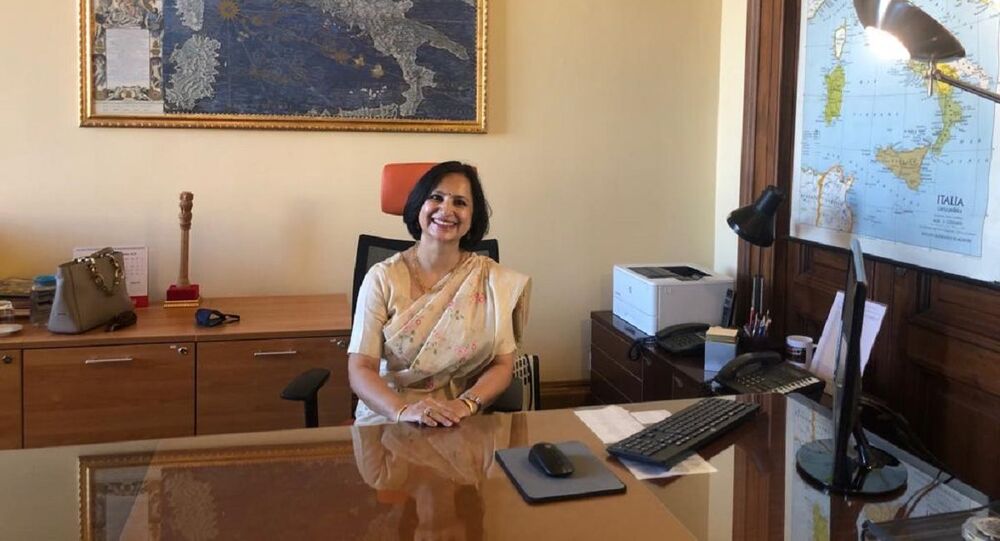 The visit to the Italian Sikh temple by India's Ambassador to Rome Neena Malhotra this week followed a visit by Prime Minister Narendra Modi to a prominent New Delhi-based Sikh shrine. The visits are being viewed as part of New Delhi's massive outreach efforts to the Sikh community amid the ongoing farmer protests.

The Indian Embassy in Italy is facing flak on social media after it claimed that New Delhi's envoy to Rome Neena Malhotra had been 'felicitated' during her visit to a Sikh temple in Rome to mark the anniversary of Guru Tegh Bahadur’s death.

However, it has now emerged that Malhotra was, in fact, heckled by members of the Gurudwara (Sikh Temple) management committee while she was speaking in support of India’s new farm laws, which have served as the impetus for massive protests against Prime Minister Narendra Modi’s government for more than three weeks.

At a Gurdwara Sahib in Italy the indian ambassador, Nina Malhotra, was stopped from speaking against the Kisaan agitation by a member of the Sangat.

No politician or government representative should be allowed to speak from the stage in the Guru’s Darbar. pic.twitter.com/eDWi7t1d3N

​Social media users are now questioning the credibility of the Indian mission’s claims, with some describing the embassy’s account of the visit as ‘manipulative’.

​The farmer protests in India have attracted significant global attention, with lawmakers from the US, Canada and the United Kingdom backing the farmers' right to protest against the new laws, which are aimed at liberalising agricultural markets.

New Delhi has been scathing in its response to what it has described as "unwarranted" interference, even summoning Canada's High Commissioner to New Delhi Nadir Patel earlier this month over Prime Minister Justin Trudeau's remarks expressing solidarity with the protesting farmers.

Amid the ongoing farmer protests mainly at the state border of India's capital Delhi, Prime Minister Modi also paid a visit to the Rakabganj Gurudwara (the Sikh temple) in New Delhi over the weekend to commemorate the anniversary of the death of Guru Tegh Bahadur, one of the 10 founders of the Sikh faith.

Political observers believe that Prime Minister Modi’s visit was part of the federal government's outreach towards the Sikh community. The ongoing agitation at Delhi is being mainly led by farmers' unions from the predominantly Sikh state of Punjab.

During his several appeals to the protesters, Modi has repeatedly claimed that the new farm laws would boost the income of Indian farmers as more private players would queue up to buy their produce.

The protesting farmers have rejected the Prime Minister's assurance, arguing that the new liberalising measures would lead them to being held hostage by private companies.

The farmers, during several rounds of negotiations with the authorities over the last few weeks, have warned that they would continue with their agitation unless the new laws are repealed.