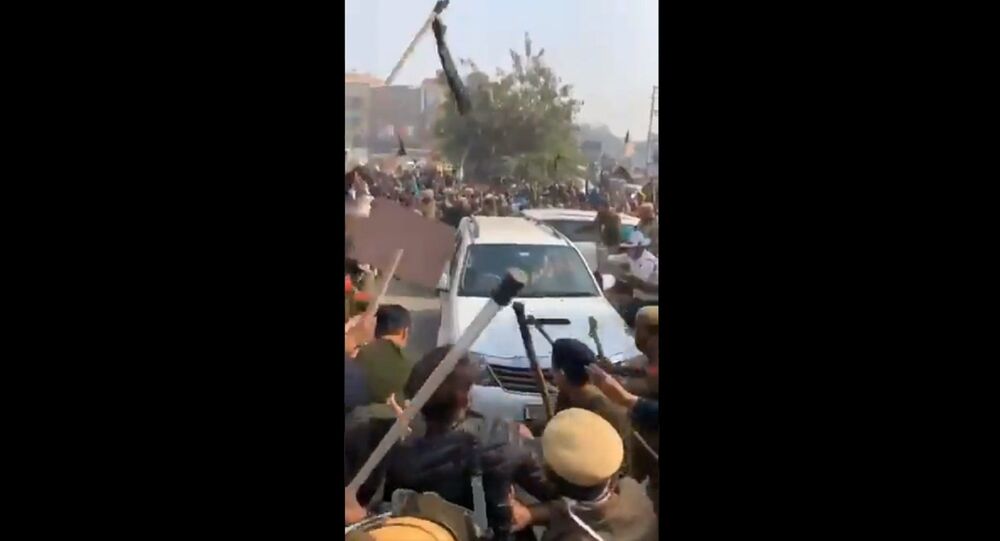 As farmers’ agitation against three farm laws entered its 27th day, the protest shows no indication of losing its steam in near-zero temperatures. Thousands of farmers from states such as Uttar Pradesh, Maharashtra, have started marching towards Delhi as states and federal government forces have tried to stop them with force at various points.

As the government employed barricades and police to prevent farmers moving from different parts of the country towards Delhi, the demonstrators have seen red and and attacked senior police officers in the Rampur district of Uttar Pradesh State on Tuesday evening.

The images captured by locals, which went viral on social media, show the car belonging to Moradabad Senior Police Officer, Prabhakar Chaudhary, coming under attack when thousands of farmers from Bareilly, Pilibhit and Puranpur districts were stopped by police at Rampur.

​The officer fell on the ground in a scuffle with the farmers, leaving him with minor scratches. Later, with the help of other police officials and constables, Chaudhary managed to escape from the scene.

In Haryana, hundreds of farmers showed black flags to state's chief minister, Manohar Lal Khattar, while he was on his was to Ambala on Tuesday. The Haryana government is also using force to stop farmers at national highway who are trying to join the protests on the outskirts of Delhi.

Meanwhile, India’s main opposition Congress announced on Tuesday evening that the party, under the leadership of Rahul Gandhi, will submit to India's president, Ram Nath Kovind, on 24 December signatures of around 20 million farmers from around India, urging the withdrawal of three farm laws.

Since 26 November, thousands of farmers have adamantly demanded completely rolling back the three new farm laws and blocking the three highways which connect Delhi to the rest of the country. Indian Prime Minister Narendra Modi argues that the reforms, which were passed in September, were long overdue and any opposition to this would be detrimental to investment and modern technologies for the sector. Although farmers agree that their sector is in dire need of reform and modern practices, they say Modi’s “historic” reforms will leave them at the mercy of big corporations.