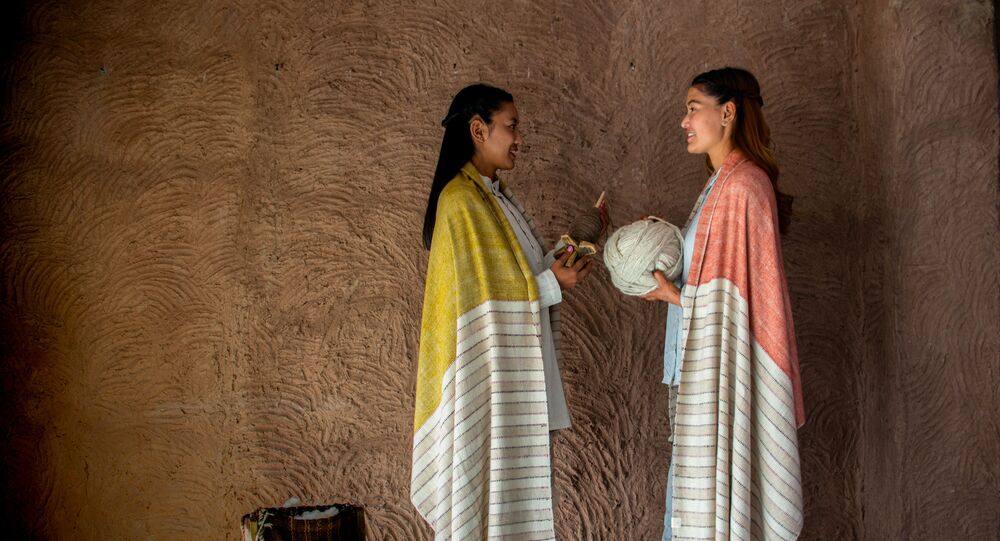 Soft as a feather and very warm, Pashmina fabric made from the fleece of Himalayan goats is widely produced in India's Ladakh region. Along the ancient Silk Road connecting China with the Middle East and Europe, it was regarded as one of the most prized articles exported worldwide. This rich legacy is now being carried forward by youngsters.

Sonam Angmo, 32, and Stanzin Minglak, 32, are two entrepreneurs from India's Ladakh region who started an all-women Leh-based startup - Lena Ladakh Pashmina which is empowering female weavers, artisans, and nomadic shepherds by giving them employment and a source of income.

© Photo : Lena Ladakh Pashmina
The Youth of Ladakh Take Pashmina on Their Own Hands to Removing The Kashmiri Tag (1)

Their business in centered around the real pashmina fibre procured from Himalayan goats, touted to be one of the costliest fabrics and with a starting price of around $250.

"Because the fibres are hollow and very fine, the woven and knitted pashmina fabric becomes much lighter and softer than other kinds of wool. These properties make pashmina about eight times warmer than sheep wool", says Sonam who exports pashmina shawls and scarfs to Switzerland, Boston, and San Francisco.

© Photo : wangial lakrook
The Youth of Ladakh Take Pashmina on Their Own Hands to Removing The Kashmiri Tag (2)

In the 18th century, along the ancient Silk Road connecting China with the Middle East and Europe, pashmina was one of the most prized articles exported worldwide.

"These pashmina caravans travelling from Ladakh were known to have travelled through the roads to Europe in the 18th century when it first caught Napoleon's attention during one of his expeditions in Egypt", Sonam says.

Despite being the big source of raw pashmina, the Ladakhi people were unable to reap the benefits of its richness as compared to those in Kashmir.

"These raw fibres would be traded to Kashmiri traders who learned the incredible skill for spinning and weaving the famous Kashmiri pashmina shawls. So much so that in the West, pashmina came to be known as cashmere after Kashmir", Sonam adds.

Creation of the Startup

The seeds of this venture were sowed in 2013, when Stanzin Minglak was working on her thesis - "Migration Pattern of Ladakhi Shepherds". During her stay with a nomadic community in the Changthang Plateau, she realised that Ladakh was only exporting raw pashmina while its real value is in selling finished products.

"The Handloom Department of Ladakh selects 300 women every year from all over the district and trains them in elementary weaving and spinning. I realised that these women had little to no opportunity to apply their newly acquired skills. So, the idea to fill the gap in the market and readily available skilled artisans gave rise to Lena", she says.

With an urge to do something positive for the nomadic community, Stanzin's friend Sonam teamed up with her.

Both Sonam and Stanzin are not only empowering local artisans and shepherds but also design and hand-dye pashmina products using natural techniques.

Known as Changra Pashmina, this incredible fibre comes from the high-altitude goats (Capra Hircus) herded by the nomadic communities of the Changthang Plateau (eastern Ladakh and western Tibet).

"The pashmina fibre grows on the goats only in the winters when the temperature drops to minus 40 degrees at an altitude of about 17,000 feet in the Changthang Plateau. The herbs grown at those elevations which the goats consume is also said to be one of the important causal factors of the high quality of fibre", Stanzin says.

With the onset of spring, the fibre naturally starts shedding. That's when the shepherds comb the molted fibre off the goats at a shearing plant where it is cleaned and ready to be spun.

"The annual yield of raw pashmina fibre from one goat is about 250-300 g. Out of this, only 30% of the fibre is rendered usable. Hence, it takes the annual fibre from three goats to make one medium-sized pashmina scarf", Stanzin says.

© Photo : Lena Ladakh Pashmina
The Youth of Ladakh Take Pashmina on Their Own Hands to Removing The Kashmiri Tag (3)

Coming from a family of spinners and weavers, Tsering Youtol, 54, from Zanskar, has been working with many women from her valley to preserve textile art.

"We source the raw wool and fibre from Zanskar and the Changthang Valley where goats, sheep, and yak are reared. After hand-sorting the fibre according to their lengths, the wool is hand-spinned with a spindle and prepared through plying and milling techniques. Then it goes through different processes of weaving to make rugs, carpets, and fleece", Tsering says.

© Photo : Lena Ladakh Pashmina
The Youth of Ladakh Take Pashmina on Their Own Hands to Removing The Kashmiri Tag (4)

More than 58 women artisans at Lena work from home, and some engage seasonally due to harsh winters that drop to minus 20 degrees Celsius.

Tashi Yangskit, a 45-year-old woman from the village of Temisgam in Ladakh, is an expert in handspun and handwoven skills and feels that this traditional technique is rare in today's age.

"Weaving has its own language. It has many processes and requires discipline from start to end. It's a work of two weavers on a piece. The piece comes out best when your hand coordination harmonises with that of your partner weaver. The whole process to weave one piece takes four to five days", says Tashi, who makes 15 – 20 pieces a month, earning her an income of around $200.

© Photo : Lena Ladakh Pashmina
The Youth of Ladakh Take Pashmina on Their Own Hands to Removing The Kashmiri Tag (5)

As many youngsters are now getting into the handloom and textile industry in Ladakh, which also holds fashion shows, Tashi feels glad looking at the way the textile revolution is taking place.

"The majority of women in Ladakh are into weaving. I like the fact that people are turning to handwoven fabrics to make jackets for the long, cold winters", she says.

Cashmere revolution is brewing in Mongolia

Makers of Luxury Pashmina Shawls Struggle to Survive in Kashmir