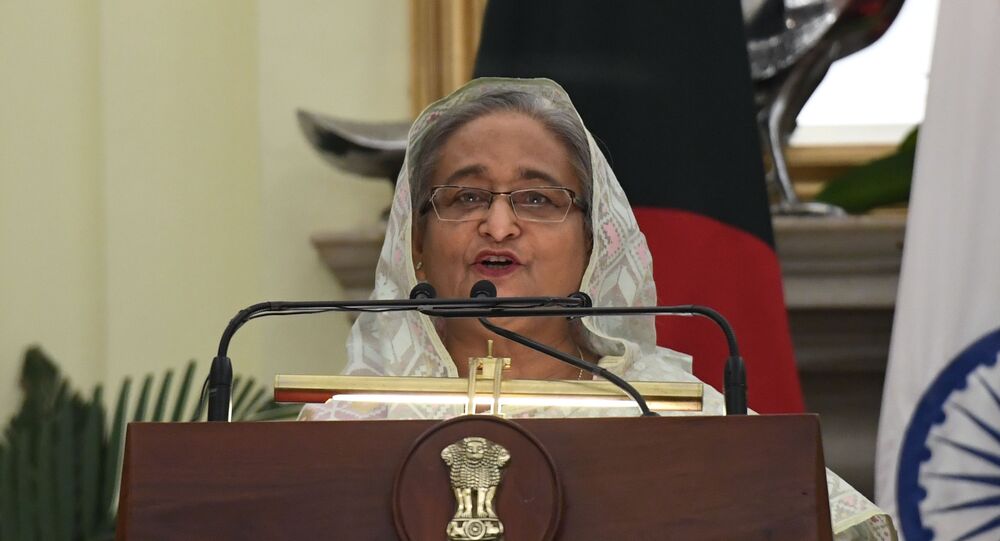 Bangladesh split from Pakistan in 1971 after India's then-Prime Minister Indira Gandhi ordered a military intervention, as she faced an influx of millions of refugees escaping alleged persecution from Pakistani forces cracking down on independence.

Saying that a number of defeated forces that sided with Pakistan in the 1971 War of Liberation wanted to take Bangladesh back to "old days", Prime Minister Sheikh Hasina made a strong pitch for communal harmony in her Victory Day speech as the South Asian country celebrated the 49th anniversary of its founding on Wednesday.

"Bangladesh is a country of communal harmony. It was liberated with the blood of Muslims, Hindus, Buddhists and Christians," stated Hasina, addressing the country in an 18-minute long speech.

"The people of Bangladesh are religious, not fanatics. We must not allow the anti-liberation radical forces to make religion the weapon of politics," stated the Bangladeshi prime minister.

​Further calling upon the citizens to respect the "Liberation War spirit of communal harmony", Hasina reminded them of the country's rich literary heritage as he noted the contributions of Nobel laureate Rabindranath Tagore, Fakir Lalon Shah, and Kazi Nazrul, among others, in shaping the country's national identity.

"Some people who were defeated (fighting) against Bangladesh in 1971 are trying to confuse the people by telling lies and distortions of history and religion in an attempt to create unrest," Hasina said against the backdrop of recent protests by pro-Pakistan Islamist groups over the installation of a statue of country's founding father, Sheikh Mujibur Rahman.

​The protests have triggered a sharp reaction from Hasina, who earlier this month stated that Bangladesh would never be able to forget the atrocities committed by Pakistani forces in 1971, in the lead-up to independence on 16 December. Significantly, Hasina's remarks came after a meeting with Islamabad's envoy to Dhaka Imran Ahmed Siddiqui.

Islamabad has never officially apologised to Dhaka for the incidents of 1971, when Pakistan forces are said to have killed nearly three million Bangladeshis during a brutal crackdown to suppress the pro-independence movement in the Bengali-speaking country. Bangladesh (formerly known as east Pakistan) had been a part of Pakistan when the latter became an independent country in 1947.

Amid Pakistan's crackdown in 1971, nearly 10 million Bangladeshi refugees fled to India, creating an unprecedented humanitarian situation which ultimately prompted New Delhi to stage a military intervention in the country.

Nearly 93,000 Pakistan Army soldiers surrendered to liberation forces, led by the Indian Army, which is often described as one of the biggest surrenders in history.

Indian Prime Minister Narendra Modi on Wednesday laid a wreath at the National War Memorial in New Delhi to commemorate the victory of India-led forces in the 1971 war, regarded as one of the nation's greatest military successes since Independence in 1947.

Many Indians also took to social media on the occasion of Bangladesh's Victory Day to remember the events of 1971, when the two countries drove Pakistani forces out of the territory.

India's key opposition figure Rahul Gandhi, whose grandmother and former Indian prime minister Indira Gandhi had often been credited with the creation of Bangladesh, used the occasion to target his own government for its alleged failure to maintain the integrity of Indian borders.

"There was a time when our neighbours used to respect our borders," said Rahul Gandhi, in a veiled reference to the ongoing border standoff with China.

​The Congress Party has been vocally critical of the Narendra Modi government over its perceived inability to regain the territory in eastern Ladakh, the site of an ongoing face-off between the People's Liberation Army (PLA) and the Indian Army.

Other social media users, meanwhile, recalled the bravery of the Indian Army in marching into Dhaka and fighting the Pakistan forces.

On this in 1971, Indian Army defeated Pakistan n created a new nation Bangladesh.
..And 93,000 Pakistani soldiers SURRENDERED..yes 93000 ; biggest ever surrender of history !
Salute to our heroes who fought 71...Nation is proud of you all💪
Salute 🌺🙏Jai Hind 🇮🇳#VijayDiwas pic.twitter.com/jmWpHY5lN0