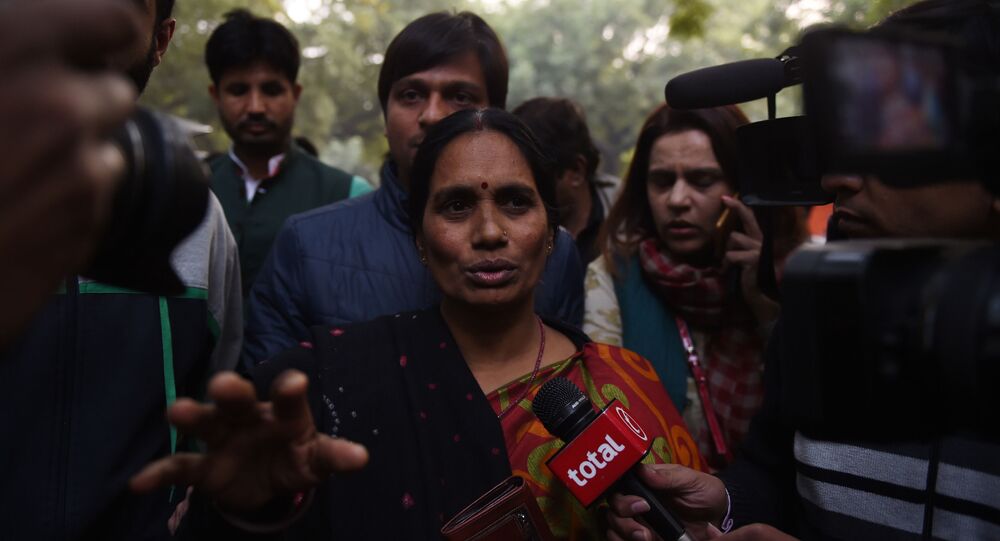 On 16 December 2012, six men raped and mortally wounded a 23-year-old woman in a moving bus in the Indian capital. The incident sent shockwaves across the country, with people demanding justice for the young woman, who later became known as 'Nirbhaya', or 'Fearless'.

"Despite getting justice for my daughter, I'll not sit in silence but will continue to fight for all other rape victims," says the mother of Nirbhaya, the 23-year-old physiotherapy student who was gang-raped in a moving bus on this day eight years ago.

Remembering her daughter's rape and murder, the woman, who has remained anonymous for safety reasons, tells Sputnik that even today she sees the shadow of 'Nirbhaya' in every rape victim and other girls.

"I like to spend time with girls around me as I find my daughter's shadow in them. The struggle I have gone through... No mother or family member should go through that," she says, adding that her help and support for rape victims seeking justice is the best tribute that she can pay to her late daughter.

After more than a seven-year legal battle, four out of the six men accused of gang-raping the woman were hanged at the Tihar Central Jail in Delhi.

"She has got justice but my fight against offences against women will continue in the future. I will always stand and show my solidarity with every rape victim. I will fight for justice for other women, who have faced similar situations to that of my daughter," Asha Devi tells Sputnik.

Speaking about the death sentence given four of the accused in her daughter's case, she says: "The hanging of the convicts sent a strong message in society and created fear (of breaking) laws among other criminal offenders."

According to the National Crime Record Bureau (NCRB), 88 rape cases were registered every day in 2019, and the total figure was 32,033.

Asha Devi today strongly believes that rape cases can be controlled by changing the mindset of the people and if police administration performs its duty honestly. To support her logic, she also recalls the Hathras incident, which occurred in September, where the dead body of a rape victim was cremated late at night by Uttar Pradesh state police.

In Uttar Pradesh state’s Hathras district, a 19-year-old-girl was allegedly dragged away by four men, who brutally assaulted her after raping her. She was later found in an unconscious state with her tongue cut and her spine severely injured.

Controversy erupted after the family of the victim who died during treatment at a Delhi hospital on 29 September this year, alleged that the State authorities cremated her body late night without their consent. It triggered a nationwide outrage. The local authorities, however, claimed they had the family’s consent.

Nirbhaya’s mother also is convinced that everyone needs to raise their voice against rape, and a day will come when "all the daughters" will feel safe in India.

In Nirbhaya’s case, the Delhi Police had arrested all the six rapists but the prime accused Ram Singh allegedly committed suicide in jail, while another one was a juvenile and thus he was let out after serving three years in a reform facility.

2012 Delhi Gang Rape: Four Convicts to be Hanged on 20 March