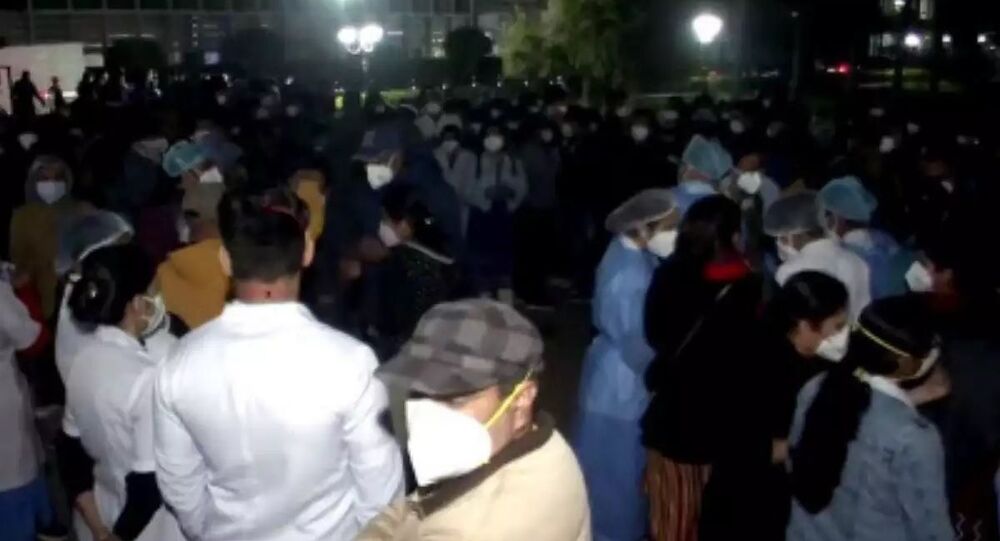 The social and economical climate in India is presently clouded with unrests and protests. Be it the farmers frustrated with the new farm laws or the workers at mobile factories awaiting their pending salaries – the country has been engulfed in various protests. Amid these crises, some healthcare workers have voiced their discontent.

This week began with around 5,000 nursing staff from Delhi’s reputed All-India Institute of Medical Sciences (AIIMS) hospital declaring an indefinite strike, citing “anomalies” in their salaries as the main reason.

© REUTERS / DANISH SIDDIQUI
Thousands of Workers Linked to COVID-19 Relief Call to Strike for Basic Amenities in India
The healthcare workers are demanding salary hikes as per Indian government’s 6th Pay Commission, which was rolled out in July 2006 and is focused on removing ambiguity with regards to various pay scales in government jobs while guaranteeing incremental pay raises at regular intervals.

Videos of the strike have gone viral on social media – testifying to the strength of the union of healthcare professionals. The staff can be heard chanting slogans calling for the fulfilment of their demands in unison.

AIIMS Nurses Strike Update:
This is how Corona Warriors are treated now at AIIMS by Police And guards at AIIMS.A Nursing officer is being injured and has been shifted to Safdurgung hospital. @drshamamohd @ShashiTharoor @ArvindKejriwal @Pawankhera #Nursesunityzindanad pic.twitter.com/GEQUl3v84W

​As the nursing and paramedic staff decided to go on a strike, the emergency services at AIIMS in the national capital have been affected drastically, even resulting in the abandonment of patients who require critical care.

​According to AIIMS head Dr. Randeep Guleria, the nurse union had put forward 23 demands and “almost all of them have been met by the AIIMS administration and the government”, the media has reported. As of now, only payments remain an issue.

This strike by AIIMS comes just days after doctors across the country joined in to protest against the government order allowing Ayurveda practitioners to perform surgical procedures following training.