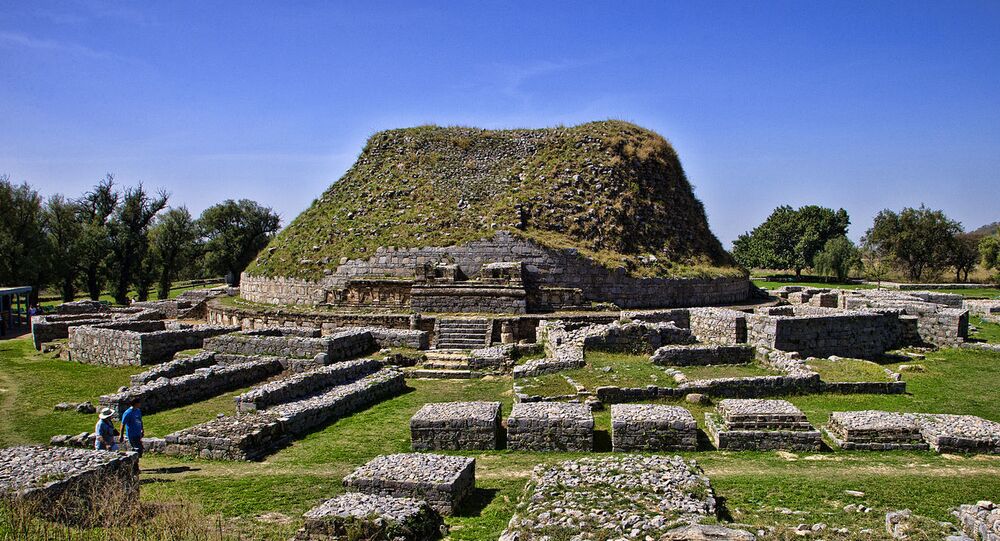 The ancient city of Takshashila in modern-day Pakistan has often been regarded as one of the oldest human settlements on the planet. During the course of its existence, the city was occupied by Alexander the Great, Persian rulers, as well as ancient India’s Maurya Empire, among others.

Indian social media users have lashed out at a serving Pakistani diplomat who claimed in a tweet that the ancient Takshashila University had once been part of “Ancient Pakistan”.

An aerial, reconstructed view of Taxila (Takshashila) University, which existed in ancient #Pakistan 🇵🇰 2700 years ago near today's #Islamabad. Over 10,500 students from 16 countries studied 64 different disciplines of higher studies taught by scholars like Panini.
📸 @hannan021 pic.twitter.com/xRC5mdkb6g

​The post by Qamar Abbas Khokhar, Islamabad’s acting ambassador to Hanoi, Vietnam, hasn’t gone down well with Indian social media users, who reminded the envoy that his country only officially came into existence in 1947.

Many Indian Twitter users also pointed towards the Buddhist heritage of Takshashila University, which has been documented to be among the oldest centres of higher learning in the world.

There was no ancient Pakistan. There was no Pakistan before Aug 14-15, 1947, let alone 2,700 years ago. Panini & Chanakya taught at Takshashila university. Chanakya mentored Chandragupta Maurya whose empire was spread across the Indian sub continent, capital at Patliputra (Patna) https://t.co/02uCAbhmUi

Your history begins in 1947. There is no ancient Pakistan. https://t.co/njWrUXFID6

2700 yrs ago there was no Islam, how can there be ancient #Pakistan ? Isn't it the original #IslamicState ..Takshashila represented the Hindu-Buddhist civilisation - the cultures of Kafirs. https://t.co/tdJjrpzGW0

​Ancient Takshashila is regarded as being among the oldest settlements in the world, with some records tracing its founding back to the Neolithic Age (7,000-1,000 BCE). As per some accounts, the university was founded in around 500 BCE. At its peak, it had scholars from ancient China as well as Persia (modern day Iran) in the west.

A United Nations Education Scientific and Cultural Organisation (UNESCO) world heritage site, Takshashila was located on the eastern banks of the Indus River in what is now Rawalpindi city in modern-day Pakistan.

The settlement has been a subject of fascination for foreigners for centuries, with Macedonian conqueror Alexander the Great invading the city during his push eastward in around 326 BCE, as per historical records. The Indus river settlement also features in the writings of Chinese Buddhist traveller Faxian, who visited the subcontinent during the third and fourth centuries AD.

The city has changed hands on several occasions during its existence, as it also became a part of ancient India’s Mauryan Empire.

Islam arrived near the Indus River settlements such as Takshashila only after seventh century AD, as per historical records.

Many Indians credit the discovery of Takshashila to Bharata, the younger brother of Hindu deity Lord Rama. The ancient city has also been mentioned in the Ramayana, one of the two major Sanskrit epics of ancient India.