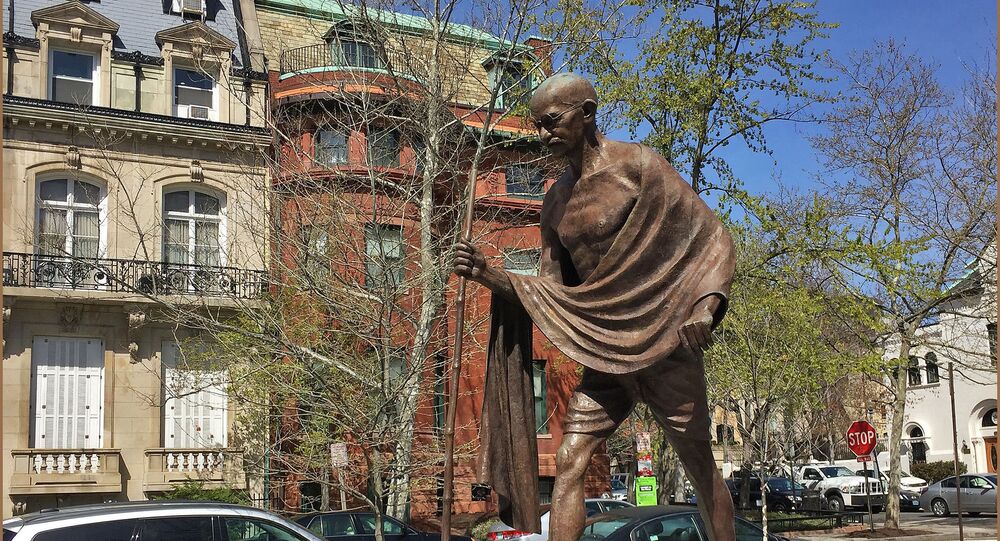 India witnesses one of its biggest protests by farmers which enters its 18th day today. Thousands of people have been agitating at the Delhi border against three agriculture-related laws passed by the Narendra Modi government in September, demanding the laws be repealed.

The wave of farmers’ protests against the Indian farm laws has spread to the US, where on Saturday, the statue of Mahatma Gandhi in Washington DC’s Mahatma Gandhi Memorial Plaza in front of the Indian embassy was defaced by Khalistani supporters (Sikh separatist movement).

In the videos that are doing the round on the internet, many pro-Khalistan Sikh youths can be seen raising anti-India and pro-Khalistan slogans.

Protesters jumped on the statue of Mahatma Gandhi and pasted the Khalistani flag over it and also hung a dummy of Prime Minister Narendra Modi's picture around it.

​A rally was carried to the Indian Embassy in downtown Washington, DC, which was attended by hundreds of Khalistani supporters who came out in support of the farmers protesting against the farm laws in India.

#WATCH | US: One of the organisers of the anti-farm laws protest at Washington DC, where Mahatma Gandhi’s statue was vandalised, replies to questions on the presence of pro-Khalistani elements at the protest & vandalism of the statue. pic.twitter.com/UMieXBuFXb

​Condemning the act, the officials of the Indian Embassy in Washington DC said in a media statement, “The Embassy has lodged a strong protest with US law enforcement agencies and has also taken up the matter with the US Department of State for an early investigation and action against the culprits under the applicable laws.”

The farmers, mainly from the agricultural states of Punjab and Haryana, have been protesting on the outskirts of Delhi. They are adamantly demanding a complete rollback of the three farm laws.

These include Farmers (Empowerment and Protection) Agreement of Price Assurance and Farm Services Act, 2020; Farmers Produce Trade and Commerce (Promotion and Facilitation) Act, 2020 and The Essential Commodities (Amendment) Act 2020.

They oppose what they see as a threat to the state's minimum support price (MSP) mechanism. The farmers are demanding that the government repeal the laws, as they don't contain a provision for retaining the MSP – the minimum price at which the state governments are obliged to procure produce from farmers.