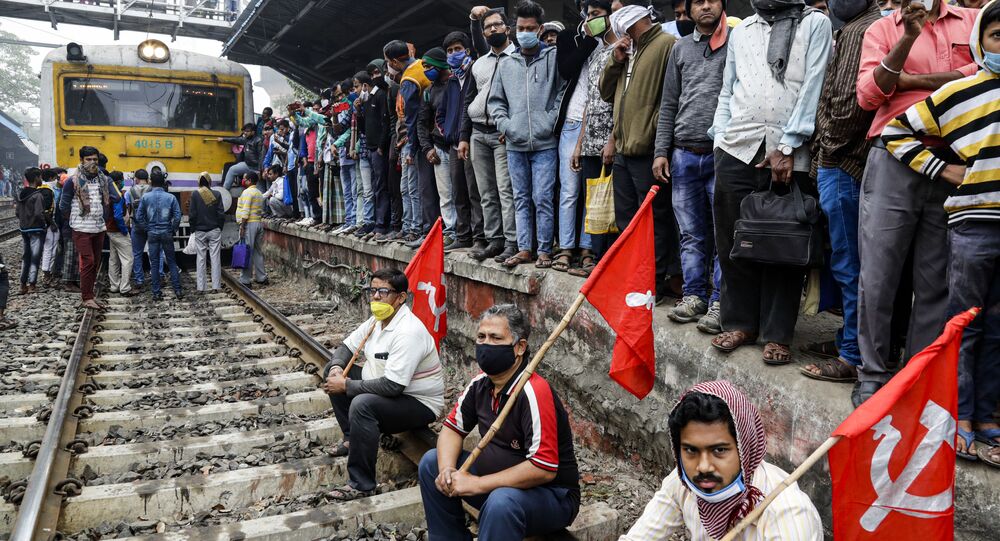 The Indian agriculture minister on Thursday stated that no law can be entirely defective. The government is ready to discuss the provisions that may adversely affect the farmers.

The protesting farmers, who are presently camping on the outskirts of India’s national capital, on Thursday threatened to block the railway tracks across the country if the Narendra Modi government didn't roll back the recently passed agriculture laws.

Speaking to the media in the evening, farmer union leaders reminded everyone that last month the country had witnessed Punjab state's railway tracks being blocked.

"We'd given an ultimatum till 10 December that if the Prime Minister doesn't listen to us and doesn't repeal the laws, we'll block railway tracks. It was decided in today's meeting that all the people of India will take to the tracks. We will fix a date and announce," Farmer leader Boota Singh said.

The Indian Railways had claimed losses of nearly $164 million in freight revenue with more than 2,225 goods trains suspended and 1,350 passenger trains cancelled and diverted last month.

"The Central government has admitted that the laws have been made for traders. If agriculture is a State subject, they do not have the right to make laws regarding it," Balbir Singh Rajewal, Bhartiya Kisan Union leader said.

He further mentioned that Prime Minister Narendra Modi had said that they were ready for talks and “we also agreed with the same. But the Agricultural Minister said that the talks would only continue if amendments are accepted.”

The farmers have been protesting on the outskirts of Delhi since 26 November to press for their demand of a complete rollback of the Farmers (Empowerment and Protection) Agreement of Price Assurance and Farm Services Act, 2020, the Farmers Produce Trade and Commerce (Promotion and Facilitation) Act, 2020, and The Essential Commodities (Amendment) Act, 2020.

According to the government, the laws allow farmers to sell their produce at places apart from their designated APMC market.

They also aim at allowing contract farming under which they can enter into supply agreements with private firms for remunerative and pre-decided prices.

Farmers, however, believe that the new laws would pave the way for the dismantling of the minimum support price system (MSP), leaving them at the mercy of big corporates.