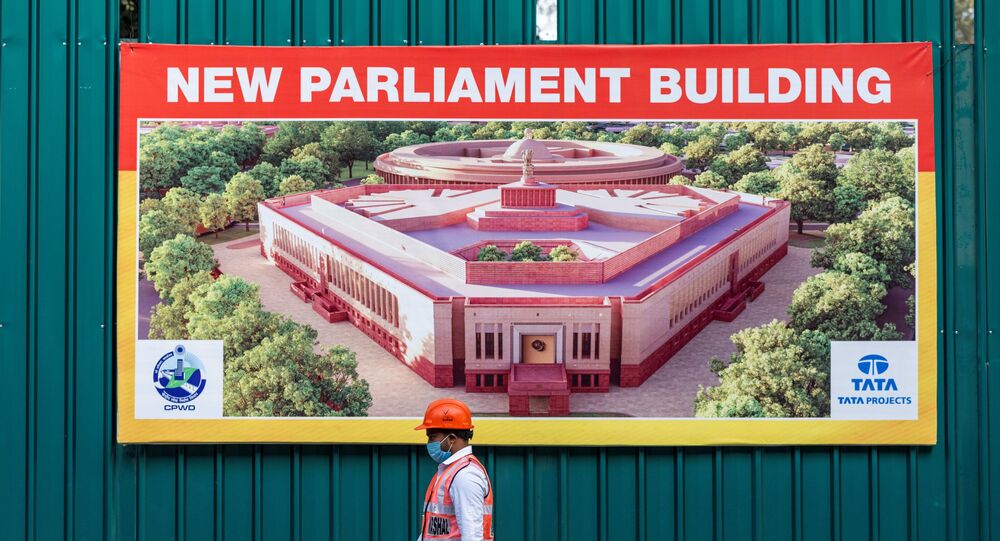 73 years after India won independence from Britain, the leaders of the country are moving in the direction of erasing the memories of the colonial era. In March 2020, the Indian government allocated $2.6 billion to “Indianise” the architecturally significant “Central Vista” region in Delhi, which includes the parliament building.

Laying the foundation stone of the new parliament building, Indian Prime Minister Narendra Modi on Thursday officially kickstarted the mega renovation project of the iconic Central Vista, or Rajpath area, located in the heart of Delhi. Along with the colonial-era existing parliament building, the area also includes the president’s residence, Rashtrapati Bhavan.

© AFP 2020 / RAVEENDRAN
Modi Government Gets Top Court’s Nod to Revamp British-Era Structures in Delhi
The region is also known as as "Lutyens", taking after the name of British architect Sir Edwin Lutyens who designed it for around $110,000 back in 1921-1927.

In a bid to add the touch of a developed and “self-reliant” India 73 years after gaining independence, the new parliament building will “showcase the cultural diversity of the country”, as Lok Sabha Speaker Om Birla told the media earlier, while talking about the project.

What Exactly is in the Making?

Back in September this year, one of India’s top construction firms – Tata Projects Limited – bagged the bid to build the new parliament house in central Delhi – close to the existing building and spanning over an area of 64,500 square metres.

Just like the present structure, the upcoming parliament building will also flaunt a grand Constitution Hall, a lounge for parliamentarians, a well-stocked library, along with several dining and committee rooms. The interiors of the new building will showcase the rich heritage of the country.,

A major noteworthy change in the new building will be larger chambers for India’s Lok Sabha and Rajya Sabha – keeping in line with late former Prime Minister Atal Bihari Vajpayee’s prediction that a growing democracy like India will require a growing number of representatives.

In the present building, the Lok Sabha has 543 seats and the Rajya Sabha has 245 seats only.

The new Parliament building in India is going to look like this. pic.twitter.com/j8Ll8WxJJX

New Parliament building:
Prime Minister Narendra Modi will lay the foundation stone on December 10 for a new Parliament building and the construction is expected to be completed by 2022 at an estimated cost of Rs 971 crore, Hopefully, in the 75th year of
of independence pic.twitter.com/7GsXMASOMV

​What Will Happen to the Lutyens-Designed Structure?

The monumental building, which is a gigantic circular establishment – 560 feet in diameter – will be turned into an archaeological asset of the country.

Lutyens’ creation, which boasts 12 grand gates, will also be used as an extension of the new parliament building and its rooms and halls will be used for events and meetings as per requirement.

Parliament building of the largest democracy of the world must be magnificent. PM @narendramodi ji inaugurated the lighting facility. Designed by Edwin Lutyens & Herbert Baker, it took six years to construct this magnificent Parliament building which was opened on 18 Jan 1927. pic.twitter.com/E2TVycJaPv

​The Public is Divided in Its Opinion

Ever since talks around re-developing Delhi’s fancy Central Vista region began last year, Indians have been divided over the idea of investing in something that does not need a revamp amid the current economic, social, and health crisis India is struggling to cope with.

In August, talking to Sputnik, history expert Mamta Chansoria said that even though a British architect designed it, the existing building was constructed brick-by-brick by hard-working Indians labourers only.

In recent months, several petitions also circulated on social media asking for signatures against pouring so much money into a new parliament building.

Petitions against the re-development of central vista in Delhi on https://t.co/y2bfk0rsSghttps://t.co/G4BSF5tnqJ pic.twitter.com/PJwTE4gXhv

​While several people have opposed the Modi government’s mega renovation project, many others have supported it.

Though I'm a fan of your visionary leadership since last 20 years, still it's a matter of proud that your good self is going to lay foundation stone of new Parliament house on my Birthday 🙏.@narendramodi @PMOIndia @BJPLive @AmitShah @myogiadityanath#NewParliamentBuilding

​In the presence of Cabinet ministers and ambassadors of foreign nations, PM Modi will lay down the foundation stone of the new parliament building today.

The construction of the building is expected to be completed by 2022.