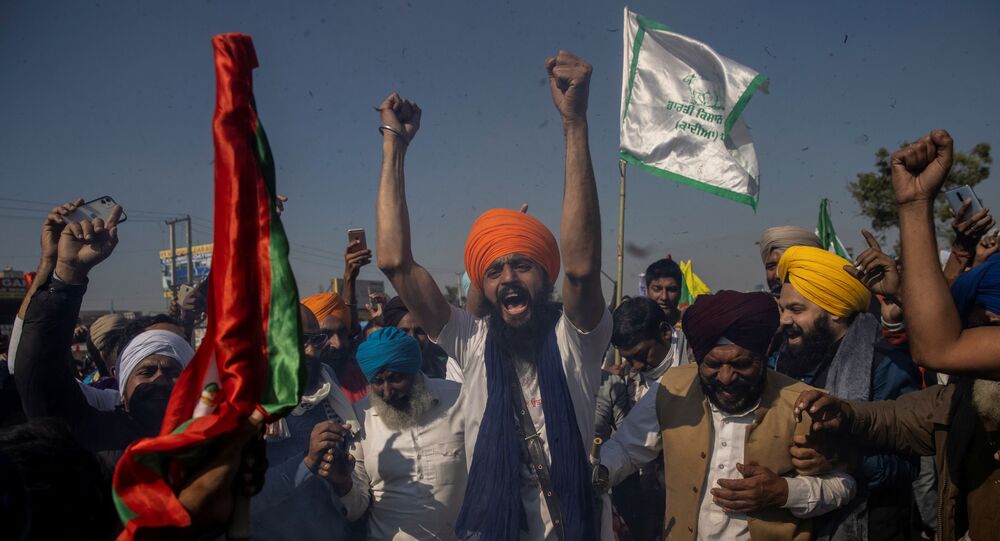 As India witnessed one of its biggest protests by farmers, who urged for a national shutdown "Bharat Bandh" today to demonstrate against three new farm laws, a section of Bollywood has also come out in support of their cause.

Giving a morale boost to farmers, several Indian celebrities have been expressing their support and have joined them in protesting against the new farm laws enacted in the country.

Calling farmers "India's Food Soldiers", Quantico star Priyanka Chopra Jonas, who has always been vocal about human rights, shared a post by singer-actor Diljit Dosanjh and wrote, "Their fears need to be allayed. Their hopes need to be met".

Our farmers are India's Food Soldiers. Their fears need to be allayed. Their hopes need to be met. As a thriving democracy, we must ensure that this crises is resolved sooner than later. https://t.co/PDOD0AIeFv

Looking at the farmers protesting in cold weather for the past few weeks on Delhi's borders, singer-actor Diljit Dosanjh, who joined the protest a few days ago at the Singhu border in Delhi, quietly donated INR 10 million ($135,800) to arrange for warm clothes for them.

Lending her support to the nation's farmers, Bollywood actress Richa Chadha in a tweet said, "India has been facing an agrarian crisis for the past two decades, 12,000 farmers commit suicide every year, that's over 30 per day! And yet, this is the biggest protest by people who put food on our plates".

She further commented, "Next time you shop for vegetables, don't wonder why the prices for vegetables are constantly rising. India is still an agrarian economy. It's not just a 'farmer’s issue'. Everything is connected".

Next time you shop for vegetables, (which u will soon irrespective of where u live or how much meat/fish u eat), don’t wonder why the prices for vegetables are constantly rising. India is still an agrarian economy. It’s not just a ‘farmer’s issue’. Everything is connected. https://t.co/8CAF9xcsIs

Bollywood actress Sonam Kapoor shared shocking visuals from the farmers' protest on Instagram with a famous quote by the late American lawyer Daniel Webster which read: "When tillage begins, other arts follow. The farmers, therefore, are the founders of human civilisation".

Worrying for the people protesting amid the COVID-19 pandemic, Bollywood actress Preity Zinta expressed hope that the talks between the farmers and Indian government would yield positive results soon.

My heart goes out 2the farmers & their families protesting in the cold in this pandemic.They are the soldiers of the soil that keep our country going.I sincerely hope the talks between the farmers & govt yield positive results soon & all is resolved. #Farmerprotests #Rabrakha 🙏 pic.twitter.com/b7eW8p8N3P

Actor Sonu Sood, who earned massive public admiration for helping a huge number of migrants during the national lockdown, too tweeted in Hindi to convey: "We exist because farmers exist".

I request all the #farmer brothers please keep calm and protest , I don’t want some one else do the mistake and then we face the repercussions as a class of farmers ... I’m sure #government will give us the solution.. but please sare shanti hi bana ke rakho ... sat sri Akal.. pic.twitter.com/q4b9ZQpXeW

No farmers = Barren land ! Our land is a Blessed one , so should be OUR Farmers’ lives !!!! Requesting the government to understand their issues and favour them ! 🙏🏻💛

If you eat today, thank a farmer.
I stand in solidarity with every farmer in our country. #JaiKisaan

India has failed to see the value of our Dear #Farmers 😔 Battling with the ones who put a meal on our plate is just very heartbreaking to see. They need to be given what they deserve, as they are the soul of our nation. 🇮🇳🧑🏽‍🌾#JaiJawaanJaiKisaan #Tractor2Twitter #ISupportFarmers

​Singer Gippy Grewal in his tweet criticised many big Bollywood actors for remaining silent on this burning issue.

Dear Bollywood,
Every now and then your movies have been shot in Punjab & everytime you have been welcomed with open heart. But today when Punjab needs u the most, u didn't show up and speak a word. #DISAPPOINTED #8_दिसंबर_भारत_बन्द#TakeBackFarmLaws#FarmersAreLifeline

Farmers, mainly from the agricultural states of Punjab and Haryana, are up in arms against new farm laws due to the exclusion of the state's minimum support price (MSP) mechanism. The farmers are demanding that the government repeal the laws, as they don't contain a provision for the MSP – the minimum price at which the state governments are obliged to procure produce from farmers.