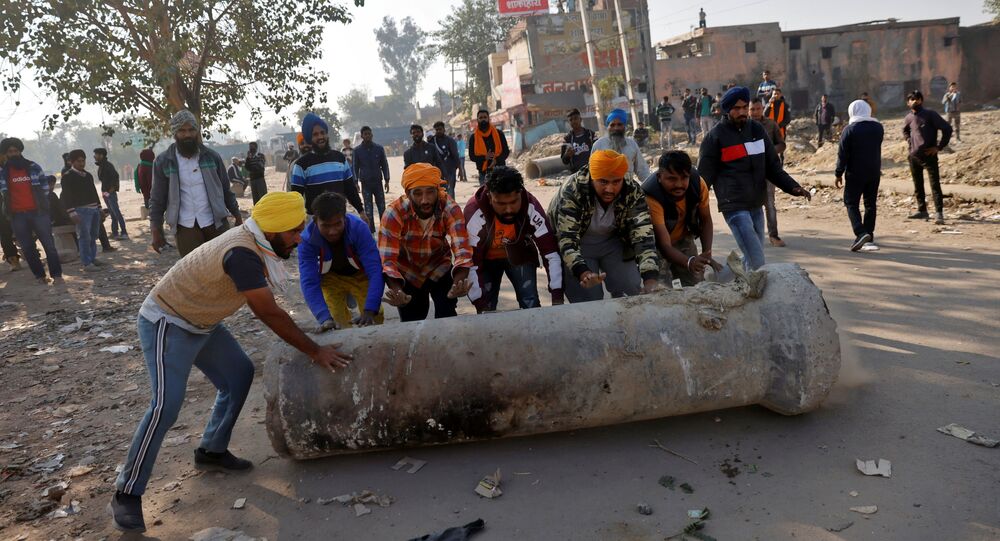 The ongoing protest at the Delhi state border has attracted support from major political parties as well as many members of the Muslim community. Several leaders from the governing Bharatiya Janata Party (BJP) say that the farmers' protest has been "hijacked by the anti-India lobby", in reference to critics of the new Citizenship Act.

Kapil Mishra, a Bharatiya Janata Party (BJP) leader who is accused of making a provocative speech in the lead-up to the Delhi riots, on Monday warned against any attempt to conjoin the movement against the new Citizenship Amendment Act (CAA) with the ongoing farmers' agitation.

"There are many people from the CAA movement who have joined the farmers. While we support the farmers, the people of Delhi won't tolerate these people in the farmer ranks," Mishra said in a video posted on Twitter.

Yadav is a psephologist-turned-political activist who is one of the leaders of the farmer movement in the ongoing protest. As per Delhi Police's probe into the sectarian riots in the Indian capital this year, Yadav had reportedly "instructed" students leaders to mobilise others for the CAA protests.

Kejriwal, on the other hand, made his way to the main protest site on Monday for the first time since it began.

"While we pray that the ongoing negotiations between the farmers and the federal authorities are able to find a breakthrough, we, the people of Delhi, won't tolerate protesters from Shaheen Bagh using the agitation as a platform to advance their own agenda," Mishra warned.

Mishra also called upon his supporters to "boycott" the call for a nationwide strike given by farmers on Tuesday, as he threatened that "people of Delhi" would snap the electricity lines of Delhi Chief Minister Kejriwal for backing Tuesday's shutdown.

At least 13 political parties, including the main opposition party Congress, Delhi's ruling Aam Aadmi Party (AAP) and several major regional parties from the southern and eastern parts of the country, have thrown their weight behind Tuesday's strike.

"We, in Delhi, would open our businesses. We won't accept the strike," Mishra has, however, stated.

Mishra's speech at a CAA protest in February this year has been slammed by opposition and civil society leaders for allegedly inciting anti-Muslim killings by Hindu mobs. The Delhi Police have, however, have not brought any charges against Mishra, citing a lack of evidence.

Groundswell of Support for Farmers

Many Muslim organisations, who have been opposing the CAA, have joined the ranks of agitating farmers at the Delhi state border, triggering criticism from BJP supporters who have alleged that the movement has been "hijacked" by the "anti-India lobby" (a derogatory reference to those opposing the CAA).

Octogenarian Bilkis Bano, one of the faces of the anti-CAA movement, last month also expressed solidarity with the protesting farmers. Bano won international fame and was even profiled by TIME Magazine for staging resistance against the Modi government's citizenship act.

​The Students' Islamic Organisation of India (SIO India), a student outfit backing Tuesday's strike call, told Sputnik that it would "stand shoulder to shoulder" with the farmers of the country despite facing objections from a section of BJP leaders.

"I call upon each and every citizen of the country to stand with the farmers", said SIO's General Secretary Syed Azharuddin.

So far, the farmer leaders and the government have sat down for three rounds of talks since the agitation began 12 days ago. The farmers have said that they won't cede any ground until the federal Agriculture Minister Narendra Singh Tomar agrees to withdraw the two-farm related ordinances, the Essential Commodities Act, 2020, and an electricity-related legislation.

Tomar, for his part, has assured farmers that they would be guaranteed a legal minimum support price (MSP) under the new system.