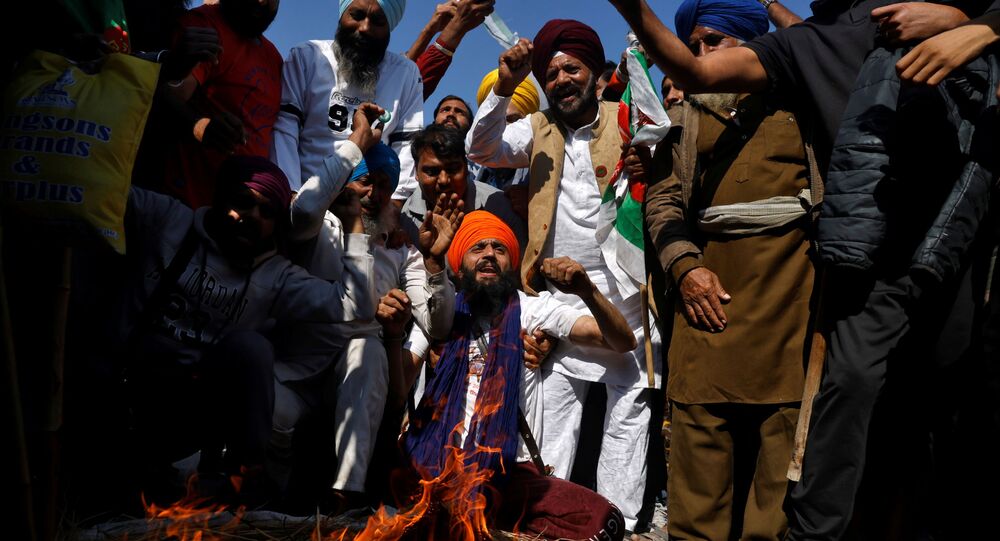 Indian capital Delhi is witnessing massive chaos amid the ongoing pandemic and raging protests from farmers opposing two new farm laws and one amendment. After over 10 days of protests in and around Delhi, the government and the farmers appear to be far from finding a common ground.

On Monday, Arvind Kejriwal, the Chief Minister of Delhi, is set to visit the agitating farmers at the Singhu border of the Indian capital to check the arrangements put in place for the protesters. These farmers have marched to Delhi from several Indian agricultural states including Punab, Haryana, Madhya Pradesh, Uttar Pradesh and Uttarakhand.

© REUTERS / DANISH SIDDIQUI
Thousands of Protesting Indian Farmers Gather on Delhi's Outskirts, Riots Feared
Demanding an emergency meeting of the parliament to revoke the amendment and additions to farm laws passed in September, the farmers are calling for a day of 'non-cooperative movement', Bharat Bandh (India Shut), on 8 December.

Farmers have decided to occupy toll plazas around Delhi and across the country if the laws are not pulled back by Prime Minister Narendra Modi's Bharatiya Janata Party (BJP) government, that has advocated the new legislation as “progressive” and in favour of the farmers.

Meanwhile, traffic comes to a grinding halt at the DND, crazy jam! This, primarily because of several layers of barricading by Delhi Police along the highway.

Wonder why Delhi Police has to make people crawl on a Monday morning when farmers are not even here on DND. pic.twitter.com/amwNV77pa4

​Videos of Indians living in other countries including the UK, the US, Canada and Australia, who have come out in support of the farmers have also emerged on Twitter as the movement seems to be gathering a momentum globally.

Wow what a powerful protest and message of solidarity by the UK sikh sangat for the #FarmersProtest outside the Indian Embassy in London! Bolle Soun Nihal! Sat Sri AkkkaaaaL#कल_भारत_बंद_रहेगा#कल_किसानों_का_भारतबंद_रहेगा#8दिसंबर_भारत_बंद

The three laws that sparked the controversy are -- The Farmers’ Produce Trade and Commerce (Promotion and Facilitation) Act, 2020, the Farmers (Empowerment and Protection) Agreement on Price Assurance and Farm Services Act, 2020 and the Essential Commodities (Amendment) Act 2020.

The farmers fear that with these new laws, the BJP government is backing out from its role as a price guarantor for their produce while leaving their earnings to be influenced by market forces.