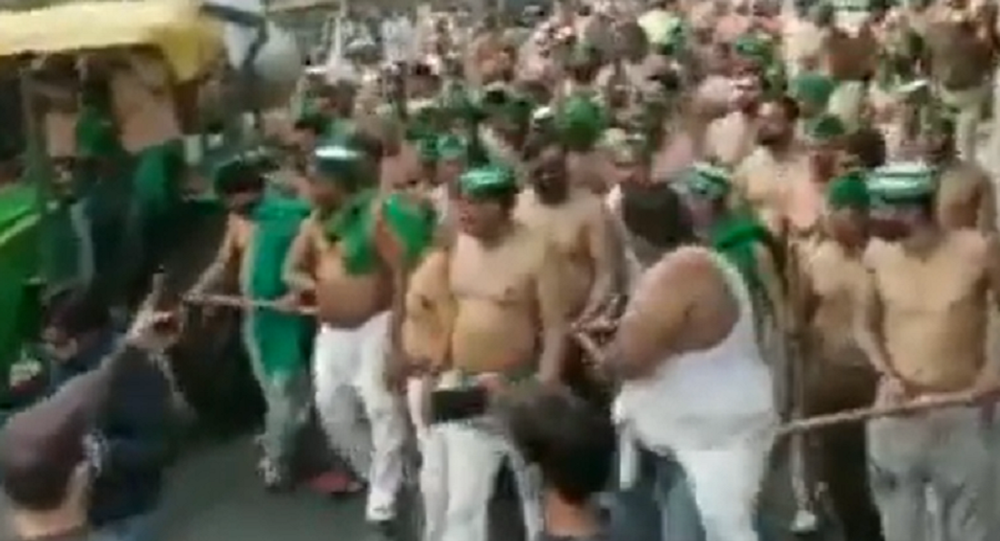 Protests against the federal farm laws at the state borders of India's capital Delhi entered their 11th day on Saturday. Three rounds of talks between the federal government and the farming leaders last week have failed to lead to a breakthrough, prompting protesters to issue the call for a nationwide strike on Tuesday.

A farmers' outfit on Saturday organised a shirtless protest march against the new federal farm laws, with scores of protesters making their way to the Delhi border from neighbouring Uttar Pradesh state.

​"We won't turn back till the new farm laws are rescinded. We will only relent if the federal government takes back its laws," the protesters told news agency Asian News International (ANI).

The protesters came from Bharatiya Kisan Union (Lokshakti), which is among dozens of farmer organisations demanding the new farm laws be rolled back.

The protests against the farm laws entered their 11th day on Saturday, with the farming organisations calling for a nationwide strike on Tuesday should the federal government refuse to budge.

Harwinder Singh Lakhwal from the Bharatiya Kisan Union (BKU), one of the main outfits leading the agitation, has threatened that farmers would block the major highways and toll plazas during Tuesday's strike if their demands weren't met.

A third meeting between the protesting farmers and the government delegates, led by federal agriculture minister Narendra Singh Tomar, on Saturday failed to find a breakthrough.

Federal minister Narendra Singh Tomar said after the meeting that the government would continue to guarantee a minimum support price (MSP) for farmers, going on to ask them to tone down the protests by sending back the elderly and women protesters.

Farmers are complaining that the two new farming laws, Farmers Produce Trade and Commerce (Promotion and Facilitation) Act, 2020 and The Farmers (Empowerment and Protection) Agreement on Price Assurance and Farm Services Act, 2020, could deprive them of a say while conducting business with private players. Among other provisions, the new laws call for abolition of government-regulated wholesale markets.

The protesters are also worried that another new law, Essential Commodities Act, 2020, favours the corporates by removing certain agricultural products from the protection of 'essential items' under Indian law. Another electricity-related legislation passed recently could deprive farmers of subsidised electricity, the protesters have alleged.