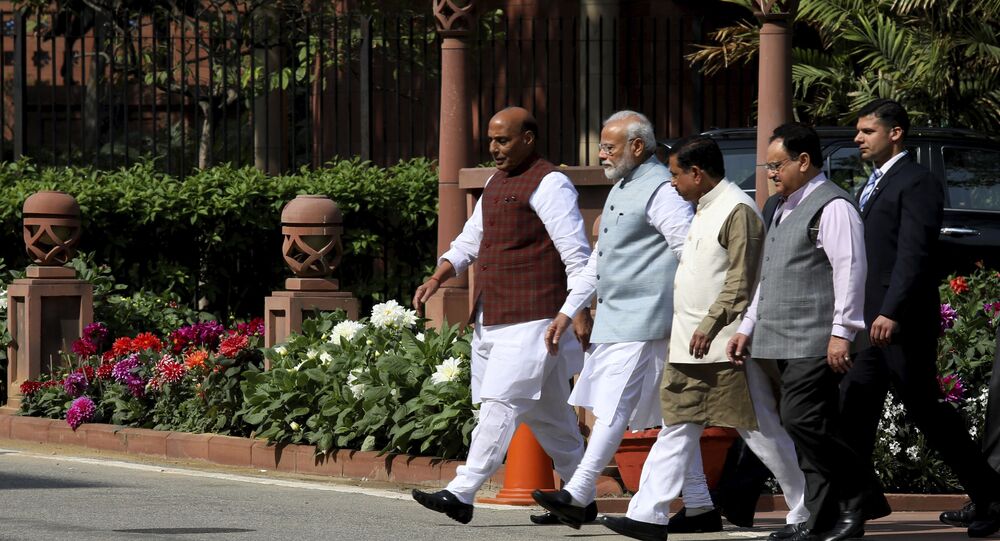 India Ready to Work With Any US President But Won't Tolerate Policy Being Dictated, Analyst Says

A change of the US administration in the White House will not affect India's insistence upon its foreign and domestic policy remaining independent of outside influence, says Amrita Dhillon, a foreign affairs analyst and founding editor of The Kootneeti magazine, who stresses that New Delhi is ready to work with any duly elected president.

Over the past four years, the Trump administration has placed an emphasis on India's role in Washington's foreign affairs. The South Asian giant was matched by the US against China, which came under substantial pressure from the White House during Donald Trump's tenure.

Should Joe Biden win, India will have to work much harder to get Washington’s attention, as he will place emphasis on relations with the EU, East Asia and climate change issues, noted Kanti Bajpai, director at the Singapore-based Centre on Asia and Globalisation (CAG) in an op-ed for The Times of India. For its part, a Washington DC-headquartered magazine, The Diplomat, alleges that the potential Biden administration "may spend four-fifths of its time on domestic issues as opposed to foreign policy", given the COVID pandemic, the turbulent economy, and deep political polarisation in the US.

Harris and Blinken May be a Good Sign for India

Regardless of who sits in the Oval Office, New Delhi will support the people of the United States in who they elect, says Amrita Dhillon, an Indian foreign affairs analyst and founding editor of The Kootneeti, a New Delhi-based publication.

"The Trump administration has brought India and the US much closer over time," she says. "New Delhi understands this; the people-to-people contact has also grown over years and this will help retain the strong bond between two nations. President Trump's personal bonhomie with PM Modi has been remarkable, in fact, one of the best in the history of India-US relations."

However, Dhillon expects that Kamala Harris, should she be confirmed as the next US vice president, may prop up Modi-Biden relations to a new level due to her Indian-Jamaican origin. At the same time, the foreign affairs analyst believes that the ex-vice president's decision to pick Anthony Blinken as a would-be secretary of state is also a good sign for India.

"New Delhi believes that Blinken would prioritise the US relations with India," she says. "Prime Minister Narendra Modi was the twelfth in the list of priority given by Biden in his phone calls to global leaders, which is even prior to the US’ Middle East allies, like Saudi Arabia, or the EU and NATO."

Biden May Loosen the US Grip on China

While the potential Biden administration's strategy towards China, India's neighbour and competitor, is not clear yet, Dhillon believes that the former vice president will take a softer stance on the People's Republic than his predecessor.

"The world has seen Joe Biden as the vice president of the United States, thus in my belief, Biden will try to take US foreign policies back to the Obama days," she says. "He has already hinted at this. 'America First' will no longer be the goal of the US foreign policy. The Iran Nuclear Deal may be restored by the Biden administration. This will include going soft on China. The Biden-Harris administration will likely try to reinstate the traditional diplomacy model which was followed by the Obama administration."

She believes that this new circumstance may encourage the People's Republic to take a more assertive stance towards its neighbours, including India. The Sino-Indian border dispute which erupted in May continues to simmer. The standoff along the Line of Actual Control (LAC) started on 5 May in the Himalayas and turned deadly in mid-June, with at least 20 Indian troops being killed in Galwan Valley. China did not report its casualties.

Indian Minister of External Affairs Subrahmanyam Jaishankar has warned that the border talks with China could last years in his latest interview with The Hindu. He highlighted that the issue remains very complicated and that he intends to get to the bottom of it. "I will not be stampeded into accepting something which is less," the Minister remarked.

"The US loosening its grip on China certainly will give more power to Beijing and this may increase the rift between India and China," Dhillon opines. "There are no possibilities of New Delhi kneeling in front of Beijing."

© REUTERS / DANISH SIDDIQUI
Farmers shout slogans after burning an effigy during a protest against the newly passed farm bills at Singhu border near Delhi, India, November 28, 2020

Although Modi and Jaishankar have done a remarkably successful job on the foreign policy front, despite odds with the neighbours, they are facing a lot of challenges at home, according to the Indian analyst.

"On the domestic front there are more complex challenges, like the ongoing farmer agitation in North India," she says. "This gives more reasons to opposition and regional parties to criticise and mount pressure on the government."

Tens of thousands of farmers from Punjab, Haryana and Uttar Pradesh are protesting over three market-friendly laws passed in September by the Modi government. The reforms were ostensibly intended to give farmers more autonomy to set their own prices and sell directly to private businesses.  The Indian authorities have in the past offered minimum price guarantees for certain crops, which shields farmers from market uncertainties and allows them to invest in the next crop cycle. The new liberalisation laws have prompted India's agricultural workers to fear that corporations may take advantage of them.

Al-Jazeera alleged in mid-November that the Biden administration may raise human rights issues with regard to Modi’s Citizenship Amendment Act or his 2019 move to strip Jammu and Kashmir of its special status and statehood. India passed a constitutional amendment splitting the restive state into two union territories in August 2019.

At the same time, ex-President Barack Obama's book "A Promised Land" that hit the shelves on 17 November, highly praised former PM Manmohan Singh and ex-President of Congress Party Sonia Gandhi, who belong to today's opposition forces. Obama cited Manmohan Singh, who had voiced concerns about the "nationalist Hindu" Bharatiya Janata Party's rise, and drew parallels with the emergence of the conservative Tea Party movement in the US. One might ask whether Biden's ascendance to power will reinvigorate the Indian opposition and create further pressure on New Delhi.

"The world has changed after the pandemic outbreak and New Delhi will not let the new US administration dictate its will on India", underscores Dhillon. "President Trump has changed the geopolitics globally, he has changed the entire course of the Middle East. The world is more multipolar than it was ever".

"As far as President Obama's book is concerned, PM Manmohan Singh was no doubt an economic genius, however, his comments on BJP seems his personal opinion," she remarks. "Gandhi was India's soul, then and now, and will remain there."