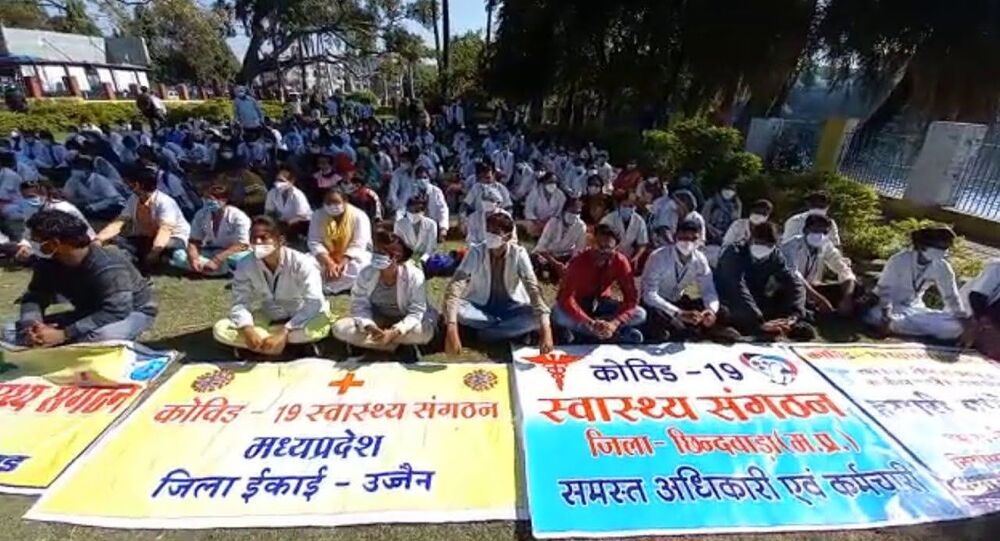 The surge in COVID-19 cases in India has put enormous pressure on the healthcare infrastructure as well as doctors and support staff. As India battles one of its worst economic phases due to the COVID-induced lockdown, the effects of the downturn have also been felt by medical and paramedical professionals.

"This is shameful on the part of the BJP. Why? Just because these frontline COVID warriors are demanding their rights", Gandhi said in a tweet in Hindi, citing a video of the crackdown.

​Giving background to the ongoing strike by medical support staff in Bhopal, the president of the Indian Medical Association (Madhya Pradesh unit) told Sputnik that the paramedical workers had been demanding "compensation" for the families of two of their deceased colleagues who contracted COVID-19 while serving in the hospital.

"There is nothing wrong in demanding compensation. The police's actions were very high-handed", remarked Dr Nigam, adding that at least a dozen of the on duty support staff have succumbed to COVID-19 in the last few months.

He also highlighted that support staff had been working in "extremely stressful" conditions, which include long working hours and temporary contracts.

"The state government has an obligation to heed their demands. As it is, they were enrolled temporarily to support us doctors after COVID struck", said Dr Nigam.

The police crackdown follows threats by the paramedical workers that they would march to the residence of State Chief Shivraj Singh Chouhan if their demands weren't fulfilled.

Madhya Pradesh has a BJP government.

Protests by doctors and support staff have also been witnessed in other Indian cities, with a delay in the payment of salaries, lack of proper COVID-protective gear, and demand for adequate compensation being among the major complaints.

Meanwhile, Prime Minister Narendra Modi has hailed the contribution of medical and support staff in the nation's "fight" against the COVID pandemic.

Modi also chaired a meeting of political parties in the country to apprise them about the progress made on the development of a COVID vaccine.

"It seems that we won't have to wait much for the new COVID vaccine. It could be with us in the next few weeks", the PM stated towards the conclusion of the meeting.

"The federal government is closely in touch with the different state government to decide who will be inoculated with the new vaccine on priority", he stated, adding that "frontline health workers such as doctors" would be among the first recipients of the new COVID jab.

With more than 9.5 million COVID infections recorded, India has the second worst caseload in the world after the US. More than 36,000 new cases were reported from across the country on Friday, as per an update from the federal Health Ministry.