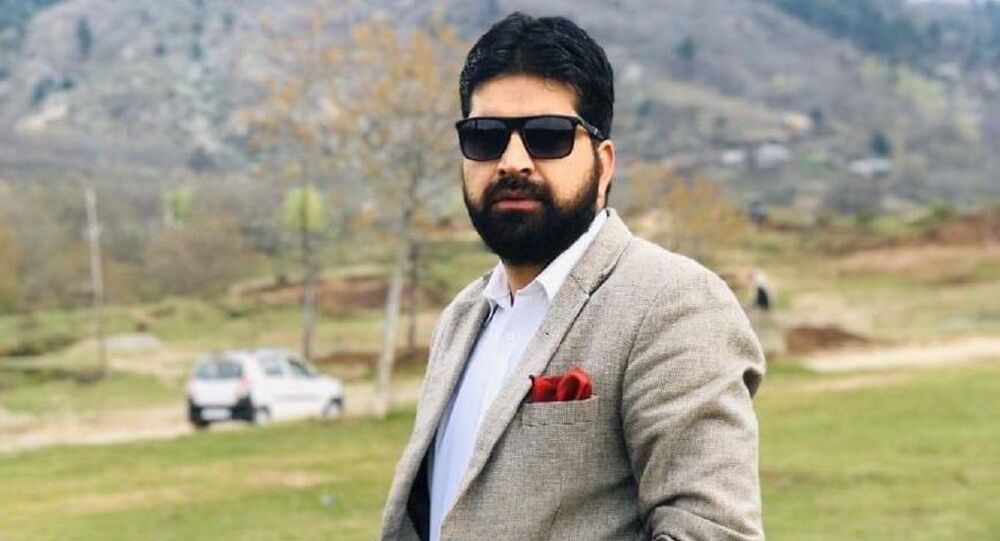 In a first since losing its special status in August 2019, Jammu and Kashmir last week kicked off the District Development Council (DDC) elections. The elections, which are supposed to conclude after eight phases of polling, entered their third phase on Friday. Penetrating the heavy security deployments around booths, a terror attack created havoc.

Anees-ul-Islam, a candidate from Jammu and Kashmir's “Apni Party” contesting in the DDC elections was shot in the hand by unknown gunmen in a bid to disturb the polling process that had been going smoothly before the incident.

© Photo : Nighat Abbas/ Twitter
India’s Jammu and Kashmir Sees First Local Elections Since Losing Statehood and Autonomy Last Year
Anees was attacked in the Sagam area of Anantnag in South Kashmir after which he sustained injuries and was shifted to a local hospital.

Indian journalist Aditya Raj Kaul – who is a Kashmiri Pandit by birth and is currently working independently – shared a picture of Anees getting treated by doctors in the hospital, confirming the attack.

Photograph of Anees after being shot by terrorists in Anantnag of South Kashmir. He is safe. Shot in the hand. He is a DDC candidate of Apni Party from the area. https://t.co/YAqWW1TMxd pic.twitter.com/e6jWlRlICP

​While more details about the forces responsible for the attack are awaited, the news has created a major buzz on social media.

Netizens, especially from Jammu and Kashmir, have blamed Pakistan for trying to disrupt peace in the valley.

This shows their desperation to hinder growing grassroot development in Kashmir. pic.twitter.com/F2sn8qilGr

DDC candidate, Anees-ul-Islam, shot at by #terrorists in #Anantnag

This is what #Pakistan was trying from a long time to disturb & create panic among locals to hinder #DDCElections.

Pak is frustrated by seeing huge positive response to DDC polls from people of #Kashmir pic.twitter.com/jLHbxiS88s

​The attack by unknown gunmen comes just hours after videos of Jammu and Kashmir residents dancing and celebrating their votes in the DDC elections surfaced online.

“This is first time in over 70 yrs that we're voting in local body polls. We're happy to participate in democratic process,” says a voter. pic.twitter.com/Rhz4Tsn7Z4

​Up to 2,644 polling stations have been established across Jammu and Kashmir amid a heavy security deployment and COVID-19-preventing measures put in place.

A total of 43 constituencies will be participating in polling today - 25 in Kashmir and 18 in Jammu. There are 280 DDC seats in the region - 140 each in Jammu and Kashmir.

© AP Photo / Dar Yasin
Modi Government Eyes 'Modern' Makeover for Jammu & Kashmir One Year After Change of Special Status
Article 370, before abrogation, had allowed the state's legislature to make its own laws. It also banned people from outside the state from purchasing property and getting state government positions.

The scenic valley has been a bone of contention between India and Pakistan, with two wars having been fought over Kashmir since India gained independence from British rule in 1947.

In recent months, news about terror activities ramping up in the region have often made it to the headlines. For instance, on 3 December, a video of Indian soldiers uncovering a secret passageway entering into Indian territory surfaced online, raising suspicion about Pakistan-backed infiltration activities.

Does Pakistan has any limit of shame? Relentlessly dedicated to infiltrate India through different means, What else techniques do they use? @RDXThinksThat @dpkpillay12 @reachind_uk @arifaajakia @vivekagnihotri pic.twitter.com/5J9VANwg6g