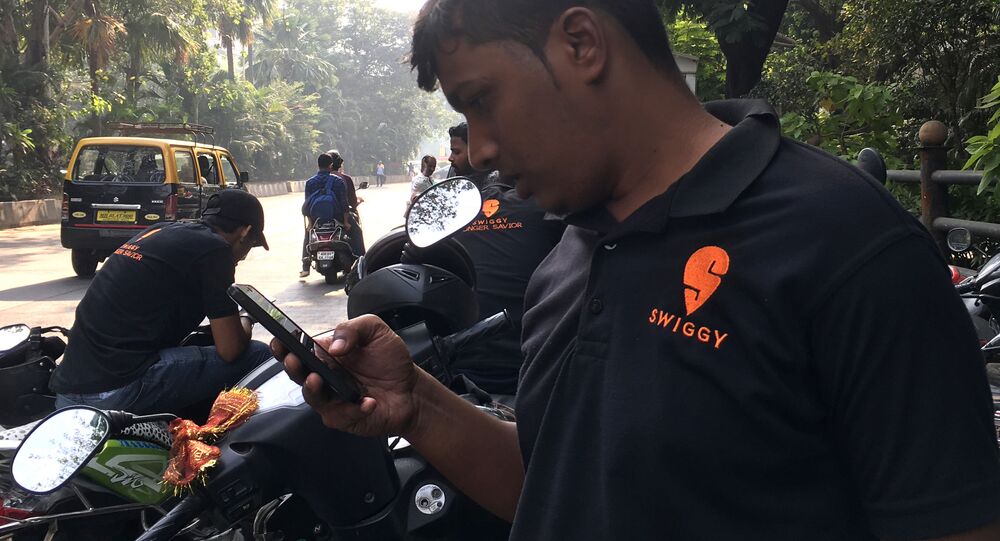 Indian Prime Minister Narendra Modi’s government passed two farm laws and an amendment in the Essential Commodities Act in September that have stirred indignation among India’s farmers. Currently, thousands of farmers are in Delhi, with many blocking the capital’s borders as a sign of protest against the newly passed laws.

The farmers protesting in and around Delhi are currently India's biggest news, also leading to vivid discussions on social media: while some netizens are supporting the Prime Minister Narendra Modi-backed new farmer laws, others are siding with the protesters, who are concerned that the legislation will affect them in a negative way.

© AFP 2021 / NARINDER NANU
'No Probe, Huh?': Swiggy, Zomato in Hot Water Over 'Stale Food' Deliveries Amid Pandemic
Indian online food ordering app Swiggy has found itself at the epicentre of a Twitter controversy after it showed inclination towards the farmers in what many viewed as a jab at the government while replying to a comment on the micro-blogging site.

A Twitter user tagged Swiggy in a post revealing that one of her pro-Modi friends, while defending the government, said that “We are not dependent on farmers for food. We can always order from Swiggy".

Replying to the user, the official handle of the food ordering app said, “Sorry, we can’t refund education”.

​Swiggy’s sassy reply drew the attention of thousands of netizens who joined in the fun.

While some appreciated Swiggy’s stance, others threatened that they would uninstall the app after its “shameful comment” against the government and shift to Swiggy’s rival app Zomato to order food online.

The hashtags #Swiggy, #Zomato, and #Bhakts have been trending on Twitter in India. The Hindi word “Bhakt” is used for “devotees” of the Modi government.

Understand the sarcasm, I know it's a savage response. But, damn it was a good reply!! #swiggy https://t.co/NA0rikSqj8

This is shameful act from such a reputed food delivery app 𝗦𝘄𝗶𝗴𝗴𝘆 by portraying their politics by insulting a group of people. Whatever be the reason behind this tweet, how could they can tweet their shameful comment?#swiggy #uninstallswiggy https://t.co/5M8xz0F1pH

​Several thousand farmers from India's agricultural states of Punjab, Haryana, Uttarakhand, Uttar Pradesh, and Madhya Pradesh have been flocking in and around Delhi to protest the laws and amendment since last week.

The farmers have accused the Modi government of backing out from its role as a price guarantor and allowing produce pricing to be influenced by market forces.