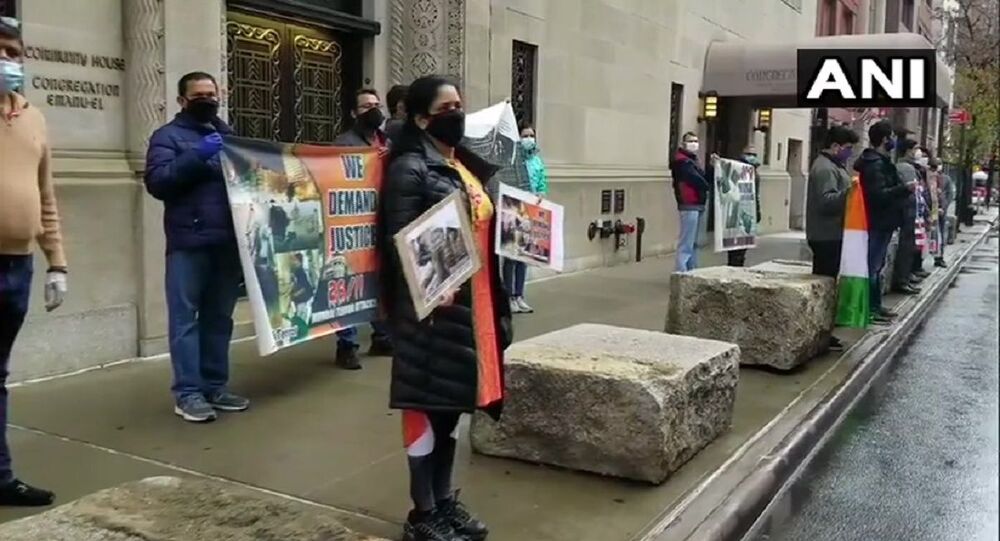 India's financial capital Mumbai witnessed a terrorist attack on 26 November 2008, which is considered one of the deadliest terror attacks in the country’s history. At least 174 people were killed, including 9 terrorists, while over 300 were injured.

To commemorate the murder of over 165 people, including police personnel who lost their lives in the 2008 Mumbai terror attack, members of the Indian-American diaspora community took to streets in the US, protesting outside the Pakistan consulate and on Times Square in New York against Pakistan's role in the deadly attack.

On the 12th anniversary of the attack, protesters called for an end to state-sponsored terrorism by Pakistan.

Videos of the protests show demonstrators carrying banners reading 'Stop Pak Terrorism' and 'We Demand Justice'. The protesters also rolled out a mobile banner outside the two protest sites. They could be seen holding the flags of India and the USA.

Speaking to the Indian News Agency ANI, a protester said that they are holding a peaceful protest outside the Pakistani consulate.

"None of the culprits are being punished by law. In Pakistan, these terrorists are still hiding. We want to draw the attention of the Biden administration to take appropriate action against the terrorism around the world," the unnamed protestor said.

While the official results of the November 3 Presidential election in the United States have not yet been announced, all major US media outlets have called the race for Democrat Joe Biden.

Many American and Israeli lives were lost during the 2008 Mumbai attack, and culprits and terrorists hiding in Pakistan should be punished, the protestor added.

Another protestor, Ankush Bhandari, said the terrorism is being spread by Pakistan throughout the world.

"Any terrorist attack in the world - whether it is in New Zealand, India, Sri Lanka - the roots go back to Pakistan," Bhandari said, adding "we urge the Pakistani community to stand up against the jihadists and then the solution can come."

Protestors also urged the United Nations to take concrete steps against Pakistan and place it on the blacklist of the FATF, the international body tasked with curbing money laundering and the financing of terrorism, so that terrorism could be eliminated at its roots.

On 26 November 2008, a group of 10 terrorists associated with the Pakistan-based terrorist organisation Lashkar-e-Taiba (LeT) carried out a series of coordinated attacks at multiple locations, claiming the lives of over 165 people.

Nine of the terrorists were gunned down during the attacks; one was captured alive and was later hanged to death in India on 21 November, 2012.