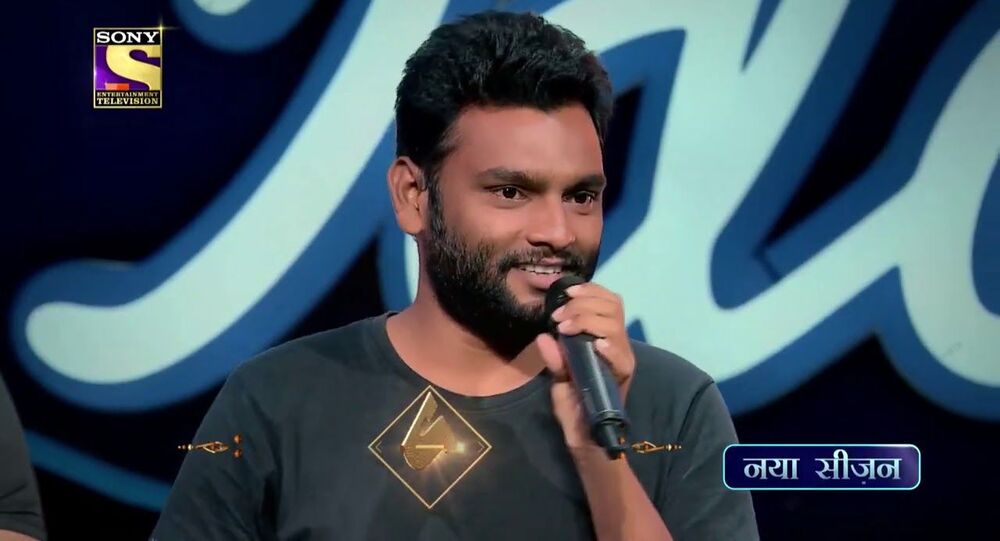 India's biggest singing reality show, Indian Idol, is back with season 12. Ahead of its premiere on 28 November on the Sony Entertainment Television channel and Sony LIV OTT platform, a sneak peek of its contestants leaving judges blown away by their talent is creating a lot of buzz on social media.

26-year-old contestant of Indian Idol 12 Yuvraj Medhe from India’s Maharashtra state not only impressed the judges with his talent, but touched everyone's heart, making them emotional with his inspiring journey in the singing reality show.

In the promo for the upcoming episode, released online, Yuvraj can be seen giving an audition at the Indian Idol set where he had been working as a sweeper.

"I have been working on the set of Indian Idol for the past three to four years. I did sweeping and helped in setting up the place", he told the Indian news agency IANS.

The singing show has Neha Kakkar, Himesh Reshammiya, and Vishal Dadlani as judges.

"Indian Idol" judge singer Vishal Dadlani shared this video on social media and wrote, "Yuvraj is indisputable proof that everyone associated with Indian Idol is in the right place & doing something truly good".

Anyone can say anything they like about #IndianIdol12 and us, but people like Yuvraj Medhe and his dedication and talent are far bigger truths.
Yuvraj is indisputable proof that everyone associated with Indian Idol is in the right place & doing something truly good. 🙏🏽🙏🏽🙏🏽 https://t.co/0X7OJYuoHH

Leaving the judges awestruck by his background story and performance, Yuvraj, a son of a labourer, said in the video: "Whenever judges used to give their review to other contestants' singing, I would closely observe them. That's how I learnt about singing all these years".

Since childhood, Yuvraj has been passionate about singing, but he didn't have the courage to make it to the stage. Now that he has received this golden opportunity, it will be interesting to see how he makes the most of it.

"I didn't have the confidence to participate in the show earlier and showcase my talent. I used to make my friends listen to my songs. They would like my voice and they encouraged me to participate”, he said while referring to the previous season's winner Sunny Hindustani who used to polish shoes in Punjab state.

“They said 'if a shoe shiner can come here and win, then you can do it too'", Yuvraj added.

Meanwhile, from cleaning the stage of Indian Idol to performing on the same stage as a contestant, Yuvraj has come a long way and has already made netizens his fans.

that's called being passionate about music... wishing him all the very best🤩 https://t.co/XbCyojKpBZ

Everything is possible, just you need to start https://t.co/AVTTZjc91h

'To Get to Your Goal, You Have to Have Your Heart in It': Britain's Got Talent Star Souparnika Nair