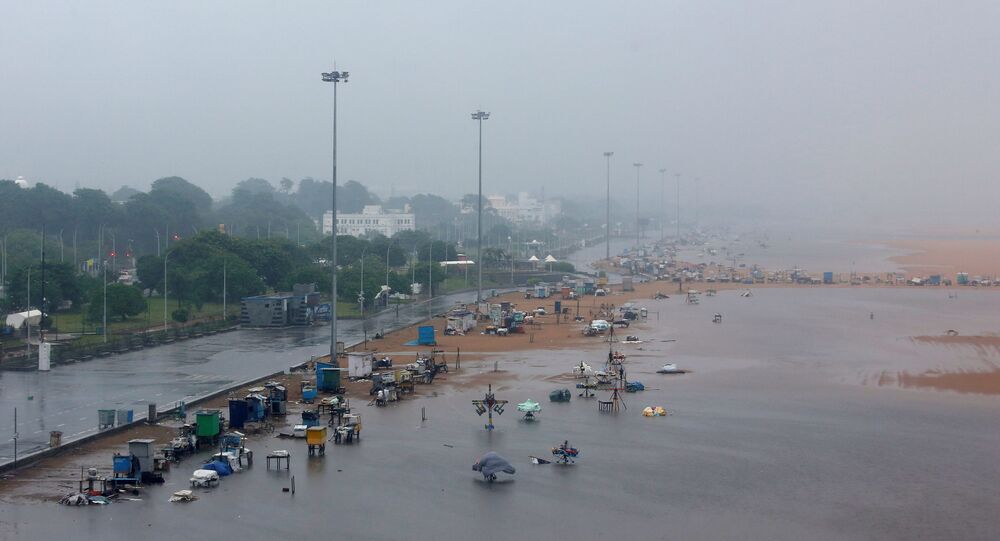 Amid very severe cyclonic storms followed by heavy rains, the authorities in the southern Indian state of Tamil Nadu and union territory Puducherry are still assessing the damage situation caused by cyclone Nivar. Formed from an intense depression in the Bay of Bengal, Nivar made landfall, uprooting trees in the region after midnight on Thursday.

The cyclone, that has now weakened into storms, first made landfall near the coastal Tamil Nadu town of Marakkanam - 30 kilometres north of Puducherry at around 2:30 a.m. More than 200,000 residents from this area were earlier evacuated to safer regions to avoid loss of life.

© Photo : The common voice/twitter
Year of Calamities? Cyclone Nivar Looms Over India's Tamil Nadu as Heavy Rains Lash Chennai
Major cities in southern India, including Chennai and Bengaluru, have been witnessing almost continuous downpours from dark clouds hovering over the area. Considering the situation, the authorities in the states declared a public holiday on Thursday, while at the same time urging people to stay indoors.

Residents of the cyclone-hit regions have been relentlessly sharing updates on Nivar on social media along with bone-chilling videos of the situation. Bodies of water in the area have been overflowing due to the strong cyclonic storms.

© REUTERS / Anuwar Hazarika
Bursting Clouds, Lightning & Floods Wreak Havoc on Indian States Leading to Destruction, Deaths
​Although details on the extent of the upheaval and damage caused by Nivar remain unclear, CCTV footage showing a tree falling on a pedestrian has testified to the dangerous circumstances that the southern Indian states are currently battling.

WARNING: The following footage is disturbing and may offend sensibilities

Disturbing visual from Triplicane, #Chennai: #CCTV footage of tree falling on a 50-year-old man, who was getting back home from a tea shop. #CycloneNivar pic.twitter.com/6OKeP6qohF

​Snippets of an Indian Coast Guard vessel deployed off the coast of Chennai – the densely populated capital of Tamil Nadu have also made it to Twitter.

​Some areas in the region are currently waterlogged, causing additional inconvenience to people in urgent situations.

​At present, the cyclonic winds are blowing at a speed of 90-100 kilometres per hour (kmph), occasionally reaching a 110 kmph velocity.

In the next three hours, Nivar is projected to move northwest and further weaken into a cyclonic storm, according to the Indian Meteorological Department (IMD).

IMD has predicted landfall point of Cyclone "NIVAR" b/w Karaikal and Mamallapuram close to Puducherry in its 1st track forecast at 0530 IST of 23th Nov, i.e. 3 days in advance.