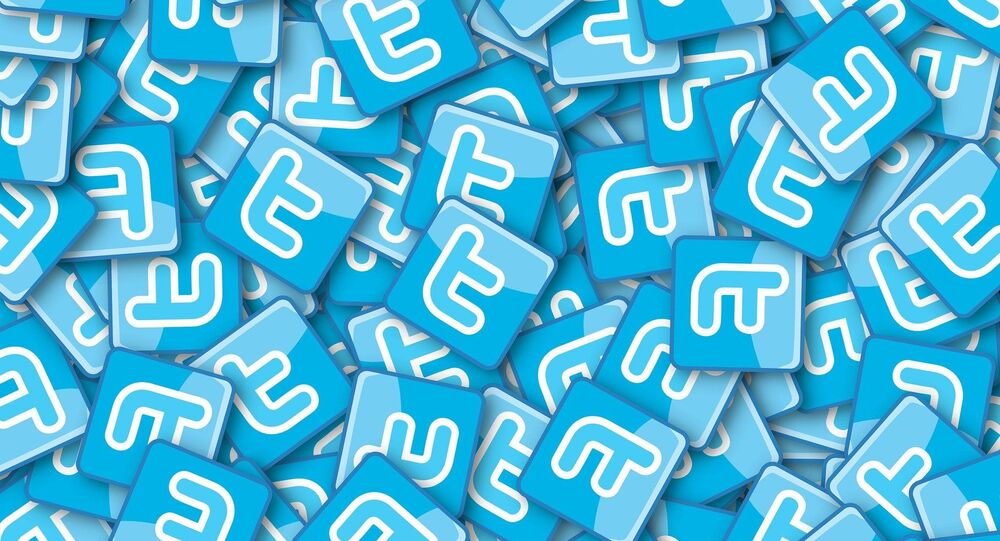 The US social media giant has been accused of curbing the freedom of expression of True Indology, a social media account known for propagating views about Hindu culture and popular among many supporters of India's governing Bharatiya Janata Party (BJP).

An activist in the Indian state of Madhya Pradesh has called for legal action against Twitter India's Managing Director Manish Maheshwari over the "arbitrary" suspension of an account popular for propagating views about Hindu culture and traditions.

According to the complaint filed by Shrikant Sharma, Twitter India curbed the freedom of expression of True Indology.

The complaint, which has been received by the Vidisha Police Station, demanded action against Twitter India under sections 295A (deliberate act intended to outrage religious feelings), 500 (defamation), 505 (inciting a community), and 506 (criminal intimidation) of the Indian Penal Code.

The contents of the complaint filed by Madhya Pradesh-based activist Shreekant Sharma against @TwitterIndia MD @manishm for suspending the account of #TrueIndology demand a probe under Section 295A, 500, 505 and 506 of the Indian Penal Code pic.twitter.com/ZLcxG6SyIg

​"Twitter can't get away with its unilateral policies in India. The suspended account has been known to spread views about our Hindu culture. How could Twitter suspend it?", asked Sharma while talking to Sputnik.

"The accused (Twitter) was swift and ruthless in suspending the Twitter handle of True Indology after one Roopa Moudgil, IGP Home Secretary, Karnataka, took to social media spewing venom against a particular community for peaceful Diwali celebrations", states the complaint, a copy of which has been accessed by Sputnik.

The row that led to the suspension of True Indology's account was triggered after Moudgil, an official from the state of Karnataka, backed a ban on firecrackers imposed by several Indian states in the lead-up to the Hindu festival of Diwali (14 November).

Moudgil claimed that the use of firecrackers isn't mentioned in any of the Hindu scriptures, a point vociferously debated by True Indology, which argued otherwise.

Dear @TIinExile , u r bringing in things which were unsaid. Govt/ NGT banning it is based in certain criteria. As a person who works for govt,I will ask people to follow orders. Argument between u n me was tht u said crackers date back to very ancient times. I disagreed. 1/2 https://t.co/r1YtWw9Ntr

The suspension didn't sit well with many of True Indology's 239,000 followers, as #BringbackTrueIndology remained the top trend on Indian Twitter last week.

Many prominent public personalities, from politicians, police officials, and academics to Bollywood celebrities have come out in support of True Indology.

Please count me in for any kind of financial assistance from my side for the Hindu cause. @TIinExile#BringBackTrueIndology

@jack @Twitter @TwitterIndia your bias and Islamist’s propaganda is embarrassing, why did you suspend @TIinExile ? Because he busted fake narratives of our history? Shame on you, waiting for the day when you will be banned in India, hope @PMOIndia takes action against twitter.

​Meanwhile, leaders from both the governing Bharatiya Janata Party (BJP) as well as opposition Congress have advised Indian officials against arguing with citizens on social media platforms.

Government offices should be on social media but not government officers. Their handle should serve the citizens b'coz that's why they are in office.
(Perhaps in private capacity they may be on it but then they should not comment on religion/politics etc)#BringBackTrueIndology

Doesn't befit IPS officers of the country to be arguing with anonymous Twitter Handles that too during working hours. Make a point, let it go, you aren't winning anything by arguing on SM!

The American social media giant has on several occasions found itself in the firing line of Indian social media users. Last week, BJP parliamentarian Meenakshi Lekhi, who headed a joint parliamentary panel, was quoted as saying that the California-headquartered company had tendered a written apology to India for depicting India's Ladakh as part of China.

"Twitter has tendered an apology in an affidavit form before the parliamentary committee. It has been signed by Damien Kieran, the Chief Privacy Officer of Twitter", Lekhi reportedly said.

Lekhi further said that Twitter had assured her of its "rectifying" the cartographical error by the end of November.

In September, safety concerns were raised on Indian social media after an official account of Prime Minister Narendra Modi was hacked on Twitter.