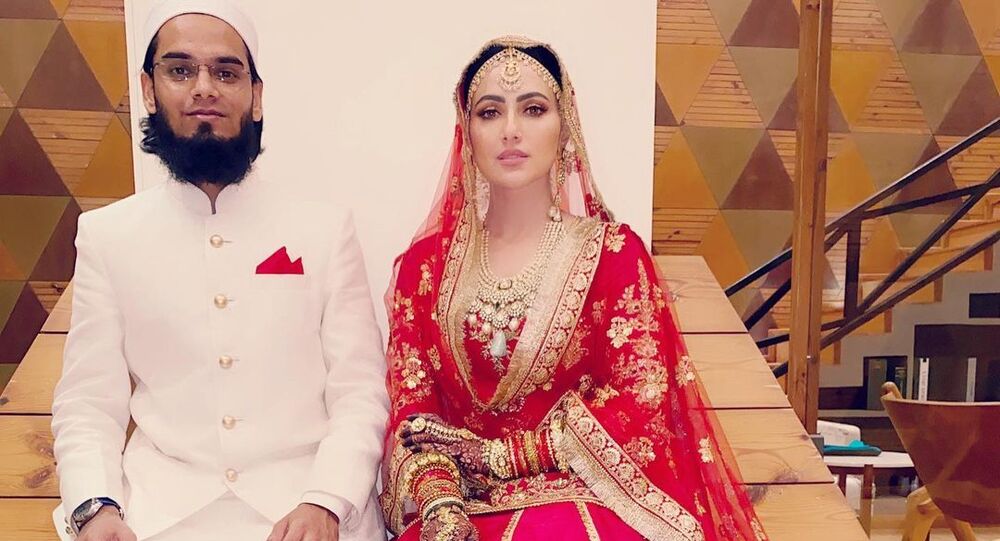 Sana Khan, who shot to fame with her stunning performances in the movie “Jai Ho” and the TV show “Bigg Boss”, took the internet by storm on 8 October when she quit showbiz, citing religious reasons. She also had a big fall-out with her boyfriend, dancer Melvin Louis in February, whom she had accused of cheating on her and domestic violence.

Sana Khan, who was once one of the hottest actresses in Bollywood and on Indian television, surprised her fans yesterday by revealing her marriage to Gujarat-based Mufti Anas. The couple tied the knot on 20 November in an intimate ceremony.

In a viral video of her wedding, she can be seen wearing a white gown with a hijab and holding hands with Mufti Anas, who donned a white kurta pyjama paired with a sleeveless jacket. They walked down the stairs, sat next to each other and cut the wedding cake in the presence of their family members.

While many celebs and netizens offered congratulatory wishes for their wedding, some Twitterians didn’t mince words, trolling them severely.

One netizen wrote, “She dreamt of marrying Salman Khan but married a skeleton whose total weight is lesser than the weight of Sana Khan’s gown (sic),” while another wondered, “Has she been brainwashed?”

Another social media user took a jab at them, saying “Wearing a catholic wedding gown and cutting cake and marrying a maulvi (Islamic scholar). I wish them a happy married life, but I can see the future drama from here onwards.”

She dreamt of marrying Salman Khan but married a skeleton whose total weight is lesser then weight of sanakhans gown #SanaKhan pic.twitter.com/QRKfPwOfpW

#SanaKhan
What next? ISIS?
This is how she is going to serve humanity?
She quit acting by saying she will serve humanity and now she married a maulana
Is this the way to serve humanity?
Typical religion or typical people?
Bullshit.@Imamofpeace what are your views on this? pic.twitter.com/1etgl6wLMw

When we you do full preparation for a Christian wedding with Melvin Lewis, but end up marrying Mufti Anas at the last moment. #SanaKhan pic.twitter.com/e5HD0DxCJs

Many tweeple came forward in Sana's support and slammed the trolls for their 'hypocritical' views and making nasty comments, leaving netizens divided.

Just saw #SanaKhan trending on Twitter. Congrats girl! Must be a happy moment for her right? But, read some tweets and honestly not shocked at those judgemental & hypocritical tweets.. Why don't we fix our lives instead of questioning her marriage or choice? IT'S HER LIFE!

.#SanakhanMarriage #SanaKhan got married, But some self proclaimed nationalists are having a lot of problems with her marriage.
But they never says those who marry with who uses drugs. pic.twitter.com/AZRXajf8Dc