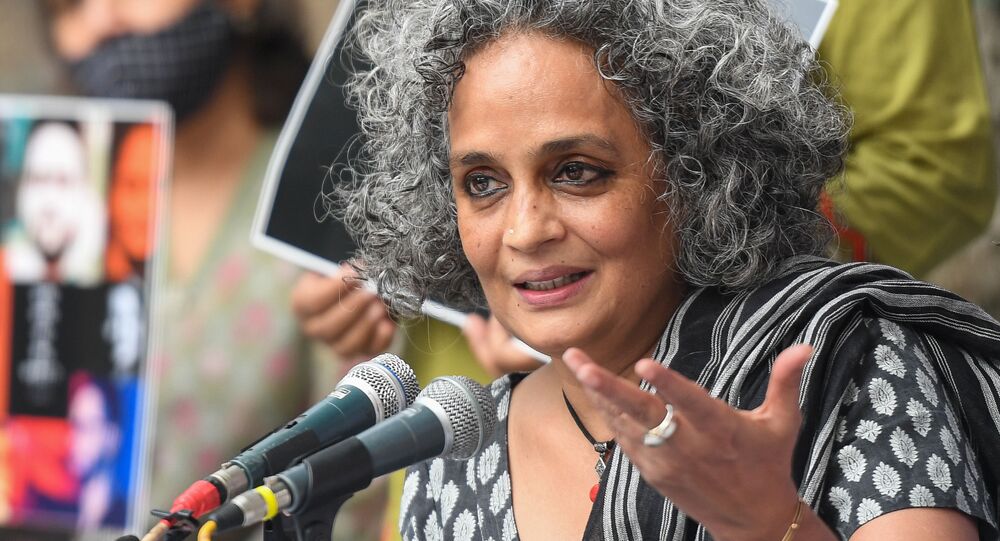 Arundhati Roy's banned book, Walking With the Comrades, has been described by The Washington Post as the “riveting account” of a face-off between left-wing extremist guerillas in the forests of central India and the Indian security forces.

Man Booker Prize Winner and social activist Arundhati Roy has reacted strongly to a book of hers - which is on the postgraduate coursework syllabus in India's Tamil Nadu state - being banned and she expressed satisfaction that the controversial work would have been read by many people before the authorities decided to outlaw it.

“It was my duty as a writer to write it. It is not my duty to fight for its place on a university curriculum. That is for others to do or not do. Either way, it has been widely read and, as we know, bans and purges do not prevent writers from being read,” Roy said in a statement, which was also shared with Sputnik on Friday.

The bestselling author of The God of Small Things (1997) said in her statement that “oddly enough”, she was “more happy” than sad at one of her other books being banned.

“I am glad it has been taught for several years. I am not in the least bit shocked or surprised that it has been removed from the syllabus now,”’ Roy remarked.

Roy, a political activist, further reasoned that the actions of the present Indian government were not just “detrimental” to the government’s critics, but also to millions of its own supporters. She was referring to the Bharatiya Janata Party (BJP) federal government led by Prime Minister Narendra Modi that has in the past been accused by writers such as Roy of revising the Indian education curriculum to suit the agenda of Hindu nationalism.

“It will limit and stunt our collective intellectual capacity as a society and a country that is striving for a place of respect and dignity in the world," the 58-year-old Roy added.

The banned book, ‘Walking With the Comrades’, was part of the Master of Arts (English) coursework at Manonmaniam Sundaranar University. Akhil Bharatiya Vidyarthi Parishad (ABVP), the student wing of Rashtriya Swayamsewak Sangh (RSS) which is linked to ruling BJP, had complained that the book glorifies the extremist left-wing Naxalite movement.

Acting on ABVP’s complaint, the university’s Vice Chancellor K Pitchumani is said to have withdrawn the book from the coursework on Wednesday.

However, the university administration’s decision sparked political outrage in the southern non-Hindi speaking state, which is ruled by All India Dravida Munnetra Kazhagam (AIADMK), a regional ally of the BJP.

The main opposition party in Tamil Nadu, Dravida Munnetra Kazhagam (DMK), accused the state authorities of crumbling under pressure from the BJP and demanded the book be re-introduced.

Former federal minister and DMK’s General Secretary Andimuthu Raja emphasised that any decision to change the coursework should have been taken by a properly constituted board rather than under political pressure.

Arundhati Roy should be condemned in strongest terms. When the higher education is state subject, why is the ADMK government acts according to the diktats of BJP wonders Raja. In the line of VC of Anna University, Manomaniam Sundaranar VC is 2/n