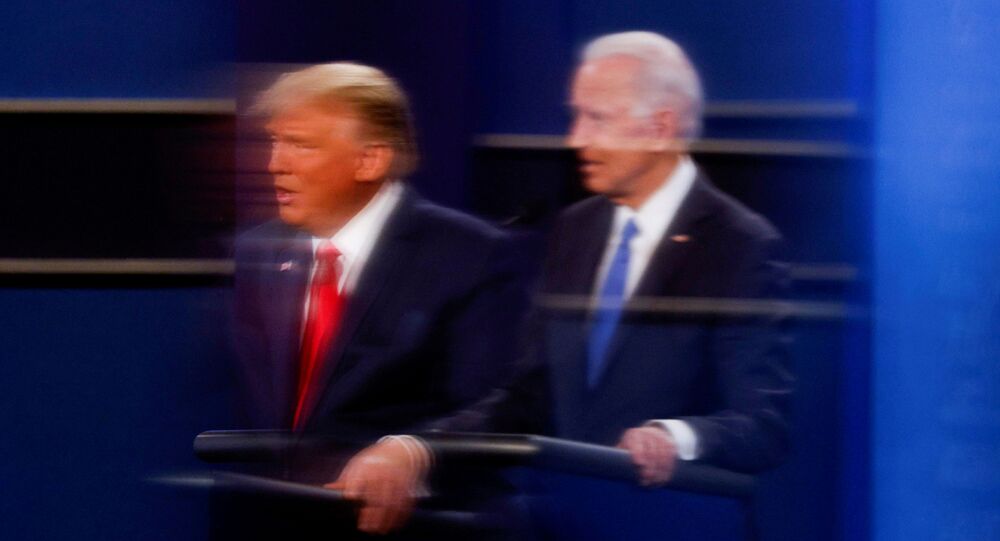 Change of Guard in the White House Not to Affect Indo-US Relations, Analysts Say

India has been closely watching the US elections, as major media outlets project the Democrats back in power even though the vote count is still underway. Joe Biden, who was declared president-elected by US media, during his campaign pledged to restore the respected leadership of America on the world stage and launched a transition team.

Indian Prime Minister Narendra Modi hailed the projected victory of Joe Biden and "Vice President-elect" Kamala Harris last week, and recalled Biden’s contribution during his tenure as vice president of the United States under the Obama administration to strengthening Indo-US relations as “critical and invaluable”.

Sonia Gandhi, the chief of the main opposition Congress party, in her congratulatory message to Indian-origin Kamala Harris, said, "...I know you will work to heal and unite a bitterly divided nation, that you will strengthen the ties of friendship with India”.

As New Delhi looks forward to renewing its warm relations with a potentially new US administration, strategic observers in India discuss the emerging equation between the two countries with Sputnik.

The relations between India and the United States enjoy bipartisan support among both the Democrats and Republicans, suggest the observers, who do not foresee much policy change during Joe Biden’s presidency, though the nuances and style/focus could vary.

“Most of the current policies, even those adopted by Trump, are derived from the Obama administration when Biden was vice president. He knows India well and values India’s rise as a 'natural ally of the US'”, says Harinder Sekhon, a New Delhi-based independent foreign policy analyst.

Addressing the recent tensions between India and China through the prism of the foreign policy vision of the Democrats, Sekhon points out that even though then-Vice President Biden saw value in doing business with China, he was harsh on Beijing during his poll campaign and said, “The US needs to get tough on China”.

‘’But he (Joe Biden) also wants to seek China’s participation in addressing global challenges like climate change and North Korea. So, India will have to watch if the Biden administration would be as forthcoming on China’s transgressions on India’s land borders as the Trump administration’’, she suggests.

The analyst says Biden was all for reviving multilateralism, which could mean some pressure on India to join global trade groups like the Trans-Pacific Partnership (TTP), which the US is likely to revive and rejoin if incumbent President Donald Trump leaves his post.

Bilaterally too, trade has remained a tricky issue between India and the US, and it would likely remain so. The challenge for India and the US would be to find a common ground between ‘Making America Great Again’ and ‘Make in India.’

"That will be tough’’, cautions Sekhon, adding that a potential Biden administration is likely to be more liberal on immigration and the H1B visa regime, benefitting thousands of Indian professionals who have been impacted by the policies of the Trump administration.

But on contentious issues such as India’s acquisition of the S-400 weapon system from Russia, Kashmir, the Citizenship Amendment Act, etc., the US is unlikely to create any hurdles, as Biden would be too preoccupied with domestic concerns like reviving the economy and healing a racially polarised nation, the expert believes.

“I don’t anticipate any major change, but there might be some because what has happened is you have a divided Democratic Party with the so-called liberals, progressive liberals, conservatives, and moderates like Joe Biden himself. There might be temptation on the part of the left of the Democratic Party to be more vocal on issues like Human Rights or issues which India considers to be internal to India, like Kashmir. But by and large I don’t anticipate any major change as far as US policies towards India,’’ observes Professor Pant.

Professor Pant, however, says it would be easy for Biden to restore India’s status under the Generalised System of Preferences (GSP) or to go back on the tariffs which Washington had imposed on Delhi.

President Donald Trump withdrew duty-free benefits to Indian exports to the US under GSP in June 2019, which enabled an estimated export worth $5.6 billion. New Delhi retaliated and imposed tariffs on 28 US products a month later.

“But the trade deal has been hanging in the air for quite some time. We were told that a limited trade deal was very close to an agreement. But now Biden will be in power, it will have to be re-negotiated to open up the entire gamut of the deal. I therefore, do not foresee that a trade deal might be feasible immediately, as it would have been had Trump continued in office”, he says.

The expert adds that it would not be difficult for Prime Minister Modi to reconnect with a possible new administration, as he has already worked with Biden during the latter's vice presidency.

“Both the governments will have to deal with each other based on the requirements of the nations and they don’t have the luxury of picking and choosing”, Professor Pant points out.

Speaking about Kamala Harris and her Indian ancestry, Professor Pant is of the opinion that it would not add much leverage to Indo-US relations.

“Kamala Harris has not articulated her Indian origin during the elections. She has asserted her Black identity. She has also been critical on certain issues. I don’t think her election would change dramatically the India-US trajectory. In the last few decades, Indo-US relations have become more institutionalised. It is no longer a partisan issue, or personality driven,” concludes Professor Pant.

Prime Minister Modi had a unique camaraderie with the incumbent President Donald Trump and both held two joint rallies – one in Houston, Texas, in September 2019, where Modi endorsed Trump, saying “Next time, a Trump government,” and the second in his home state of Gujarat in February 2020.

The Trump administration also signed a landmark defence deal on 27 July, just before the US elections, and offered to “stand with India in its efforts to defend its sovereignty and liberty”.