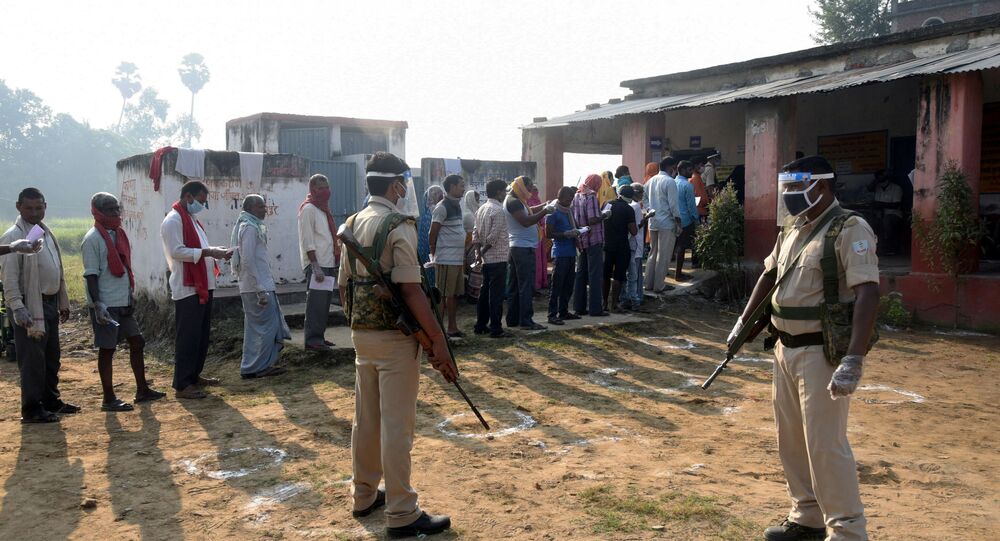 The first major election in India during the pandemic was held in Bihar, where 57.05 percent of over 729 million eligible voters cast their votes for the 243-strong legislative assembly. The polls were held in three phases – 28 October, 3 November and 7 November and counting of votes was held on Tuesday (10 November).

Prime Minister Narendra Modi’s Bharatiya Janata Party (BJP)-led coalition NDA has managed to scrap through a closely-contested poll for the legislative assembly of Bihar, one of the poorest states in India.

Despite pre-poll predictions about the victory of the opposition Mahagathbandan (Grand Alliance), the BJP-led National Democratic Alliance (NDA) secured 125 seats in the 243-member assembly. The opposition alliance, led by regional Rashtriya Janata Dal (RJD) and India's main opposition party Congress only managed to get 110 seats, while independents and others got 8 seats.

The results were announced late on Tuesday night by the federal Election Commission of India.

Hailing the victory of the ruling alliance, Prime Minister Modi said each and every voter of Bihar clearly stated their priority was only development.

“Bihar has voted for the good governance of the 15-year rule of NDA, which shows what the dream of Bihar is, what the expectations of Bihar are,”  Modi wrote in a tweet in Hindi.

Though BJP had announced Kumar would lead the government, there were indications that it might reconsider the decision in view of its majority in the coalition.

“PM Modi's image sailed us through (this election)," said Kailash Vijayvargiya, National General Secretary of BJP after the announcement of results.

Amongst the parties, RJD, led by scandal-tainted Lalu Prasad Yadav, emerged as the single largest party, with 75 seats. But its main alliance partner, the national opposition Congress party could manage only 19 seats, while three communist parties together accrued 16 seats.