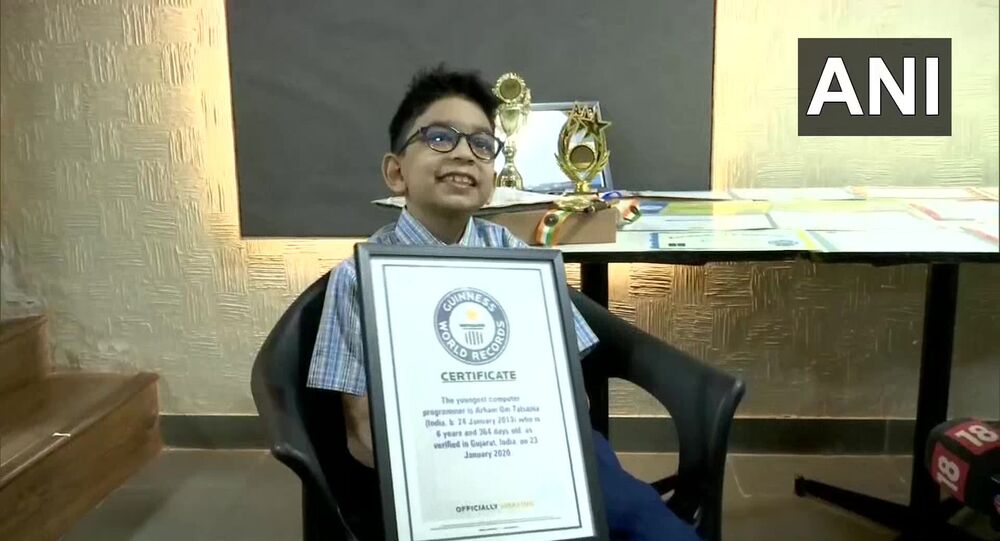 The child's father, Om Talsania, a software engineer, saw a spark in Arham Om Talsania at a very young age. He gave his son guidance and taught him basic programming.

Six-year-old Arham Om Talsania from Ahmedabad in the Indian state of Gujarat has become the "World's Youngest Computer Programmer" by clearing the programming language Python.

It turned out to be the biggest achievement for the boy who set a new milestone by making into the Guinness World Records.

Arham, a class 2 student, credits his father Om Talsania for his success, noting it was his dad who taught him Python, and leading the youngster to passing the Microsoft certification exam at the Pearson VUE test centre.

"My father taught me coding. I started using tablets when I was 2 years old. At the age of 3, I bought gadgets with iOS and Windows. Later, I got to know that my father was working on Python (programming language)", Arham told the Indian news agency ANI.

​"He was very much interested in gadgets. He used to play games on tablet devices and solve puzzles. When he developed an interest in playing video games, he thought to create it. He used to see me doing software programming and coding", said Arham's father Om Talsania.

Following in his father's footsteps, Arham began putting his knowledge into practice by developing games.

"When I got my certificate from Python, I was creating small games. My father applied for the Guinness Book World Record and after seeing all my work, I bagged the title of World's Youngest Computer Programmer from Guinness World Records a few months back", said Arham who achieved this record in January 2020 but just received the certificate recently.

Arham aspires to be a business entrepreneur and help everyone, saying: "I want to make apps, games, and systems for coding. I also want to help the needy".

You Must Be Like That: BLACKPINK Conquers Guinness World Records