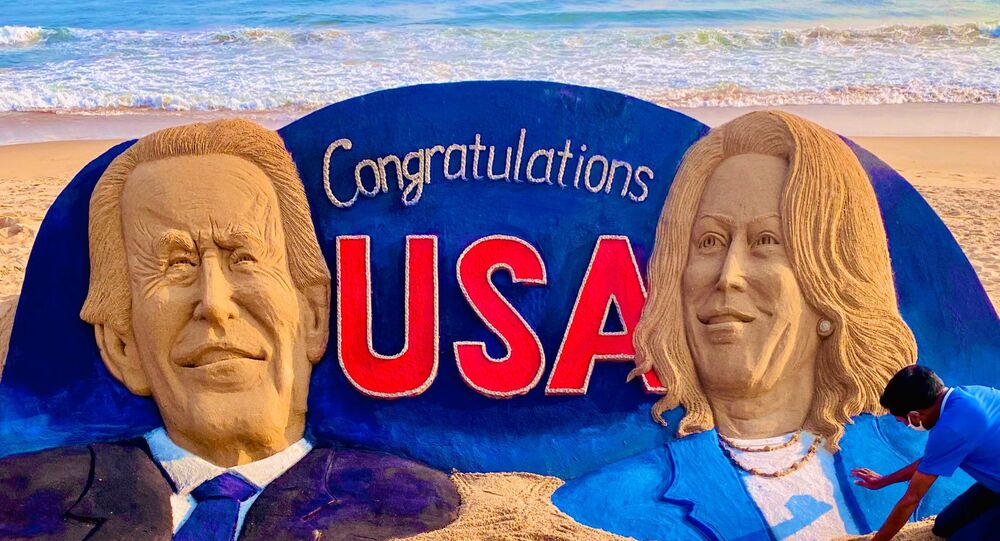 The entire world has been waiting in anticipation for the results of the US elections between Democrat Joe Biden and Republican Donald Trump. Despite the vote count continuing in several key states, American media outlets have projected Biden as the winner of the race.

Indian sand artist Sudarshan Pattnaik has created 25 foot-long images of projected US President-elect Joe Biden and his deputy Kamala Harris on Puri Beach in the state of Odisha.

Pattnaik is known the world over for his sand art on social issues and has represented India in over 60 international sand sculpture championships and festivals around the world.

Speaking to Sputnik on Monday, Pattnaik said it's a small gesture to congratulate projected US President Biden and Vice President Kamala Harris.

"It is a 25-foot-long sculpture and 10 tonnes of sand was used for it. It took me around six hours to create it. I started making it on Sunday morning and finished it by the evening", Pattnaik said.

The noted sand artist also expressed happiness about an Indian-origin woman potentially being the US vice president. "I would like to congratulate Kamala Harris. It's a proud moment for every Indian. She always spoke about her Indian roots during the campaign".

Pattnaik further mentioned that he's created sculptures of former presidents, but this is the first time he's made an image of a possible vice president.

"India and the US have always shared good relations and I feel with Harris coming into power, relations are going to get better", he told Sputnik.

Last week, Pattnaik created a similar sand sculpture with the pictures of Biden and Trump along with a question mark in between, highlighting the dilemma of millions who were eagerly waiting for the final results of the US election.

Biden is reportedly set to become the oldest elected president in the history of the US, while Harris is also set to make history by becoming the first woman and Asian-American to become vice president of the United States.