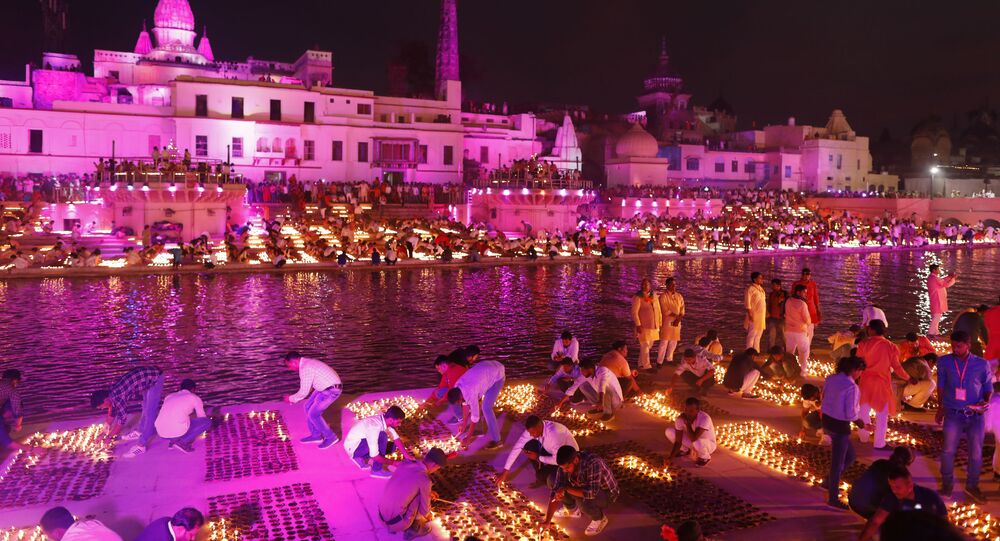 India, which celebrates a string of annual festivals oozing with ancestral rituals and traditions, gets decked up like a bride every year for its biggest holiday – Diwali, which is also called the festival of lights. While the entire country is lit with earthen lamps and fairy lights, the skies sparkle with firecrackers.

During the ominous year 2020, many who'd hoped to enjoy the Diwali festivities may have different plans, which may affect the holiday spirit in India. This year, the skies on Diwali night could lose their glitter.

Owing to the health issues looming over the country because of Coronavirus and severe air pollution, several Indian states have imposed a ban on setting off firecrackers that otherwise make for an important part of the Diwali tradition in the country.

© CC BY-SA 4.0 / Khokarahman / Diwali Festival
India Alerts Intel Agencies on Illegal Import of Hazardous Firecrackers from China Ahead of Diwali
New Delhi, India's capital and home to over 30.2 million residents, is presently battling its annual struggle with smog that blankets the region with the onset of winters. By the end of October, farmers from Delhi’s neighbouring agricultural states of Punjab and Haryana began burning off the leftover stubble on their fields to prepare the land for the next sowing season, sending up thick plumes of smoke which drifted in the direction of Delhi with the cold breezes.

While Delhi residents are already complaining of itchy eyes, sore throats and frequent headaches caused by the “severely” polluted, choking air – as classified by the Central Pollution Control Board – the capital city's Chief Minister Arvind Kejriwal on 5 November announced a ban on the use of all firecrackers until 30 November.

Joining Delhi, other Indian states including Rajasthan, Odisha, West Bengal, Sikkim, and Maharashtra have also decided to curb the risk of major air pollution by imposing a ban on the sale and setting off of crackers till the end of November.

Earlier this month, Indian health experts had warned that increasing air pollution in densely populated cities like Delhi and Mumbai, especially, could pose serious threat to Coronavirus patients – because the deadly virus is known to attack the lungs and respiratory systems of humans. Indian pulmonologists have also noted that amid such a dangerous national health emergency, people with pre-existing respiratory issues like Asthma could also face the brunt of the toxic post-Diwali air.

Meanwhile, some Indian states have strategised a way to keep air pollution in check, while making sure that Chinese firecracker companies lose revenue from India this year amid border tensions.

India and China have had a stand-off along the Line of Actual Control (LAC) in Ladakh since April after both blamed each other of violating the LAC. In a hand-to-hand combat in mid-June, India lost 20 soldiers following which anti-China sentiments gained momentum in the country.

States like Haryana and Madhya Pradesh have banned the sale and distribution of “imported” firecrackers, most of which are made in China.

Other states like Karnataka and Gujarat are also reportedly saying no to firecrackers this year.

Keeping in line with the decision to ban firecrackers, netizens are using social media to urge others also to refrain from setting off “Patakhe” (firecrackers).

Congratulations to Arvind Kejriwal for taking the bold step to ban fire crackers ahead of Diwali. These are the kind of policy measures that can make catlyctic impacts on all. Long needed intervention indeed!!!

I'm in support of #FirecrackersBan

It's already been implemented in Rajasthan, and fines are issued for those who will be found burning firecrackers.

It's only polute our environment and not good for people having respiratory disease.

It's burning ur own money.

It will spread more pollution, more infection and threat.

Let us ask even Gujarat Govt. to BAN Fire Crackers this Diwali.#SafeGujarat#NoFireCrakers

P.S: If you are with me that copy paste

Firecracker vendors, who are facing substantial losses this year due to the pandemic and bans, are urging state governments to permit the sale of eco-friendly 'green' firecrackers till Diwali. Green firecrackers have a small shell size compared to traditional firecrackers. They are manufactured with less harmful raw materials and have additives that reduce emissions by suppressing dust.

Shopping for new clothes and gold, India is gearing up for Diwali on 14 November. Buildings, roads and lamp posts across the country are lit up with lights.

Take a look at some Diwali decorations from last year, when social distancing was not a thing, gatherings did not have to be virtual and festivals did not entail fatal health risks.