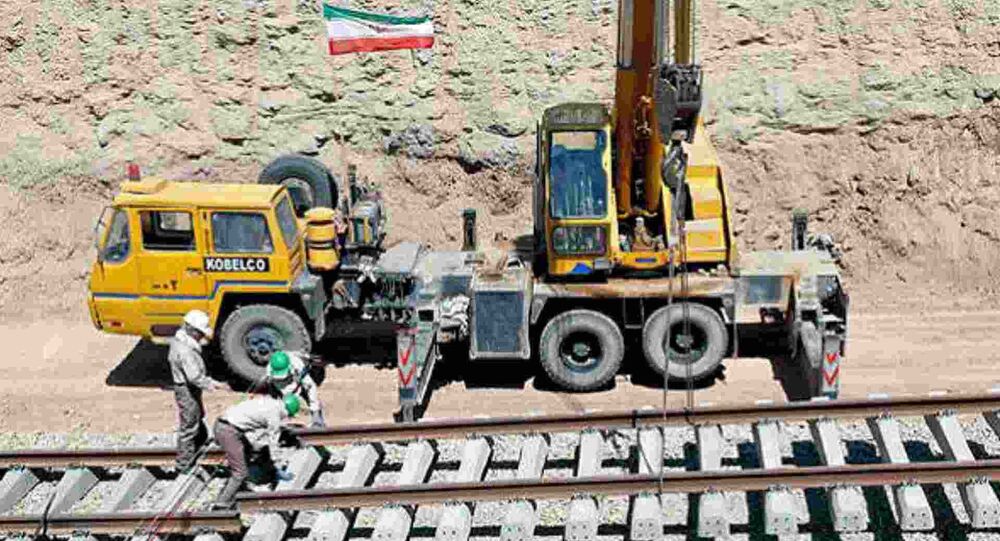 India’s External Affairs Minister Subrahmanyam Jaishankar and Defence Minister Rajnath Singh made a brief stopovers in Tehran as they returned from the Shanghai Co-operation Organisation (SCO) Summit in Moscow in September. Their visit came after Tehran decided to exclude India from the rail project.

India will be allowed to use the forthcoming Chabahar-Zahedan railway in Iran to transport goods to Central Asia and Afghanistan if it shows it has faith in the project's strategic advantages, Sputnik has learnt.

The prevailing consensus in Iran is that the project could “only thrive” if it served as a “gateway” to the markets of Afghanistan, Central Asia and India.

Laying the tracks for the Chabahar-Zahedan railway started at the Chabahar end on Wednesday, Tehran Times reported.

According to the report, Iran-headquartered Khatam-ul Anbiya Construction is the contractor.

The railway is supposed to connect Chabahar Port on Iran's south-eastern coast with Zahedan, about 430 miles due north in the Sistan and Baluchistan Province near the country’s border with Afghanistan.

The railway which is part of a larger infrastructure complex has been exempted from American sanctions that have otherwise battered many sectors of Iran's economy.

India’s state-owned Indian Railways Construction Ltd (IRCON) was originally the contractor before it was dropped by Tehran in July this year. It was dropped reportedly because of “delays” in getting funding to Iran from India which resulted from American economic sanctions. Reports of India exiting the project were denied by the Ministry of External Affairs (MEA) back then.

The US sanctions against Tehran have been intensifying ever since President Donald Trump unilaterally pulled Washington out of the Iran nuclear deal, officially known as the Joint Comprehensive Plan of Action (JCPOA), in May 2018.

Iran’s decision to leave the Indian company out from the railway project came against the backdrop of reports about Beijing and Iran having finalised a $400 billion security and economic deal.

Fears have been expressed in India about China’s growing influence in Iran, which has traditionally enjoyed good relations with New Delhi. Domestically, India’s main opposition party, Congress, blasted the Narendra Modi government in July after it quit the project.

“India dropped from Chabahar Port deal. This is the diplomacy of the Modi government that won laurels even without getting the work done. China worked quietly but gave them a better deal. Big loss for India,” Congress spokesman Abhishek Manu Singhvi tweeted in July.

Iran’s President Hassan Rouhani had called on India’s External Affairs Minister Jaishankar last December to arrange funding to the railway during the latter's visit to the country.

Jaishankar had also assured Tehran after the India-Iran Joint Commission Meeting last year that New Delhi would “accelerate” the Chabahar port project, in the lead-up to Tehran’s July decision to go ahead with the railway without India. The Indian minister had also been in Tehran in September this year, after he made a brief stopover on his return from the Shanghai Co-operation Summit in Moscow.

For India, the Chabahar Port and allied infrastructure projects would allow it to access Afghanistan and Central Asian countries without having to go through Pakistan. India's presence is Tehran is also meant to counter China, which is already developing Gwadar, a warm-water port in the Arabian Sea next door in Pakistan.

In an interview given to a German publication last week, Pakistani Prime Minister Imran Khan expressed strong reservations over India’s involvement in Afghanistan in the wake of the American troop pull-out from the region.

Earlier this week, India fulfilled its pledge to donate 75,000 tonnes of wheat to Afghanistan as part of its development aid to the country. Most of the grain has been routed from India to Afghanistan through Chabahar.

Would like to express immense gratitude to India on completing the donation of 75,000 MT of wheat in 10 installments during April-Sept to beef up food security, especially during the #COVID__19 testing times. A friend in need is a friend indeed! 🙏 @IndianEmbKabul @MEAIndia

US Slaps New Sanctions on Iran, Targets Ministry of Petroleum and Top Official