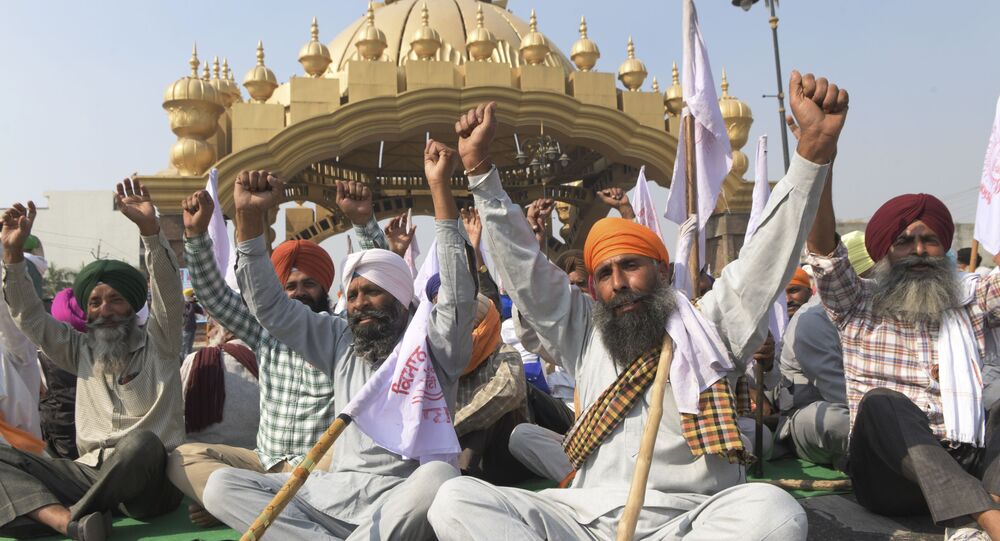 In September, Prime Minister Narendra Modi's government passed three contentious farm laws that sparked countrywide protests and heavy criticism from opposition parties. Protesting farmers view the new laws as targeting them, and are concerned that this legislation would empower corporations at their expense by driving prices down.

Hundreds of farmers linked to different associations on Thursday blocked the state as well as national highways throughout India to protest against the recently passed farm laws by Narendra Modi's government.

The protest is being staged following a call for a road blockade call issued by a farmers' body, AIKSCC.

This is being done on a nationwide call of the All India Kisan Sangrash Coordination Committee (AIKSCC). ‘Chakka jam’(road blockade) is being done by more than 250 farmer organisations across the country from 12 p.m. to 4 p.m. (local time).

#Farmers try to block national highway as a part of #protest against Three Farm Bills at Kunchanapalli in #Guntur district.

​According to Jagmohan Singh Patiala, a working committee member of the AIKSCC, apart from protests against farm laws, they will also protest against the suspension of goods trains in Punjab and Haryana states. The supply of coal to thermal power plants in Punjab has been severely affected since Indian Railways halted the operation of trains due to the blockade of some tracks by farmers.

“After Chakka Jam, we will plan our strategy for the 26-27 November Delhi Chalo (let's head to Delhi) nationwide programme for which the Delhi Municipal Corporation and even Union government have given us permission to protest at the Ramleela Maidan, an official protest venue, from 26 to 28 November. We are waiting for approval from Delhi Police,” a statement from AIKSCC read.

Patiala further mentioned that the protest in front of railway stations, toll plazas, the federally ruling Bharatiya Janata Party (BJP) leaders’ houses, and petrol pumps will continue as usual in the states.

Dr. Darshan Pal, President of Kirti Kisan Union (KKU), told media on behalf of all unions: "We regret inconvenience to the masses in general, but ambulances and fuel vehicles are being given way.”

According to the central government, the farm laws aim at liberalising the farm sector and “provide freedom” to farmers and traders to trade at a venue of their choice outside established structures regulated by the Agricultural produce market committee.

However, the country's main opposition party Congress, along with many other opposition parties, and several farmers' organisations have been protesting against these legislation. They say that these laws will harm the interests of farmers and benefit the corporates, a claim denied by the central government.