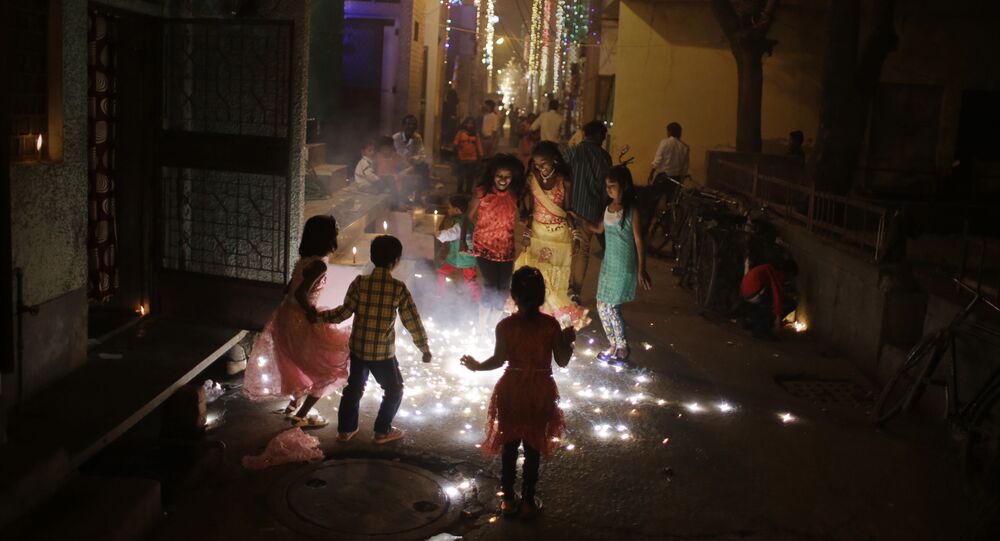 For millions of Hindus across India and other parts of the world, bursting firecrackers on biggest Hindu festival Diwali has remained pivot for celebrations despite the ban by the government over the concerns of growing pollution. From decades, these crackers are sold with the pictures of Hindu gods and goddesses imprinted on them.

A group of Hindu men, wearing saffron scarfs, barged into a firecracker shop and threatened the Muslim shop owner for selling the crackers with the pictures of Hindu god and goddesses imprinted on them.

A video of the incident, going viral on social media, shows dozens of men threatening the shopkeeper of setting the shop on fire.

A man in the group objected to crackers being sold with pictures of the Hindu goddess, saying it is a disrespect to Hindu gods as they get stomped under feet after being busted on streets.

The shopkeeper, however, explained that this is not the first time Diwali crackers are packaged with pictures of deities as this has remained a trend over years.

“I will burn down your shop. Your license would be suspended, then don’t say Hindu’s made you jobless,” a man threatened the shopkeeper in the video.

The video has led to outrage in sections of people on social media for bullying the Muslim man, calling the men as “goons” and “bigots”.

@BJP4India @narendramodi
This is the achievement of 6yrs. Breeding bigots and illiterates who can outrage on anything without any fear of law of the land. Give them proper employment. without employment/meaningful occupation these visuals will become common place.

“Laxmi bomb and Saraswati bomb, [named after Gods] are not new, I've used them for at least 10 years and I don't remember any outrage then, why now?”, said a Twitter user, saying its “hatred”.

This is not about Pictures of Hindu Goddesses on Crackers. This is about Sanghis bullying Muslims, in the name of Religion.

Laxmi Bomb & Saraswati Bomb have always been burst by Hindus every diwali for decades now.

The firecracker makers and the ones bursting them are Hindus. https://t.co/gZUnyN8PtF

​Others recalled the incident in France, where a teacher, Samuel Paty, was beheaded by a Muslim teenager after the former had shown a caricature of the Prophet Muhammad in class.

We know what happened in France when someone showed a cartoon 🤔

The incident happened in India, however, the exact location is still not verified.