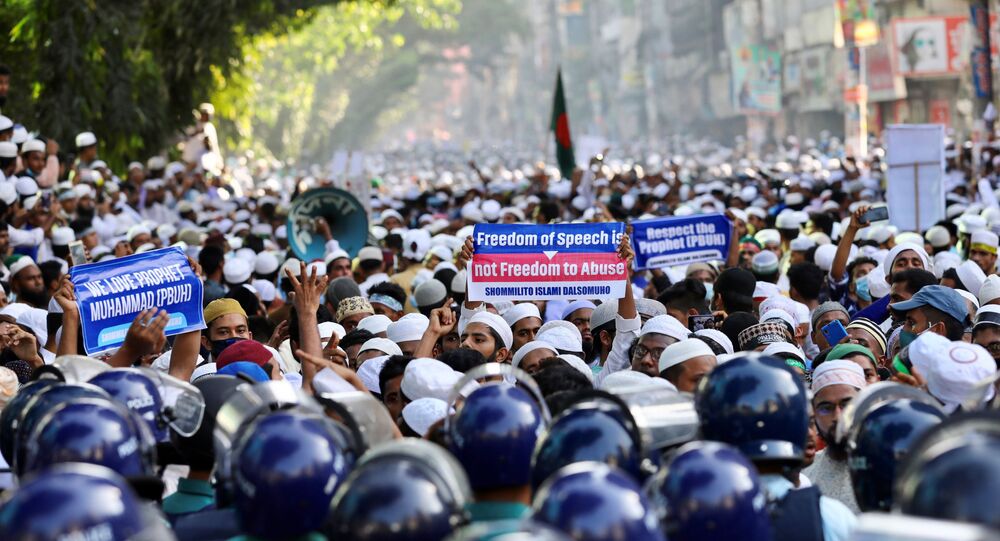 The disappearance of Tithy Sarker, a Bangladeshi Hindu girl, has attracted sympathy from Indian social media users, who have called on their government to take up the matter with Dhaka. Many Indians also cited the Citizenship Amendment Act (CAA), which fast-tracks Indian citizenship applications for persecuted people from India's neighbours.

The disappearance of a third-year-undergraduate student hailing from the minority Hindu community in Bangladesh’s capital Dhaka has refocused attention on the radical Islamist underbelly of the South Asian country, which has seen motivated attacks against secular and atheist bloggers in the past.

Tithy Sarker a student of Jagannath University #Bangladesh has been expelled because of „insulting #ProphetMohammad “ Now she's been missing for five days! Anti-#France protest turns into Horror,yesterday hundreds of Muslims burned a guy bcz of Insulting #Islam. #whereIsTithy pic.twitter.com/yF5AcAcDO4

​According to reports in Bangladeshi media, Tithy Sarkar, a student at Jagannath University (JnU), went missing on 25 October, two days after she was suspended by her university for making derogatory remarks against the Prophet Muhammad. Sarker was reportedly on her way to the police station and was supposed to attend the Durga Puja festivities on the day she went missing, her parents have been quoted by local media as saying.

Sarker also serves as the convenor of the advocacy outfit World Hindu Struggle Council at her university. Before her disappearance, she reportedly told local police that her Facebook account had been hacked.

Her alleged derogatory comments, made in Bengali, had gone viral on social media platforms in the lead-up to the university’s action, per reports.

The move by the university followed widespread condemnation of Sarker by social media users, with many even threatening her with dire consequences.

Sarker’s disappearance is said to be the second religiously-motivated attack in the South Asian country within a week. Earlier, a man in his 50s was reportedly burnt to death on suspicion of being “disrespectful” towards the Holy Quran.

Hundreds of #Muslims are shouting #AllahuAkbar and burning a guy! It happened today in Lalmonirhat, #Bangladesh . The accusation was ‘insulting #Islam ‘ Barbaric! pic.twitter.com/Yg4CqLtNFO

​Observers have warned that the coronavirus pandemic could lead to a resurgence of radical Islam in Bangladesh, which has witnessed a lull in terror activity since the assault by Daesh*-linked terrorists at an upmarket café in Dhaka in 2016. The deadly attack left 29 persons dead, including 18 foreigners.

Shafi Mostofa, an assistant professor of world religions, culture, and politics at Dhaka University, wrote in a column in The Diplomat magazine that Ansar Al Islam (AAI), an affiliate of Al-Qaeda*, enjoys over 90 million supporters in the country. He also expressed concern that the group’s activities could see a rise following the pandemic.

Bangladesh also witnessed a spate of attacks by Islamists between 2014 and 2016, when the targeting of secular bloggers became rampant.

The recent attacks in Bangladesh come amid global outrage triggered by a row over Prophet Muhammad caricatures, which has led to two deadly terrorist attacks in France since 16 October.

47-year-old teacher Samuel Paty was beheaded on 16 October by an 18-year-old attacker of Chechen origin after showing caricatures (believed to be the same as those published in the French satirical magazine Charlie Hebdo in 2015) of the Prophet Muhammad to his students.

On Thursday, a woman was reportedly beheaded inside a church in Nice in another terror attack, while two other people were also killed.

Bangladesh, which is predominantly Muslim, witnessed its share of protest, when thousands of Islamists took to the streets of Dhaka in a show of condemnation against French President Emmanuel Macron, who has defended the right to show the divisive cartoons and has said that Islam is a religion "in crisis".

*Daesh, also known as ISIS/Islamic State/IS, and Al-Qaeda are terrorist groups banned in Russia and many other countries.