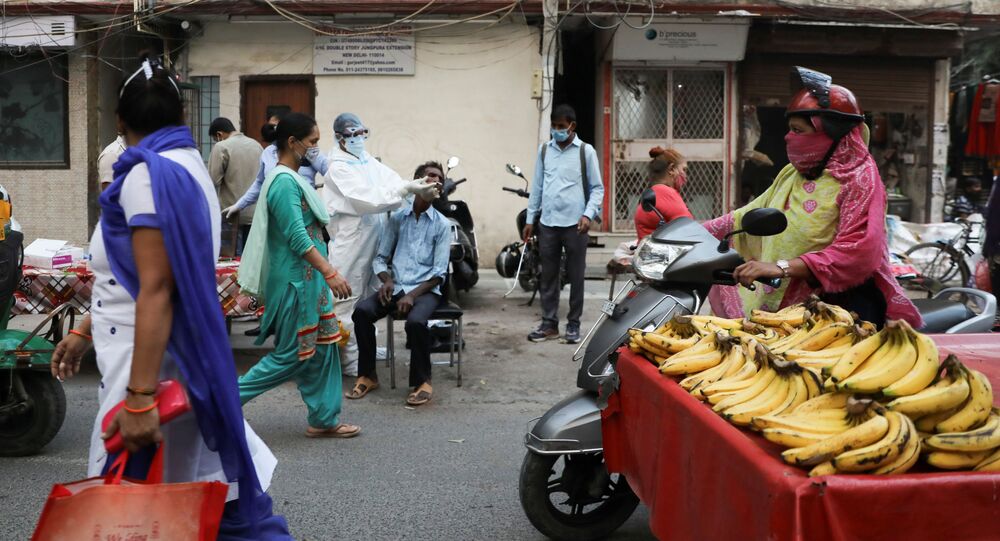 India’s retail inflation, based on the consumer price index, has almost doubled to 7.34 percent this September as compared with 3.99 percent in the same month last year. According to government data, the inflation rate in India is galloping ahead, mainly on account of higher food prices in the country.

Every Tuesday, 42-year-old Anupama Sharma, a resident of Noida Extension in Indian state of Uttar Pradesh, heads to the weekly market to buy vegetables and fruit for her family of five.

This weekly routine, which she had been doing for years, was disrupted briefly during the COVID-19 lockdown in April and May. But now the weekly market is back and Anupama has resumed her visits there, barely a kilometre away from her residence.

But things appear to have changed: talking to Sputnik, she said that vegetable prices have gone through the roof.

“During the lockdown, the prices were comparatively cheaper. However, after the lockdown the vegetable prices have gone up,” Anupama said, adding that almost two to three months ago, she would buy the weekly vegetables for the family for about INR 500 ($6.84). “I now shell out almost INR 850 ($11.64) for the same amount,” she adds.

According to data released by the Ministry of Statistics and Programme Implementation, vegetable prices saw 20.73 percent inflation in September this year over the same month in the previous year. In August, vegetable price inflation was 11.41 percent.

Overall, food inflation totalled 10.68 percent in the month of September this year, against 9.05 percent in August this year.

Economists believe that the Indian economy has been facing inflationary pressure, owing to the disruption of the supply side of the economy due to the lockdown rolled out in response to the pandemic.

Traders in Delhi’s Azadpur Market, which is Asia’s largest wholesale market for fruit and vegetables, say that the production of vegetables has not taken place in the traditional centres, thereby creating a supply shortage and jacking up prices.

Vishwesh Pathik – a trader in the market claims production has come down due to COVID-19 impacting supply.

“Despite the restrictions being lifted, a number of vegetables like cauliflower, beans, and tomatoes are not being supplied from the local and nearby production centres and we have to depend on faraway farms to procure the products,” Pathik said.

He added that as of now, local supply centres should have started sending tomatoes, but instead of this, they are being procured from far away in Bangaluru (Karnataka state). “The supply from the nearby states of Punjab, Himachal Pradesh, and Uttar Pradesh is affected. Unless these states start full supply, vegetable prices will remain firm.”

© CC BY 3.0 / Nick Youngson / Federal Reserve
US Federal Reserve’s Plan to Hold Benchmark Rates at Zero for 3 Years a Boon for India, Experts Say
Even the border tension between India and China on the Line of Actual Control (LAC) in the Eastern Ladakh sector has been partly responsible for a hike in the price of beans and peas, both stapes in India. “Due to the disturbance with China in Ladakh, the supply of beans and peas is affected as they are produced in the Lahaul area,” Pathik added.

Traders are of the opinion that the vegetable prices will only cool down in January.

Manoj, who owns a vegetable retail outlet in the city of Noida in Uttar Pradesh, adjacent to Delhi, told Sputnik, “We expect the supply to be better by the end of December thereby bringing down the price of the vegetables by early January.”

Onion prices are up yet again, posting a meteoric trajectory, with retail prices touching last year's extreme. Pathik says that given the high wholesale rate of the commodity, its retail price could be around INR 100 per kg ($1.36).

Sharing the details and the reason behind the hike in onion prices, Dr. P.K. Gupta, Acting Director of the National Horticultural and Research Foundation said that a vast majority of the summer crop has been destroyed due to rains.

"Nature is not in our control. The summer crop has been impacted by heavy rains. About 50 percent of the summer crop from the Indian states of Maharashtra, Madhya Pradesh, Gujarat, Karnataka, and Andhra Pradesh were destroyed by the rains," Gupta told Sputnik.

Gupta also attributes the price rise to a shortage of onion seeds. Onion seeds were in short supply during the winter sowing season last year and also during the summer season this year. He, however, expects the prices to cool off in the next two weeks.

"Prices will come down as late summer crops from Andhra Pradesh and Karnataka will be available in the market," Gupta added.

Inflation: A Bane for Growth

The Monetary Policy Committee, under the Reserve Bank of India (RBI), postponed a lending rate cut in its August policy announcement due to higher inflationary pressure in the Indian economy. The same stance was maintained in the lending rates, when the MPC met again between 7 October and 9 October.

© AP Photo / Rajanish Kakade
Curious Case of Creeping Inflation in India as Demand Remains Disrupted by COVID-19 Pandemic
When the COVID-19 pandemic hit in March, India's reserve bank lowered the rate 1.15 percent in two off-cycle policy rate announcements to mitigate the impact of the crisis and also to stimulate the economy by keeping the financial markets supplied with liquidity.

In the minutes of this month’s MPC meeting released by the RBI last week, the nation's reserve bank has said that if supply side shocks, especially to food persist, they could destabilise inflation expectations. “Overall in our assessment, headline inflation would moderate in the second half of the current financial year (October 2020 to March 2021)”.