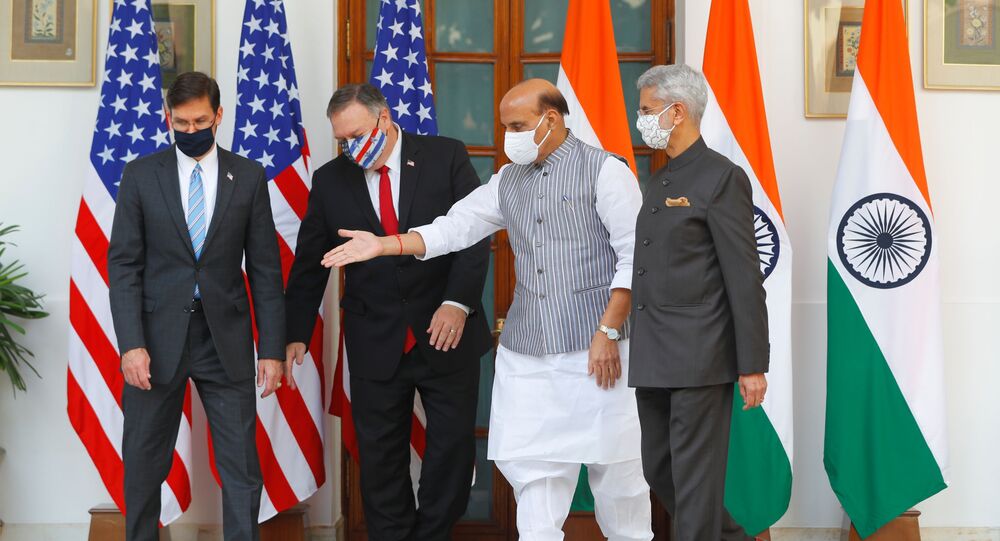 US Advice to Sri Lanka on Picking Sides in US-China Rivalry Kicks Up a Storm, Rebuked by Beijing

US Secretary of State Mike Pompeo will leave for Sri Lanka on a two-day visit starting Tuesday, after he concludes a 2+2 Dialogue with India. From Colombo, Pompeo will be travelling to the Maldives and Indonesia to further America’s Indo-Pacific strategy.

Sri Lankans haven't taken kindly to the Trump administration’s advice that Colombo must pick between the US and China, with many social media users rejecting any foreign interference in the nation's domestic affairs.

yes you are very perfect we do not require sight of US officials here, Sri Lanka hate them in general, No doubt USA would very cleaverky paint another international USA bait to our country, better you get back without visiting Sri Lanka

​Foreign policy observers have also reckoned that there is “not a chance that Pompeo can make Sri Lanka change its mind about China.”

There's not a chance that Pompeo can make Sri Lanka change its mind about China by the way, yesterday. I still remember the Prime Minister's own son posted my article on his twitter this Spring, that's how high the odds are stacked against the U.S there.

​The strong reactions from Sri Lankan netizens come in the wake of last week’s remarks by US Principal Deputy Assistant Secretary Dean Thompson, in which he had called upon Colombo “to make difficult but necessary decisions”.

The US Secretary of State is set to visit Colombo on a two-day visit starting Tuesday evening to “advance common goals for a free and open Indo-Pacific region,” a State Department release underlined last week.

According to Sri Lankan media reports, Pompeo is expected to press Sri Lanka to stop favouring China-funded infrastructure projects and opt for other international project partners instead. As of 2018, China had invested nearly $8 billion in infrastructure projects in the South Asian island nation, with Colombo Port City and the Hambantota Port Projects being the two major ones.

Pompeo is also expected to ask Sri Lanka to accept American funding to the tune of $480 million, part of the USAID-led Millennium Challenge Corporation Compact (MCC). Sri Lankan leadership has in the past expressed strong reservations about the terms of the pact.

The ongoing reconciliation process between Sri Lankan Tamils and the majority Sinhala Buddhist community is another test issue set to come-up in discussions.

“We expect Secretary Pompeo to call upon the Sri Lankan government to strictly follow the 13th Amendment provisions and forge ahead with the promised agenda of devolving power to local councils,” Maravanpulavu Sachchithananthan, the leader of Jaffna-based Tamil rights group Siva Senai, told Sputnik.

Significantly, the US State Department had in February of this year imposed a travel ban on Sri Lanka’s Commander of the Army and Chief of Defence Staff Shavendra Silva over his alleged involvement in “war crimes” at the end of the Sri Lankan Civil War in 2009.

Janatha Vimukthi Peramuna, a left-leaning party, has even asked the Sri Lankan leadership what it was hiding about Pompeo’s upcoming visit to the country.

China hits out at US

Meanwhile, a late night statement by the Chinese Embassy in Colombo took exception to US’ “interference” in Sri Lanka-China relations.

“…the remarks of the US official were filled with the Cold War mentality and hegemonistic mindset doomed to fail, which fully exposed the consistent US practice of arbitrarily interfering in other countries' domestic and foreign policies and forcing small and medium-sized countries to choose sides,” said the Chinese Embassy statement.

The statement further accused the US of “bullying” Sri Lanka into picking sides, as it urged Washington DC to face up to the “popular base” of Sri Lanka-China relations.

The Chinese Embassy also castigated Pompeo for burdening Sri Lanka with an official visit at a time when the country was experiencing a surge in coronavirus cases.

“Does this approach truly prove your respect to the host country? Is it helpful to local epidemic prevention and control? Is it in the interests of the Sri Lankan people?” the Chinese Embassy asked.