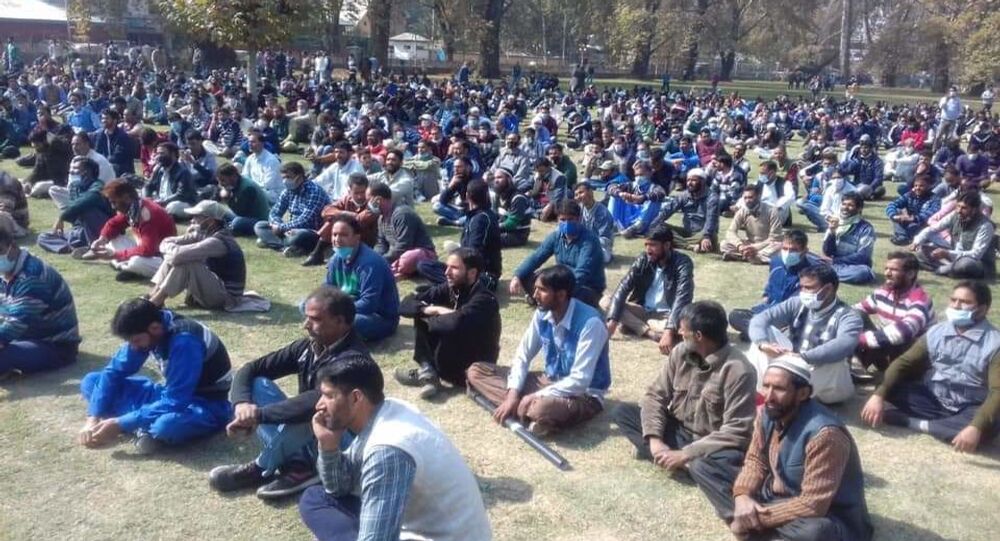 Daily wage earners in India’s Jammu and Kashmir have raised placards with slogans reading “release pending wages from 2014”, “25 years have passed” and “we want justice”. They are demanding that temporary jobs be standardized in all government departments in the state.

A large number of daily wagers working in government departments held massive demonstrations in the capital city of Srinagar, in Jammu and Kashmir, to protest years of wage non-payment. The daily wagers, gathered at the Directorate office at Lal Mandi, stated that they were appointed prior to 1994 but their services have still not yet been standardized in accordance with the law.

The casual workers in various departments, including tourism, forestry and horticulture, among others, have been staging the protests for over two months.

Their plight has remained unchanged, according to reports, despite the abrogation of special status and seizure of direct control in the union territory in August 2019 by the Narendra Modi government.

“It is very unfortunate that the government has not taken any serious review regarding regularization of our services. We put our lives at risk and run government schemes. We are more than 61,000 casual labourers and daily wagers working in different departments for over 25 years,” Imran Parrey, J&K Casual Labourers Front (J&KCLF) told Greater Kashmir.​

The protesters urged Lieutenant Governor Manoj Sinha to look into the matter and frame a job policy to standardize them as well as implement the Minimum Wage Act.