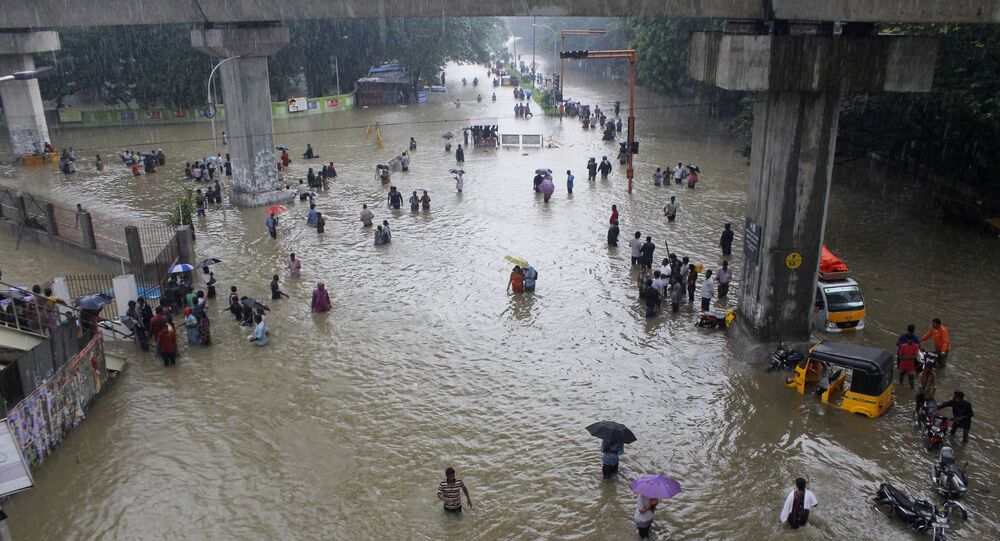 Due to the formation of a low-pressure area over the Bay of Bengal, several regions of southern India like Chennai and other parts of Tamil Nadu have been under the spell of massive rainfall for several days now. Tuesday marks the second day of downpours and storms in the region.

Reflecting the predictions of the Indian Meteorological Department (IMD), the city of Chennai’s skyline was marked by dark, ominous clouds, accompanied by thunderstorms. The rainfall has been varying from region to region in Chennai, as well as in other parts of south India – where some places have witnessed continuous showers and some have seen scattered rain.

Residents of Chennai are using social networks to document the latest of many other ominous days this year; pictures of “monster clouds” hovering over the city have started to trend on Twitter along with the hashtag #ChennaiRains.

​Here is how the present situation looks like in the region.

have a look at monster mode of clouds in #chennairains pic.twitter.com/ZvoBMX9kIg

#chennairains #monsoon can't believe it's 8am in the morning pic.twitter.com/IVNd0HPA5j

​Residents of the region are advising each other to stay indoors on social media as the situation is expected to remain the same or get worse for another day.

​In other southern Indian states like Karnataka and Telangana, nature's fury seems to be lashing out at full strength. Deluge-hit Hyderabad, the capital of Telangana State, parts of which are still flooded, has already recorded the death of around 70 residents.

Over 90 out of 3,406 people rescued from flood-affected areas of Hyderabad have been found positive for coronavirus , the chances of further community spread.

Local traffic in most parts of these southern Indian states has been sluggish due to the rain and flooded roads. Moreover, the availability of food items including vegetables has also gone up due to a shortage of supply and availability.

Is it Shamshabad Airport (Hyderabad) flooded due to heavy rain?? Can anyone verify?#HyderabadRains #HyderabadFloods #Hyderabad pic.twitter.com/F3rCALiylj

​In addition, the state government of the south-eastern coastal state of Odisha has kept the district administrations, especially of the southern and coastal pockets, on high alert amid a forecast of heavy rains by the IMD until at least Thursday, 22 October.