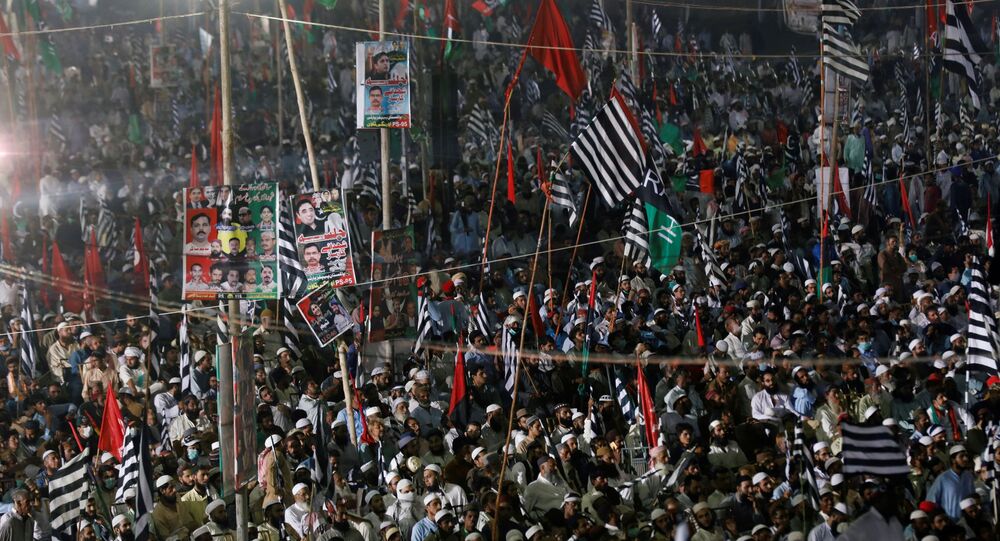 An alliance of 11 opposition parties in Pakistan, led by the Sunni Deobandi cleric Maulana Fazlur Rehman, have called for the staging of a "Long March" to the capital city of Islamabad in January 2021.

The protests by opposition parties that have rocked Pakistan are a sign of the “waning influence” of Islamists and Pakistan's military establishment among the country’s population, veteran Indian Strategic Affairs Expert Qamar Agha told Sputnik on Monday.

“It seems that the mullahs (religious leaders) are starting to lose influence among the people, particularly the youth,” said Agha, who has written extensively on Pakistan during his career as a journalist.

“The losses suffered by Islamic State in Syria have had a direct bearing on the youth’s psyche towards religion,” explained Agha.

“The appointment of Maulana Fazlur Rehman as the leader of the movement is an attempt by (former Prime Minister) Sharif to establish an alternative religious power structure, which is seen as being independent from the Army,” said Agha.

“Nawaz Sharif has backed the appointment of Rehman as the leader of the movement. I suspect that he has been instructed to do so by his benefactors in Saudi Arabia, which has traditionally backed a role for clerics in Islamabad’s power-sharing structure,” he opined.

Pakistan's Prime Minister Imran Khan has accused Sharif, currently in exile in London, of propping up the protests to destabilise his government.

The expert blamed the waning influence of the Pakistan Army on a slew of factors, including both economic and political ones.

“Pakistan Army has always been a stakeholder in the power structure, irrespective of the party in power. The very fact that Army’s name is coming up in these opposition-led protests should be a warning sign for Rawalpindi (where the headquarters of Pakistan Army are located),” explained Agha.

A coalition of 11 opposition parties, under the banner of the Pakistan Democracy Movement (PDM), has accused Prime Minister Imran Khan of rigging the 2019 federal election with support from the Pakistan Army.

The alliance, which comprises representation from ethnic Baloch, Pashtuns and Sindhis, held a massive rally in the port city of Karachi on Sunday, with protesters reiterating their demand for the removal of the Imran Khan government.

Meanwhile, Sharif’s daughter Mariyam Nawaz tweeted on Monday that her husband, Captain Safdar, had been arrested by police at their hotel room in Karachi, hours after she participated in the opposition rally.