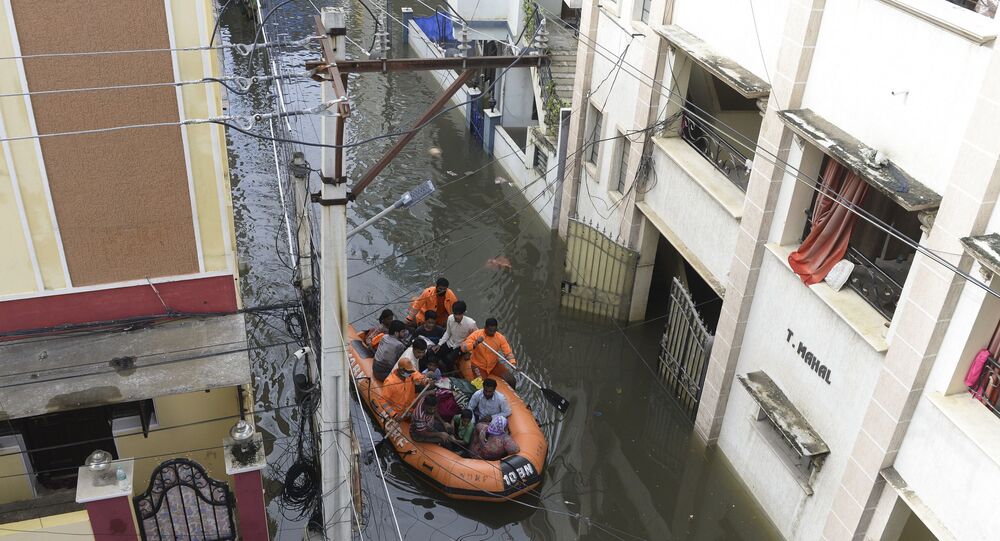 Heavy torrential rains overnight coupled with thunderstorms and no visibility in India's entertainment and financial capital Mumbai, Pune, and other parts of Maharashtra have led to waterlogging in low-lying areas.

Over 47 people have been killed and 80,000 evacuated to relief camps as heavy rains continued for a fourth day on Thursday, causing flash floods in the southern Indian states of Telangana and Andhra Pradesh.

A red alert was issued on 15 October by the Indian Meteorological Department (IMD) for the entire western coastal area of Konkan, including Mumbai and Thane. The National Disaster Response Force (NDRF) and the army have been deployed in the affected areas to help with rescue operations.

Videos of thunderstorms, heavy rain with no visibility, people in flooded streets, and the evacuation process by the NDRF have surfaced on social media.

60mm in last 90 minutes in many parts of South & Central Mumbai. More to come. #MumbaiRains pic.twitter.com/CDPOLpbYlp

​The heartwrenching videos show women and children screaming in the background as floodwater entered the house.

Hyderabad, India is experiencing the heaviest rains the city has seen in more than a century. At least 17 people have died and dozens of colonies are submerged. Prayers to people #HyderabadRain #montysaiyed #prayforhyderabad #hyderabadflood
pic.twitter.com/DpQa1PgVPX

Nature's fury will continue to batter parts of Maharashtra, including Mumbai, Thane, and Pune as the IMD predicted the area will receive heavy-to-extremely heavy rainfall in the next two-three days.

"There is an extremely low-pressure area in the Bay of Bengal and the clouds developed because of it will be hovering over Maharashtra from October 14 to 16", said an IMD official.

"It will result in heavy-to-extremely heavy rainfall over some parts of Maharashtra", he added.

Thirty-two people have died in Telangana since Tuesday, and 15 in Andhra Pradesh in rain-related incidents.

The unseasonal rain is the result of a depression in the Bay of Bengal that has weakened into a low-pressure area. The depression is moving from country's east coast to west coast, making its way towards the Arabian Sea, causing heavy rainfall in the regions crossing its path.