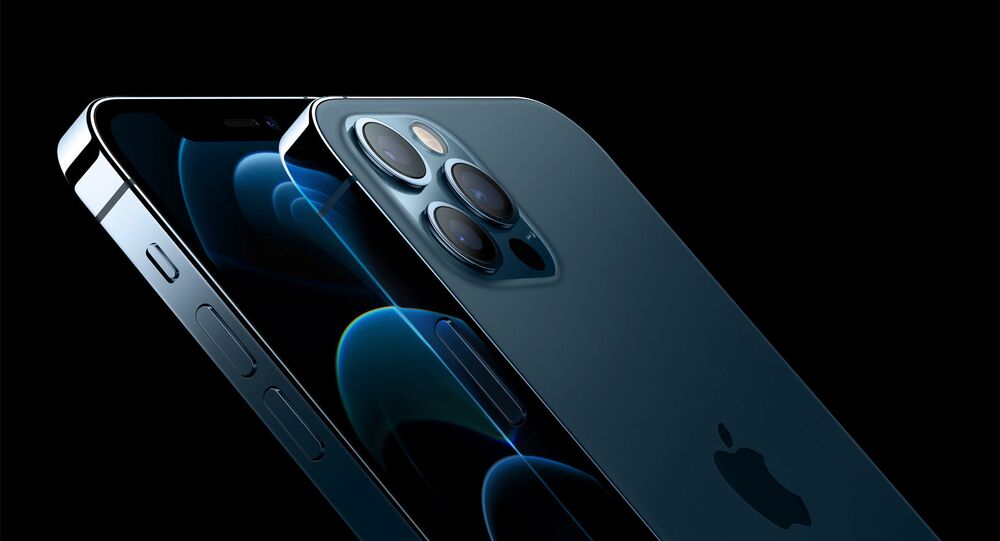 After a year-long wait, Apple has treated its over 728 million fans around the world with the much anticipated line-up of “next gen” 5G-enabled iPhone 12 devices. In a virtual launch, Apple CEO Tim Cook unveiled four new devices in vibrant colour variants – iPhone 12 Mini, iPhone 12, iPhone 12 Pro, and iPhone 12 Pro Max.

People around the world have compared the iPhone 12 Mini – the starting price for which is $699 (INR 51,200 approx.) – to the iPhone 5 that came out in 2012 because of its compact size and 5.4-inch display. Additionally, Apple’s “environmental friendly” decision to sell the new devices without a wall charging adapter and earphones has also drawn heavy criticism online.

© REUTERS / APPLE INC
Netizens Crack Design, Conspiracy Jokes as Apple Unveils New iPhone 12
​Speaking to Sputnik, senior tech expert Jitendra Soni from India – which is the second largest smartphone market in the world with around 700 million users – noted that the “massive” notch on the displays could have been avoided by Apple, as it makes that part of the screen almost vestigial to users.

“Most competitive devices are offering modern bezel-less displays and some brands are even working on under-display cameras, presence of such a huge notch is still pushing a 2018-ish design”, said Soni.

“The latest iPhones are not only the fastest and the most powerful iPhones yet, but they also come with the next generation of connectivity. With iPhone 12 you get improved camera performance letting you shoot cinematic videos, refreshed design, improved battery life and a gaming experience that is unmatched on any mobile device. All of these when coupled with Apple’s ecosystem of products make the new iPhones worth their price”, Soni commented.

In a bid to attract users to spend money on their new products, Apple has discontinued some phones from previous years’ lineup and revised the pricing of some of the phones, making them cheaper than ever.

This time, the new iPhones only come with a USB-C to lightning cable in an effort to “reduce carbon emissions” in both the shipping and production. While announcing that users might have to purchase the accessories separately, Apple revealed that there are more than 700 million wired headphones and two billion Apple power adapters in the world.

#iPhone12 will be released with no charger and no earphones be like.. #AppleEvent

2020: Charger and earphones not included in the box

​Highlighting the “hits” that Apple managed to nail with the new iPhones, Faisal Kawoosa, founder and chief analyst at the Indian tech research firm techARC, told Sputnik that, “looking at the Indian market perspective, the new devices have everything one would be looking for now and tomorrow”, referring to the expected longevity and durability of the fresh lineup.

“It is future-ready, so I don't see any issue in not able to extract value and any concerns which will demand it to be replaced. I have gone through the device details and of now don't see any serious misses. I think enhancements on wireless charging will go well with users in some time”, Kawoosa added.

On 18 September, Apple CEO Tim Cook took to Twitter to announce that the company's first online store would go live in India on 23 September. Cook wrote at the time that “we cannot wait to connect” with nearly 12 million users in India.

We know how important it is for our customers to stay in touch with those they love and the world around them. We can’t wait to connect with our customers and expand support in India with the Apple Store online on September 23! 🇮🇳https://t.co/UjR31jzEaY

​In September 2019, the iPhone-maker invested $1 billion in the Chennai-based facility of its contracted Taiwanese manufacturing partner Foxconn, aiming to export "Made in India" iPhones around the world.

At the time, an additional $13 million was also invested by Apple to expand its retail presence in the country, which stands delayed until 2021 due to the current pandemic.

With the new iPhones, Indian analysts predict that the base iPhone 12 device and the iPhone 12 Mini are expected to do better compared to the other two premium devices in India.