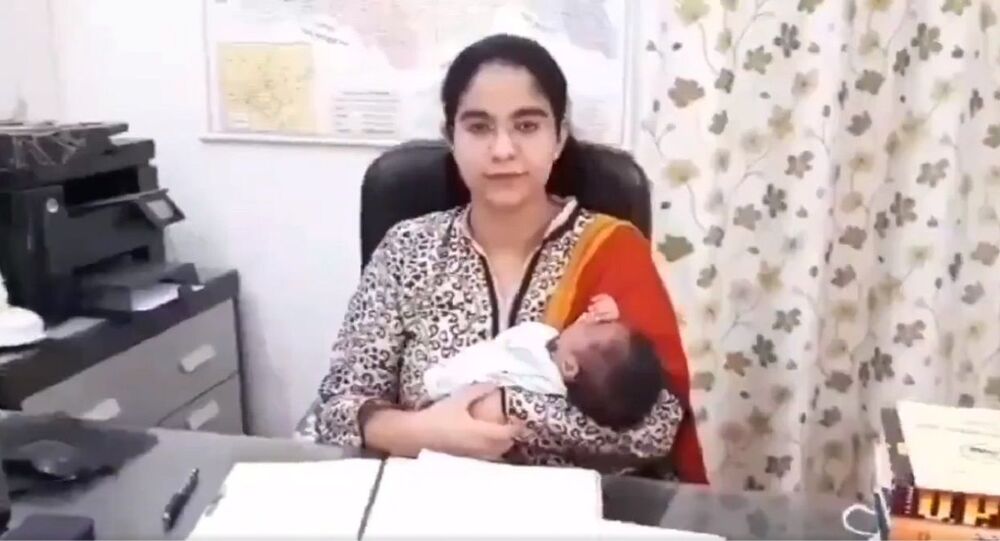 Lakshmibai, the Queen who reigned over the Jhansi region of India back in the 1850s, is still touted as one of India’s most iconic female figures. Not only was she fierce and fearless, but India remembers her for bravely fighting battles while her newborn baby remained tied to her back. But in modern India, practicality is valued over bravery.

A video of Soumya Pandey, a Sub Divisional Magistrate posted in the Modinagar district of India's Uttar Pradesh state, recently went viral on Twitter, showing the officer skipping on maternity leave and returning to work just days after delivering her baby girl.

With the evident intention of inspiring working mothers with this "new age Laxmibai", the video showed Pandey working in her office while holding the baby in her arms.

Pandey pointed out that working women in India do not neglect their professional responsibilities even during the critical months of pregnancy and that under these circumstances, family support really encourages women to keep working.

​The video, which was meant to inspire, ended up garnering blunt and sour comments from netizens who called Pandey "stupid" for "carelessly exposing the newborn to the pandemic".

Some people also accused such videos of promoting an "unrealistic" work culture, pointing out that not all offices allow new mothers to bring their babies to the offices and that women should not be made to feel guilty for taking time to recover.

Stop being stupid & exposing the child to infections while pandemic rages through the world. Stop this kind of pressure on new mothers. Maternity leave is a necessity not a luxury. She will find out when child needs breast feeding every couple of hours in middle of her ‘work’.

Why must this even be an inspiration? Each case is different, and using those 6 months off is not a crime. Neither is it a luxury. If at all one has to work, one can work from home. Many of us did. I desist from speaking of the unnecessary risk the infant is being exposed to.

Besides, rights like Maternity Leave have not come easy. This is exactly the kind of thing that will lead to - “If she can do it, why can’t you” reactions!

Besides how many employers will allow for children to be allowed at work? Most parents would be delighted!

This publicity stunt is certainly at the cost of the infant's life during this pandemic... Surprising she is an IAS... Education served no purpose + no commonsense...

I request the @IASassociation to request this officer to not risk her own and more importantly the child's health.

And posting such videos does send a wrong signal.

​Amid the comments that called this video a “publicity stunt”, some people openly offered shout-outs to the “strong working woman” in Pandey who now has both a baby as well as a career to manage and excel at.

There are crores of mothers who are at various projects, construction sites ... it is common to them carry load as well their child immediately after delivery...Respected SDM Madam is also setting an example in this crucial period of pandemic ... Kudos to all Mothers

​As of now, Pandey has not replied to people questioning her for bringing her baby to the office.

In September, Pandey took a 22-day leave to prepare for delivery, and two weeks after giving birth she resumed work.

Back in 2018, a report by the Genpact Centre for Women’s Leadership, a wing of Ashoka University revealed that 50 percent of working women in India quit their jobs to take care of their children at the age of 30. Even among those who manage to return, 48 percent drop out within four months of resuming work.