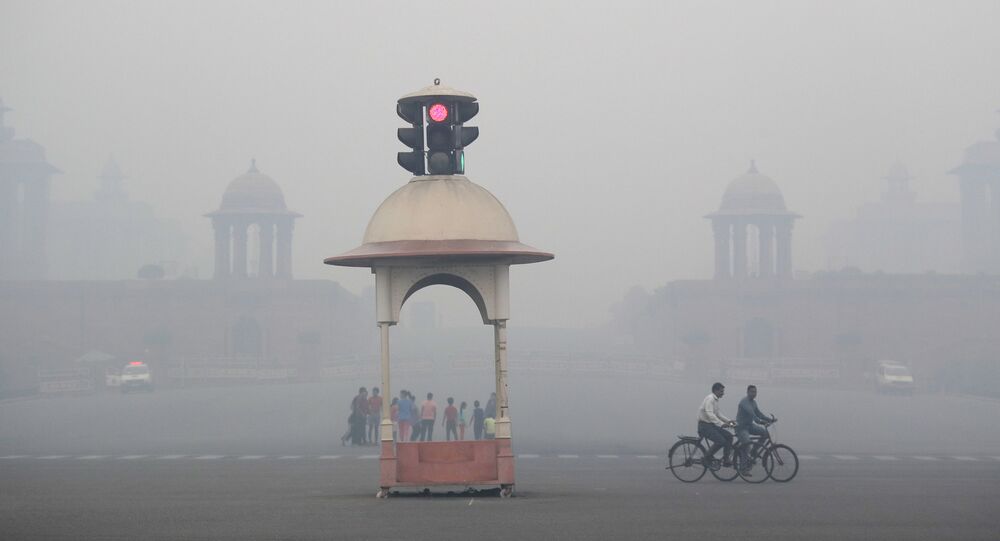 With foggy winters approaching, the biggest festival of the Hindu calender, Diwali, is exactly a month away. Usually, Indians light firecrackers as part of the traditional celebrations, which contributes to air pollution.

Due to six months of restricted vehicle traffic amid the pandemic, air quality in Delhi improved to a “very good” level; however, the burning of "stubble" - post-harvest cut stalks in agricultural fields, has ushered in smoggy skies and horrible air which is expected to linger on until after Diwali – which will fall on 14 November this year.

During this time, farmers in the states of Punjab and Haryana begin to burn off the leftover stubble on their respective fields after crops are harvested.

In a bid to prepare the soil for the next season of seed sowing, it is important for farmers to burn off the stubble -- the cut stalks of cereal plants left sticking out of the ground after the grain is harvested. Once the stubble there starts burning, the ashy smoke gets mixed with air and travels around as “smog”.

Since these agricultural states share their borders with India’s capital New Delhi, the smoggy air gets worse, especially when coupled with pollution caused on a regular basis by factories and the vehicles run and owned by the city's 30+ million residents.

Having suffered through irritable, eye-burning experiences during the previous years, netizens are already advising Delhi State Chief Arvind Kejriwal to announce ways to keep this smoggy time of the year in check.

Good morning! This is the present air quality in New Delhi today. Millions of Children are living in this worst air conditions. pic.twitter.com/yHI7fPMfaA

We are heading towards a festive season as well as winters in very short time...@ArvindKejriwal Delhi can opt for Odd-Even plan without any delay to overcome the pollution and Air quality effect we have faced in past.....@Saurabh_MLAgk @msisodia @moefcc @PrakashJavdekar

And it is here #Delhi because despite media bringing it to the attention of lawmakers, they did nothing to stop this from happening, like last year. Now add to the fact that we are in the throes of a pandemic. #pollution https://t.co/Ga1vCNRcc2

​On 9 October, Kejriwal announced the Delhi government has decided to build a smog tower in the capital’s Connaught Place area to fight the pollution crisis. This will be India’s first smog tower and a budget of around $2.7 million will be allocated for its construction.