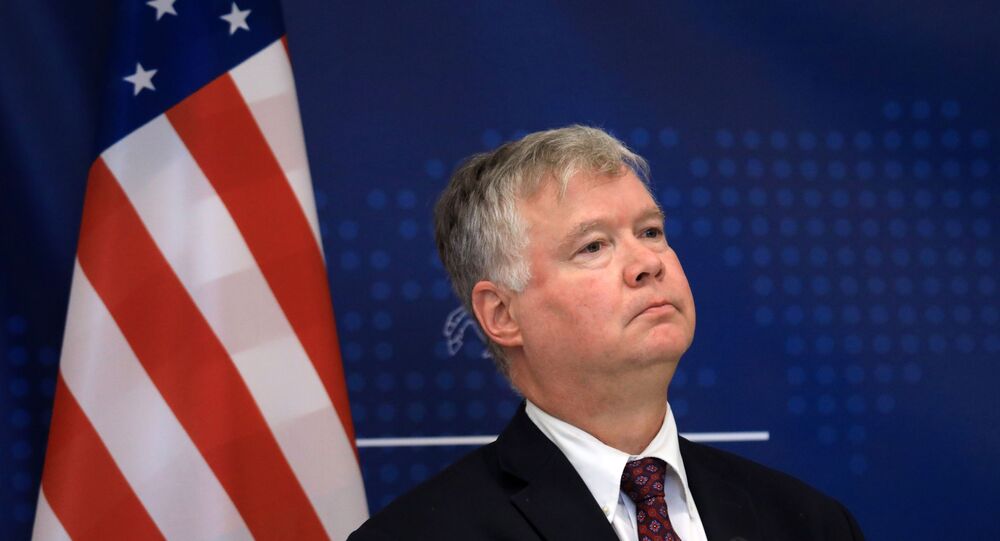 New Delhi and Washington have been “too cautious” in developing strategic linkages among themselves and with other Quad countries because of China, US Deputy Secretary of State Stephen Biegun stated on Monday.

“We have been too cautious,” Beigun said while delivering a keynote address at the India-US Forum in New Delhi on Monday evening. The US Deputy Secretary is on a two-day visit to India, which will be followed by another couple of days in Bangladesh.

“Last week’s important and successful Quad ministerial leaves the United States confident that perhaps, just maybe, we can say that we are present at the creation of those strategic linkages…” Biegun reckoned, referring to the ministerial-level consultations among Japan, India, Australia, and the US in Tokyo on 6 October.

The State Department official noted in his speech that a 2+2 Dialogue between the US and India would be held "later in the year", but did not divulge any specific dates.

Beigun cited an earlier statement by India’s former ambassador to China Ashok Kantha during his speech to highlight that the Quad grouping was “still a work in progress”.

“A relationship with the United States helps in our dealings with China, more so in a situation where the capability gap between India and China is increasing day-to-day. We have to work with like-minded countries, and that includes the United States, Japan, Australia and many other countries,” said the US official, who quoted the former Indian envoy to Beijing in his address.

“So much more effort needs to be put in to flesh out the idea of the Quad and see how it can become an effective lateral grouping,” he added, quoting Kantha further.

Biegun stated during his speech that the US “certainly benefits” from a “strong and prosperous” India.

He expressed confidence that India and the US would continue to bolster their partnership, regardless of the outcome of the US Presidential vote scheduled for 3 November.

© REUTERS / DANISH SIDDIQUI
India, China Set for 7th Round of Military Talks Over Ladakh Border Dispute
“And our cooperation can come in far more ways than in the past, particularly with the advance of technology, the shifts in global economic influence, and changing geopolitical circumstances,” he said during his speech.

Biegun conceded during his speech that the post-World War 2 alliances between the US and countries in the Indo-Pacific region needed “rejuvenation” to reflect the geopolitical realities of the times.

The significant remarks by the US Deputy Secretary of State come amid a five-month old military standoff between China and India in the eastern Ladakh region.

During the seventh round of military commander-level talks between the countries on Monday, New Delhi reportedly asked for total disengagement of People’s Liberation Army (PLA) troops from eastern Ladakh, which straddles the de-facto and disputed Line of Actual Control (LAC) border between the two Asian neighbours.