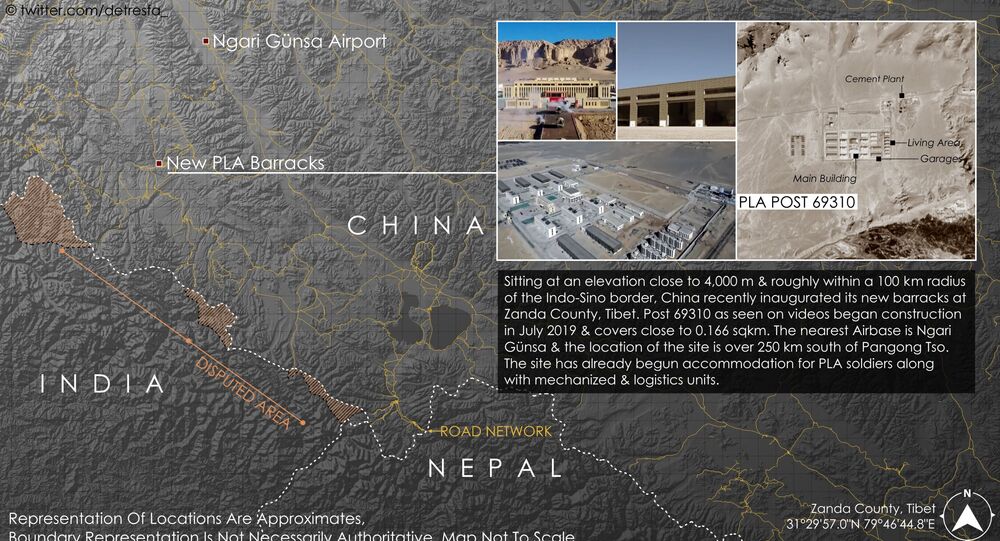 As India's ties with Nepal deteriorate over the latter issuing a map claiming territories contested by New Delhi, the Indian and Chinese armies continue to face-off in Ladakh, the heart of the heightened tensions. China has reportedly been amassing troops and heavy artillery in the area since a mid-June clash that left 20 Indian soldiers dead.

The purported PLA camp is located at an elevation of 4,000 metres and lies within a 100-kilometre radius of the India-China border.

China also reportedly inaugurated barracks in Zanda County, Tibet and released a video on Chinese media about the affair.

​The area where the new camp has purportedly been built is in close proximity to the Indian boder state of Uttarakhand.

According to media reports, China has deployed almost 50,000 troops to the Depsang area of Ladakh since May. An abundance of artillery, troops, rocket launchers, and tanks can now be seen in the Depsange area.

India is locked in a border conflict with two of its neighbours–China and Nepal. Both India and Nepal claim territory that lies at the tri-junction of India, Nepal, and China. The area of Kalapani and Lipulekh is contested both by India and Nepal, but Kathmandu also recently claimed Limpiyadhura as its own territory by issuing a new political map.

The Indian and Chinese armies have locked horns in different sectors of the Ladakh region since the last week of April, but the situation became ever more tense after the two countries engaged in a violent face-off on 15 June. Diplomatic and military-level talks are currently being held between the two sides to defuse the situation.