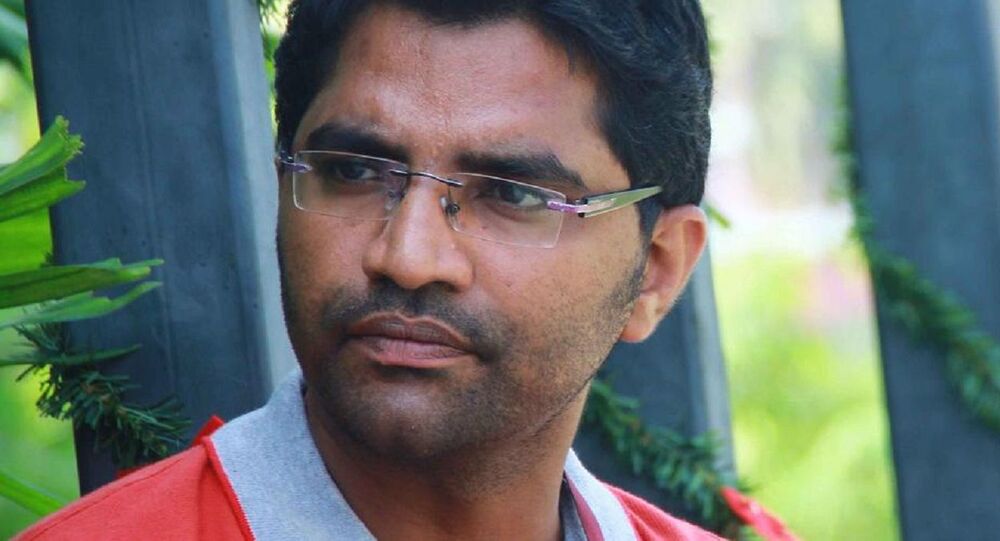 Indian filmmaker Sajin Baabu from Kerala state made his debut at the age of 26 with his first feature film “Unto the Dusk”. His recent movie “Biriyaani - Flavors of Flesh” has been winning accolades, and it has appeared at over 20 international film festivals.

Basking in the glory of the success of his movie “Biriyaani - Flavors of Flesh”, Indian filmmaker Sajin Baabu’s film has won the Best Actress Award for the protagonist Kani Kusruti at the 5th BRICS Film Festival held during the 42nd Moscow International Film Festival (1-7 October).

The movie revolves around a woman, Khadeeja (Kani), and her mother (Shailaja Jala) who are forced to conceal the woman's desires in the name of religious and societal norms. When fate brings Khadeeja to an abandoned life, she chooses to be a sex worker.

Sputnik spoke to Sajin about where he got the inspiration for the story and the challenges he faced while shooting at a mosque, among other things.

Sputnik: Your movie “Biriyaani - Flavors of Flesh” bagged the Best Actress Award for Kani Kusruti at the 5th BRICS Film Festival held at the 42nd Moscow International Film Festival. How do you see this success?

Sajin Baabu: It’s a great honour not just for us but for the entire Malayalam language Independent Film Community of India to have won at one of the top international festivals. Kani (the protagonist) is a fantastic actress and so is Shailaja Jala, who has beautifully portrayed the role of a mother.

This win has helped the movie in getting noticed. BRICS countries are prominent in film production and film festivals are a great way to promote good cinema and culture worldwide, especially those movies that aren’t mainstream.

Sputnik: The movie delves into a woman’s state of mind and the circumstances that drives her to rebel against society and Islam. Where did you get the idea from?

Sajin Baabu: It began with a thought of what happens with family or close ones of people named to join (sic) ISIS (the Daesh terror group). At the same time, how the Muslim religion expects a woman to be confined to the four walls of their house. I have seen it from close quarters how they are treated. That eventually became part of this movie.

More than the religious issues, I’m trying to bring to light how the majority of men see their women as an object of fulfilling their desire. Also, the lack of freedom a woman faces in her family and society.

Sputnik: The crew members were almost beaten up while shooting at a mosque… How did you manage to finally shoot?

SaajinBaabu: We were shooting in Aathangara Mosque in Tamil Nadu state with due permission from its trust. When we started shooting, a few devotees created trouble, saying shooting inside a mosque is “Haraam” (sin). We had to stop.

We tried guerrilla shooting by covering the camera with a towel. Instead of saying “action”, we used to call out the characters' names - Khadeeja or Suhrabeebi - and the actors would start acting. We completed most of the scenes this way. But we had to give up this also, as we were about to get beaten up when the same devotees found out that the shooting was going on. We completed the remaining two-three scenes in Chitranjali Film Studio in Trivandrum, Kerala state, where we recreated the mosque.

Sputnik: How has your journey been as a filmmaker?

SaajinBaabu: I grew up in a village in India’s Kerala state between all the religious communities. At a certain point in life, I felt that I must live without the background of any religion. So, I left my home at the age of 17, pursued higher studies in BA LLB (law) and did all odd jobs. When I did my first movie, I was 26 and had a lot of questions within myself which I tried to put through my movies.

By my name, people often find it difficult to determine my religion. After seeing my first feature film “Unto The Dusk” (in Malayalam language), some thought that I’m a Christian. After watching “Biriyaani”, I looked as a Muslim. Sadly, in my conversation with this confusion, I’ve often seen that the well-known secularist talks about religion more than the fundamentalists. There was still a lot of it, especially concerning religion, which was further explored in my second film “Ayaal Sassi”, and now in “Biriyaani”.

SaajinBaabu: Definitely! Even in this movie, I’ve tried to show a woman's point of view, but I’m not sure how much I’ve succeeded, as I might have the limitations of being a man. Ideas of intersectionality have helped me in shaping the main character.

Sputnik: Which other international film festivals has this film been to?