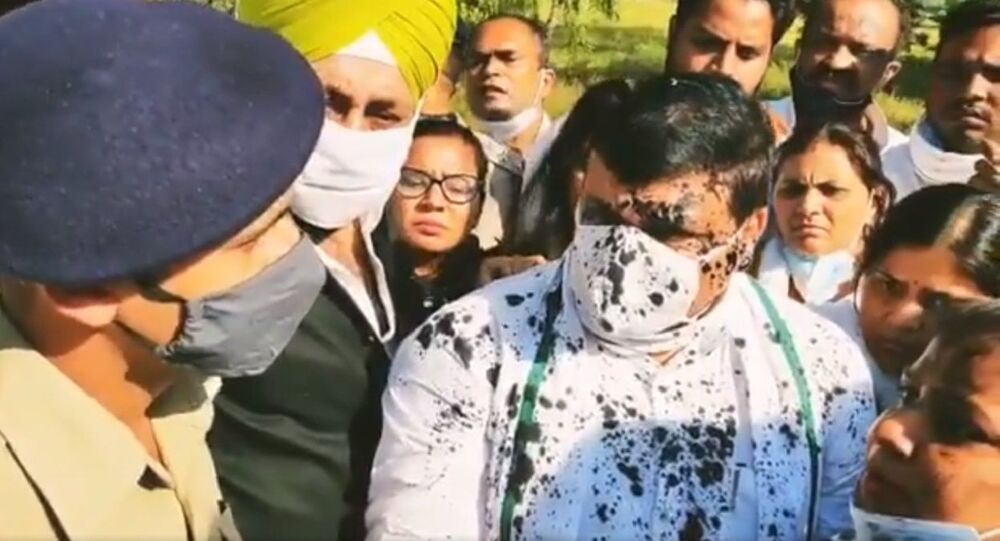 The Hathras district of Uttar Pradesh has been hogging headlines since the alleged gang rape and death of a 19-year-old girl. According to the victim's family, she was raped by four men from the village last month. The victim succumbed to her grievous injuries at a Delhi hospital on 29 September, sparking protests across the country.

The four persons accused in the alleged murder and gang rape of a 19-year-old girl in Hathras have written to the state police in India's Uttar Pradesh, claiming that they are innocent and actually being framed.

In the letter, accessed by Sputnik, the main accused Sandeep has provided details of the incident and claimed that it is an honour-killing case instead of alleged gang rape and murder.

He has claimed being an acquaintance of the deceased girl and having been in touch with her, but he says her family always opposed their friendship.

Sandeep, in his letter to police, also said that he along with three others are being framed by the victim's family.

The letter, which denies any sort of violence against the victim by the accused, bears a thumb impression, as a signature, of the four accused identified as Sandeep, Ramu, Lavkush, and Ravi.

Officials at the jail where the four have been lodged have confirmed to Sputnik that the accused did indeed write a letter.

Earlier this week, Uttar Pradesh police made claims, based on a call detail record (CDR) of the main accused and a relative of the Hathras victim, that the girl's brother, whose name is also Sandeep, was in constant touch with the accused over the telephone.

The victim's brother, however, has flatly rejected the claims, saying he did not speak with the accused.

The victim's family has claimed that on the day of the incident they along with the girl, were cutting grass in a nearby field in their village. While they were busy working in the fields, the girl was allegedly taken away by the group of four men, who gang-raped her and thrashed her.

The victim suffered severe injuries to her spine and a deep cut on her tongue. The victim was rushed to a nearby hospital. However, as her condition deteriorated, she was later shifted to Delhi's Safdarjung hospital where she died days later.

Following her death, the case took on a political angle and opposition parties have since been slamming the ruling Bharatiya Janata Party government in the state over the law and order situation and improper handling of the girl's purported gang rape and murder case along with her cremation at night by local authorities.