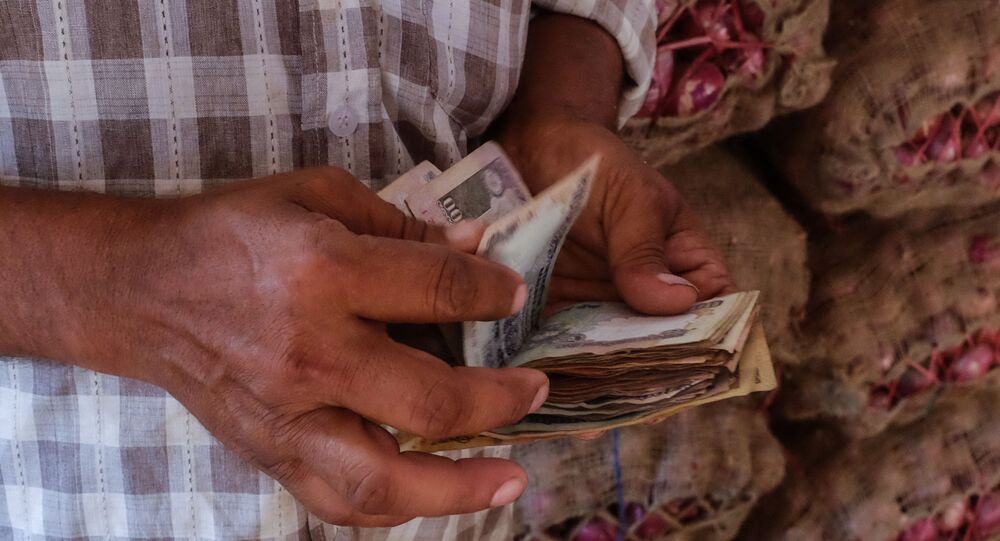 The Indian economy nosedived between this April and June, with GDP contracting 23.9 percent in the trimester that saw a strict lockdown due to the pandemic. The Indian government later announced a $266 billion stimulus package, while the apex bank pumped $125 billion in liquidity into the financial system to bail out the COVID-hit economy.

The Monetary Policy Committee (MPC), headed by the governor of India's apex bank, the Reserve Bank of India (RBI), has begun its deliberations on policy lending rates. A final decision by the panel on the lending rates will be announced this Friday.

The MPC paused rate reductions in its August policy announcement due to higher inflationary pressure in the Indian economy.

The repo rate — the rate at which the RBI lends to commercial banks — was kept unchanged at 4 percent. In RBI's opinion, a rate cut would have stoked inflation, which is already out of the apex bank's tolerance level.

© CC BY 3.0 / Nick Youngson / Federal Reserve
US Federal Reserve’s Plan to Hold Benchmark Rates at Zero for 3 Years a Boon for India, Experts Say
Retail inflation of 6.69 percent in August and 6.73 percent in July was over the RBI's upper tolerance limit of 6 percent. Even though growth needs to be brought back to the Indian economy, it remains to be seen whether the MPC maintains the status quo or reduces the key lending rate.

When the COVID-19 pandemic hit in March, the RBI brought the rate down by 1.15 percent in two off-cycle policy rate announcements to mitigate the impact of the crisis.

Analysts now think that the RBI will pause a further rate reduction for the time being.

Economist Teresa John from the brokerage house, Nirmal Bang Securities, observed in a report that, "we expect a pause at the upcoming MPC meeting with Consumer Price Inflation (CPI) ruling above the 6% upper boundary for most of the past nine months".

"We see the possibility of a rate cut in December if CPI inflation sustains its downward trajectory over the next two months and if the RBI has sufficient visibility on CPI inflation abating to around 4% levels in December and beyond. We continue to expect about 50 basis points of additional rate cuts in the financial year 2020-21 (April 2020–March 2021)", John added.

Analysts also point out that retail inflation for the month of September will be on the higher side due to increased prices of vegetables jeopardising any possibility of a rate cut. The September inflation data will be released on 12 October.

© AP Photo / Rajanish Kakade
Curious Case of Creeping Inflation in India as Demand Remains Disrupted by COVID-19 Pandemic
"We note that tomato, onion, and potato (TOP) prices are up 21.5 percent month-on-month (MoM) on average in September versus an increase of 2.6 percent MoM in August", said Kaushik Das, the Chief Economist, Deutsche Bank Research, in a report on MPC.

"Overall, the average price of 22 food items, as reported by the Department of Consumer Affairs, is up 3.7% MoM in September compared with only a 0.7% MoM increase in August. This could potentially lead to a 1.3-1.5 percent MoM increase in CPI food prices in September, which may result in pushing up the September headline CPI inflation to 7.0-7.1% against 6.7% in July and August", Das added.

Keeping inflationary pressures at bay has been one of the RBI's key deliverables.

By its own admission, during the last monetary policy announcement on 6 August, the RBI had attributed supply side constraints, caused by the national lockdown, as being one of the reasons for the firm increase in inflation.

According to the Monetary Policy Framework Agreement between the Indian government and the RBI, flexible inflation targeting was adopted. It was mutually agreed to have an inflation target of 4 percent, with an upper tolerance limit of 6 percent and lower limit of 2 percent.

The decided inflation target has been applicable since August 2016 and will remain in force until March of next year after which both the RBI and the government of India will review the situation.

The RBI has taken liquidity measures worth $125 billion since the pandemic hit to maintain stability on India's financial markets.