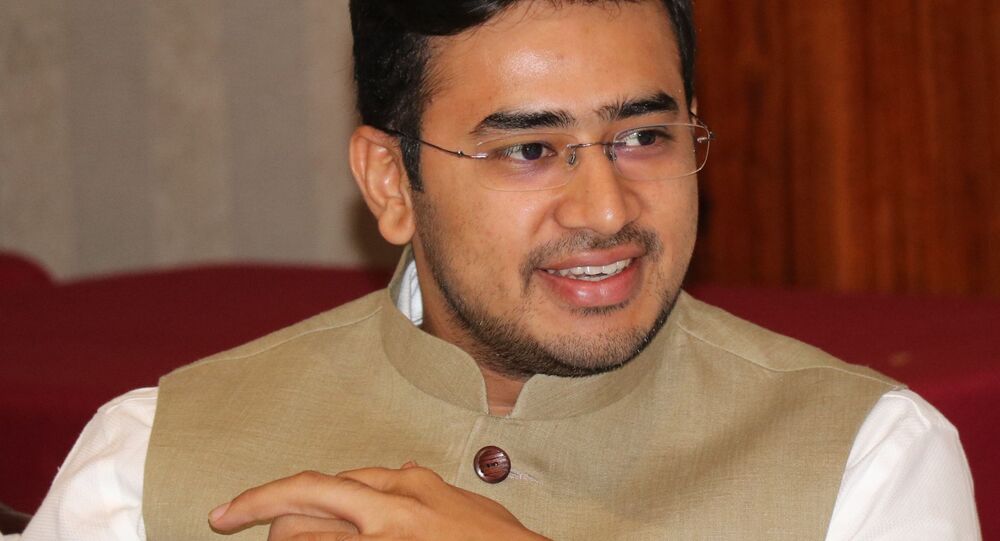 Tejasvi Surya, a 29-year-old MP from India's ruling Bharatiya Janta Party (BJP), has been a vocal supporter of the Citizenship Amendment Act, which fast-tracks citizenship applications for persecuted minorities from Bangladesh, Pakistan, and Afghanistan. Surya has been accused of making derogatory statements against Muslims in the past.

Indian outfits across Europe on Tuesday extended their support for parliamentarian Tejasvi Surya, after the 29-year-old leader from India's governing BJP faced boycott calls from other groups ahead of a keynote address at the "India Start-Up Conference 2020" on 7 October in Hamburg.

Among those who expressed solidarity with Surya, appointed chief of the BJP's youth wing last month, were groups based in Denmark, Spain, and France.

The Indian diaspora in Spain warmly welcomes Shri @Tejasvi_Surya and his address at "The Indian Startup Conference" to be held in Hamburg, Germany. Shri Tejasvi Surya is an eloquent speaker, youth icon, and future of India @IndiainHamburg @eoiberlin @vijai63

​The event to promote start-ups and boost economic relations between the German city of Hamburg and the South Asian country is being organised by the Indian Consulate in Hamburg.

© CC0
'95% of Arab Women Never Had Orgasm': BJP Lawmaker Draws Wrath on Twitter For Deleted Tweet
On 2 October, ten outfits from across Europe addressed a letter to the Indian Consulate General, questioning the government representative over providing a platform to Surya. The letter was endorsed by India Solidarity Germany, Indian Alliance Paris, Global Sikh Council, and International Dalit Solidarity Network, among others diaspora outfits.

"It is extremely concerning to see an official platform is being given for such a controversial figure which will achieve nothing but further division and right-wing radicalisation on German soil", read the letter.

"This person is famous for publicly stating that anyone who is against Prime Minister Narendra Modi is an anti-national. It's shameful for a parliamentarian to even make such statements", it added.

The communication went on to cite Surya's past comments on India's Citizenship Amendment Act (CAA) as well as those about Arab women. During his address to a rally in support of the CAA, Surya called members of the minority community opposing the legislation "uneducated" and "illiterate".

"95 (ninety-five) percent [of] Arab women never had orgasms in the last few hundred years", the Indian MP also tweeted in 2015. The resurfaced tweet created massive outrage among Arab social media users last year, prompting him to take his post down.

The signatories to the letter called upon the Indian authorities to retract Surya's invitation, also urging the event organisers to "remain true to the European values of inclusiveness, diversity and human rights for all".